The champion of the FE, Vergne, delivered the community service for the radio message – Formula E

July 15, 2019 Sports Comments Off on The champion of the FE, Vergne, delivered the community service for the radio message – Formula E 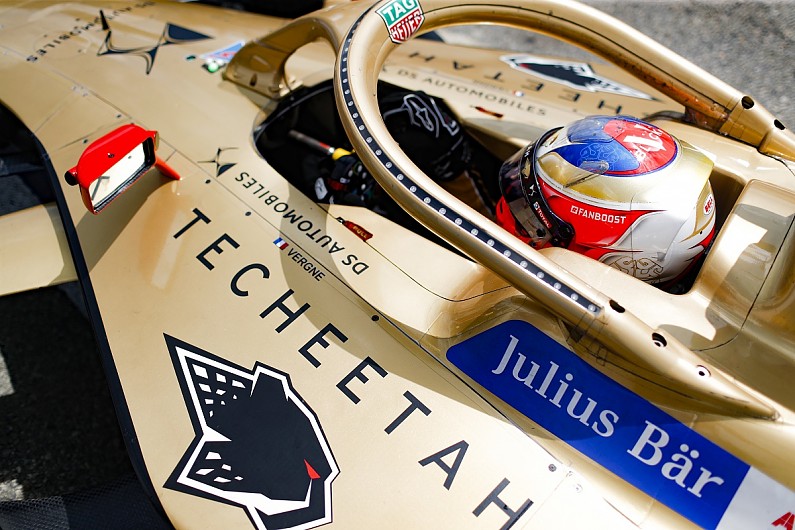 Jean-Eric Vergne received one day of community service for unsportsmanlike behavior in the first Formula E race in New York due to comments made on the team's radio.

The punishment does not affect his victory in the ABB FIA FE championship of 2018/19 or his results in New York this weekend.

The decision to provide community service to Vergne is related to Article 12.3.1c of the FIA ​​sports code.

The governing body can grant this sanction at its discretion, which is why Max Verstappen attended the FE Marrakech race in January after pushing Esteban Ocon after the Brazilian Grand Prix of Formula 1 2018.

It is not yet clear how Vergne will serve his community service, but he must do so within the next six months.

Autosport has listened to Vergne's team radio after his participation in the first build-up in the inaugural race in New York, which also involved his teammate DS Techeetah, Andre Lotterer.

With the two cars Techeetah damaged, Vergne twice asked his team to tell Lotterer to stop on the track to cause a safety car.

Then he asked if the team had heard him and Techeetah said yes.

It is not clear when, in the race, the messages were made by Vergne and he was confronted due to a puncture on the return of the accident while Lotterer continued.

On the next lap, Lotterer crashed into the second corner with his front wing caught under his car, though he continued and returned to the pits for repairs.

Regarding the penalty, Vergne told Autosport: "Yes, if I asked all the other drivers in F1 or Formula E, they would have asked the same thing.

"You crawl, you see your teammate one lap down, the car is broken, the front wing like this on the wall, it's normal [to ask].

"Everyone would ask the same thing, it's not like he's running to position himself with the car well." I asked him to put it. [the car] on the wall as something in the past that has happened. "

Vergne had suggested that Audi participated in the punishment and said: "Audi was very angry because my team protested them yesterday, so they found something to protest us, as simple as that."

Audi denied complaining to Vergne about the problem when he was contacted by Autosport.

Speaking before his punishment became official, Vergne said he was happy to be given an example of whether that prevented other drivers from repeating the offense.

"I'm happy for the pain they give me to give an example that drivers, and myself included, should stop complaining on the radio to try to make things happen for their own benefit," he said.

"In Formula 1, everyone is doing this and [in] Formula E too. I will be happy to take the blame so that we stop complaining about things for our benefit to create and take out a safety car, and bring another penalty for another driver.

Decision of the administrator in its entirety:

The radio communications of the equipment in question suggested that the driver of the automobile 25 asked his engineer to direct his teammate, the driver of the car 36. [Lotterer], to stop his car on the circuit and have the race director call a safety car during round 12.

The stewards heard the driver of the car 25 and the manager of his team. The relevant excerpts of the radio communications were played. The driver of car 25 acknowledged that he had called his engineer during round 12 and made the following statements:

"Tell Andre to stop … take out the Safety Car."

Mr. Vergne said that these messages were transmitted in the following context: the radio communications of the equipment in question suggested that the driver of the car 25 asked his engineer to direct his teammate, the driver of the car 36, to stop his car on the circuit to have the race director call a security car during round 12.

He was concerned about his safety and that of other drivers due to debris on the runway and made a request to his engineer to ask the car to stop just for that reason.

The driver of the car 25 said he recognizes that his messages could be misunderstood. He recognized, with the benefit of hindsight, that the messages were inappropriate, especially because they had been made on an open channel that is available to the public through the E-App and which, he knew, could be overseen by the official the race.

The commissioners said that the car engineer 25 did not respond to Mr. Vergne's messages.

The commissioners accept the explanation of Mr. Vergne, but the obligation of an athlete of this level is to act fairly and correctly and as a role model for other drivers at all levels of motor sport.