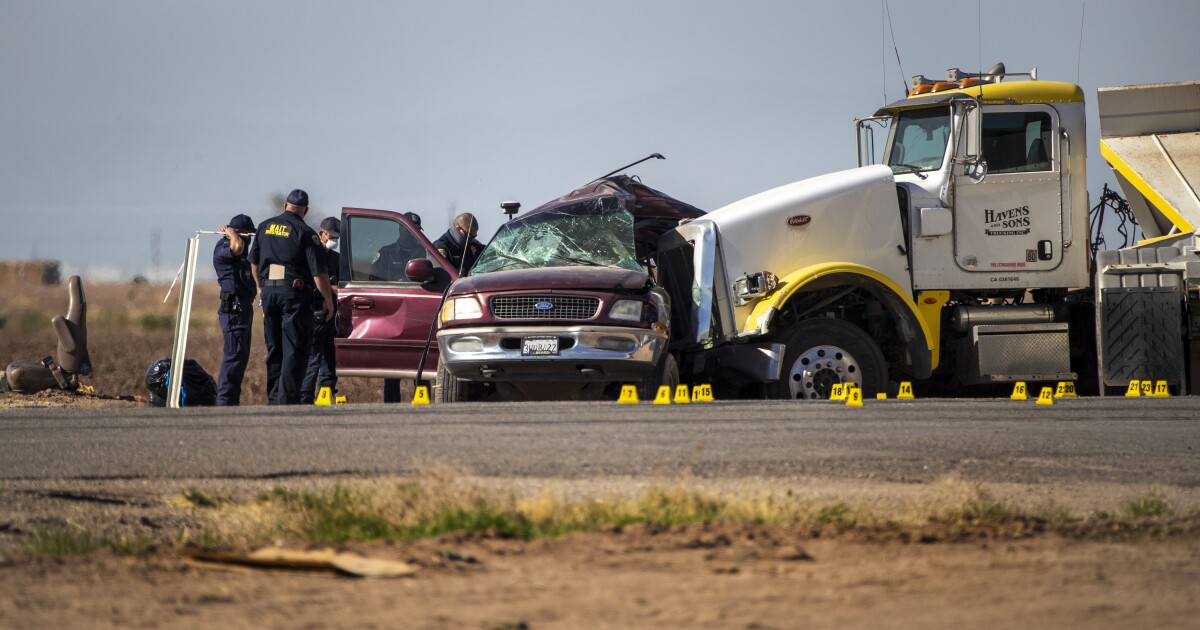 The truck carrying 25 people that was struck by a large platform Tuesday morning, killing 13, had recently crossed from Mexico, possibly through a breach in the border wall, federal officials said Wednesday.

Surveillance footage of a 10-foot gap in the border fence near the Gordon’s Well exit off Interstate 8 showed that the truck may have been one of two vehicles seen leaving the area that morning, according to Customs. and US Border Protection.

“Initial investigation into the origins of the vehicles indicates a potential link to the aforementioned breach in the border wall,” said Gregory Bovino, chief patrol agent for the Border Patrol’s El Centro sector, in a press release. “Human traffickers have shown time and again that they have little regard for human life. Those who are contemplating crossing the border illegally should stop to think about the dangers that too often end in tragedy; tragedies that our Border Patrol agents and first responders are very familiar with. “

Several of the 25 people crammed into the Ford Expedition were thrown from the vehicle onto the road by the force of the impact, California Highway Patrol Chief Omar Watson said Tuesday. Everyone involved was killed or injured, Watson said.

An ICE official said Tuesday that the agency had launched “an investigation into human trafficking.”

Macario Mora, a spokesman for the Yuma and Customs and Border Protection sectors, said in a statement to The Times that agency personnel were not pursuing or following the vehicle at the time of the accident, but had responded to the scene. upon request. from the Imperial County Sheriff’s Department.

“CBP personnel were not involved in the accident,” Mora said.

At least 10 of the dead were Mexican citizens, said Roberto Velasco Álvarez, who heads the North American Department of the Mexican Foreign Ministry.

“We continue to be in close collaboration with the authorities with the aim of helping the dead and injured Mexicans,” Velasco said on Twitter. “We offer our condolences and reaffirm our commitment to the families of those who lose their lives.”

When Elizabeth Strater, a spokeswoman for the United Farm Workers, learned of the accident, her heart skipped a beat. He thought of farmworker car accidents in the past, where employers would put workers in unsafe vehicles.

The UFW took to Twitter on Tuesday, citing a bus accident that killed 19 farm workers in 1974 and another that killed 13 tomato pickers in Fresno County in 1999. Initially, Strater said, the organization thought those involved in the Tuesday’s accident could have been farm workers, but evidence from the scene persuaded them otherwise.

“We thought, based on geography, that it was likely to be the transportation of farm workers,” Strater said. “Once we realized that it wasn’t a bus or a van, that started to change.”

Strater also looked at the photos of the debris and noticed something was missing: lunch boxes.

“It certainly doesn’t give you any relief to think ‘Oh, it’s not the farm workers,'” he said.

The exact details of the incident were still being unraveled Wednesday. The large rig was traveling north on State Highway 115 and the Ford was heading west on Norrish Road at the time of the accident, Watson said. The semi rammed the left side of the smaller vehicle and pushed it onto the shoulder.

“At this point, it is unknown whether or not the SUV stopped at the stop sign,” Watson said. “For reasons that are still being investigated, the Ford Expedition entered the intersection in front of the large platform.”

In a collision report released Tuesday night, the CHP said the semi-driver, Joe Beltran, 68, was from El Centro.

He suffered moderate injuries and was airlifted to Desert Regional Medical Center in Palm Springs, along with three of the van’s passengers, according to CHP officials. The vehicle he was driving, a 2011 Peterbilt semi, belonged to Havens and Sons Trucking Inc. of El Centro. Several calls to the company were not returned.

The report says the driver of the truck, a 28-year-old from Mexicali, south of the border, died.

“At this time it is unknown whether alcohol and drugs were a factor in the collision and whether seat belts were used,” the report says.

Other injured passengers were treated at El Centro Regional Medical Center; Pioneers Memorial Healthcare District in Brawley, about 20 miles away; Scripps Mercy Hospital in San Diego and UC San Diego Medical Center. At least one has already been discharged. Others remain in serious condition with a variety of traumatic injuries.