The Bayeux Tapestry – historic, yes, but is it okay? | Art and Design 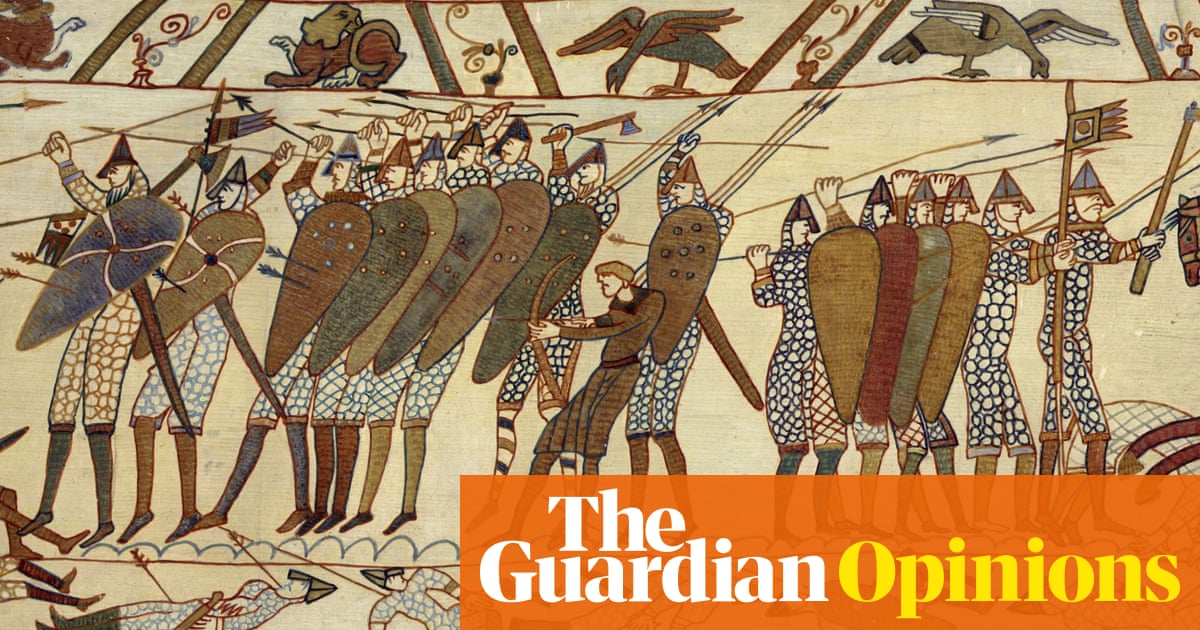 I If you want to know why the Bayeux Tapestry really matters, why it is one of the most important works of art in the world and not just a corny part of the British heritage, the place to start is not the famous one scene of Harold putting it in the eye at the Battle of Hastings, or even the wonderful image of Halley's comet that was embroidered 600 years before Halley, but a much more disturbing detail: a representation of an atrocity of war.

When the Normans established a beachhead on the south coast, two men set fire to a Saxon house. You can see from his dull eyes that they are just following orders. In front of the burning building, on a smaller scale than the burly arsonists, a woman holds her child's hand while asking for humanity with a dignified and civilized gesture.

The Bayeux Tapestry is not just a fascinating document of a decisive battle in British history. It is one of the richest, strangest, most immediate and unexpectedly subtle war depictions ever created. That burning house is not the only detail that undermines the myth of chivalry. At the height of the battle, the lower margin of the 70-meter comic, which began as a parade of bizarre beasts, turns into a carpet of corpses, with wounds painted gracefully (a man has no head). Horses are also shown as victims of war. As they run to the fray, two fall terribly, landing on their heads and necks. Another horse runs wildly in terror among mutilated human bodies.

Not a single horror of war is hidden. Nor are their little ironies. Bishop Odo de Bayeux, half brother of William the Conqueror, enters the heart of the struggle with a huge wooden club. As an ecclesiastic he can not wield a sword, but there is nothing in the Bible about the brain of people with oak.

The "pacifist" details in the Bayeux Tapestry impress some viewers for being so subversive that they must have been made in Britain by Anglo-Saxon women who filled it with seditious subtexts. That's a remote Brexity possibility. The first records of the tapestry suggest that he has always been in Normandy. In addition, his honesty about the war is part of a larger picture that paints (sorry, stitches) to Duke William as a chivalrous, big-hearted hero whose kindness to Saxon Harold was rewarded with treason. What man should do less when his lord breaks an oath that build a fleet, kill his enemy and change the course of British history?

The ambivalence of the Bayeux tapestry is what makes it so mysterious and majestic. While its creators will always be anonymous, surely it is the perspective of the embroiderer women that helps them see so many sides of this ego story triggered by the male ego. It is both a propaganda narrative of the Norman conquest and a totally honest exposition of the brutality of the battle. Nor is it only black and white; on the contrary, it is red and yellow, brown and blue, and is full of details of daily life: workers who build boats and castles, a herd of hunting dogs, mail coats, sacred relics and roasted meat.

France's loan of this powerful thing to Britain is truly generous and exciting. The Bayeux Tapestry is much more than a chronicle of distant events or a symbol of national identity. It is a disarming human window in a world that is not so different from ours, an era of cruelty and comedy, small pleasures and sudden deaths. Like Chaucer's Canterbury Tales, this medieval treasure speaks eloquently to the modern world because it is a true image of life in all its joy and sadness. We should be excited.