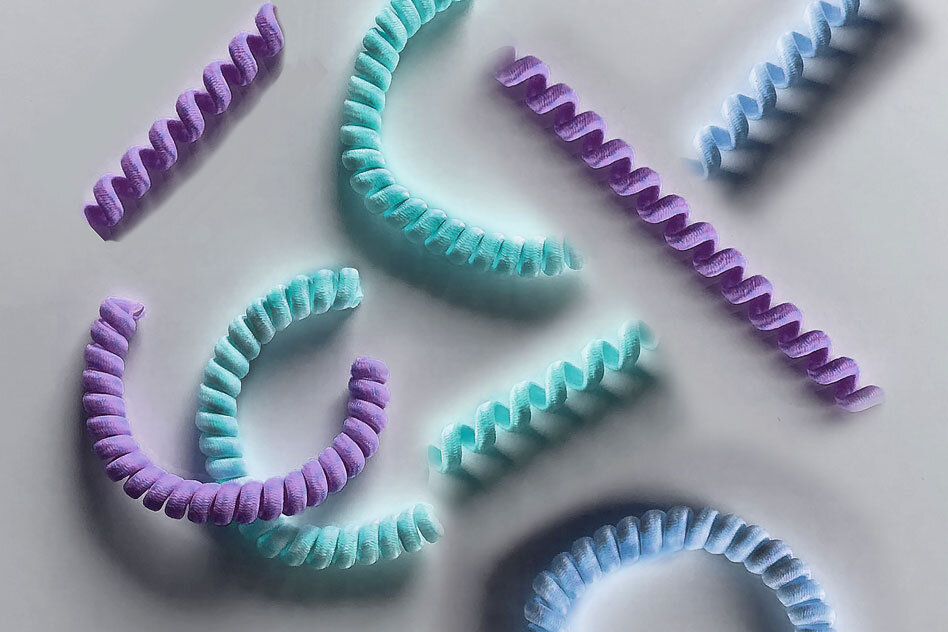 The human body is held together by an intricate system of tendon and muscle cables, designed by nature to be tough and highly stretchable. A lesion in any of these tissues, particularly in a major joint such as the shoulder or knee, may require surgical repairs and weeks of limited mobility to heal completely.

Now MIT engineers have devised a tissue engineering design that can allow a range of flexible movement in damaged tendons and muscles during healing.

The team has designed small coils aligned with live cells, which they say could act as elastic scaffolds to repair damaged muscles and tendons. The coils are made of hundreds of thousands of biocompatible nanofibers, tightly twisted in coils that resemble a rope or nautical thread in miniature.

The researchers coated the wire with live cells, including muscle and mesenchymal stem cells, which naturally grow and line up along the thread, in patterns similar to muscle tissue. The researchers found that the coiled wire configuration helps keep the cells alive and growing, even as the equipment stretched and folded the thread several times.

In the future, researchers imagine that doctors could cover damaged tendons and muscles of patients with this new flexible material, which would be covered with the same cells that make up the injured tissue. The elasticity of the "thread" could help maintain the range of movement of a patient while the new cells continue to grow to replace the injured tissue.

"When you repair muscles or tendons, you really have to correct your movement for a period of time, using a boot, for example," says Ming Guo, an badistant professor of mechanical engineering at MIT. "With this thread of nanofibers, the hope is that you will not have to use anything like that."

Guo and his colleagues published their results this week at the Procedures of the National Academy of Sciences. His MIT co-authors are Yiwei Li, Yukun Hao, Satish Gupta and Jiliang Hu. The team also includes Fengyun Guo, Yaqiong Wang, Nü Wang and Yong Zhao, from Beihang University.

Stuck in the chewing gum

The new nanofiber yarn was partly inspired by the group's previous work on the lobster membranes, in which they discovered that the resistant and elastic bottom of the crustacean is due to a layer structure of plywood. Each microscopic layer contains hundreds of thousands of nanofibers, all aligned in the same direction, at an angle that is slightly offset from the layer just above and below.

The precise alignment of the nanofibers makes each individual layer highly stretchable in the direction in which the fibers are arranged. Guo, whose work focuses on biomechanics, saw the natural elastic design of the lobster as an inspiration for the design of artificial fabrics, particularly for regions of the body with great stretch, such as shoulder and knee.

Guo says that biomedical engineers have incorporated muscle cells into other elastic materials such as hydrogels, in an attempt to create flexible artificial tissues. However, while the hydrogels themselves are elastic and resistant, the embedded cells tend to break when stretched, like tissue paper stuck in chewing gum.

"When a material like the hydrogel is greatly deformed, it will stretch well, but the cells can not stand it," says Guo. "A living cell is sensitive, and when you stretch it, it dies."

Shelter in a slinky

The researchers realized that simply considering the stretching ability of a material would not be enough to design an artificial tissue. That material would also have to be able to protect the cells from the severe stresses produced when the material is stretched.

The team looked for inspiration in the real muscles and tendons, and observed that the tissues are made of strands of aligned protein fibers, wound together to form microscopic helices, along which the muscle cells grow. It turns out that, when the protein coils are stretched, the muscle cells simply rotate, like small pieces of tissue paper stuck in a slinky.

Guo sought to replicate this natural, elastic and protective structure of cells as an artificial tissue material. To do so, the team created hundreds of thousands of aligned nanofibers for the first time, using electrospinning, a technique that uses electrical force to extract ultrafine fibers from a solution of polymer or other materials. In this case, it generated nanofibers made of biocompatible materials such as cellulose.

Then, the team grouped the aligned fibers and twisted them slowly to form a spiral first, and then an even tighter coil, which ultimately resembles the thread and measures approximately half a millimeter wide. Finally, they planted live cells along each spiral, including muscle cells, mesenchymal stem cells and human bad cancer cells.

Then, the researchers repeatedly stretched each coil up to six times its original length, and found that most of the cells in each coil were still alive and continued to grow as the coils were stretched. Interestingly, when they planted cells in looser, spiral-shaped structures made of the same materials, they found that the cells were less likely to stay alive. Guo says that the structure of the tighter coils seems to "protect" the cells from damage.

In the future, the group plans to manufacture similar coils from other biocompatible materials, such as silk, which could ultimately be injected into an injured tissue. The coils could provide temporary and flexible scaffolding for new cells to grow. Once the cells successfully repair an injury, the scaffold can dissolve.

"It is possible that one day we can embed these structures under the skin and that [coil] the material will be digested over time, while the new cells remain in place, "says Guo. The good thing about this method is that it is really general and we can try different materials. This can push the limit of tissue engineering a lot. "