The 1964 Olympics certified a New Japan on steel and screen 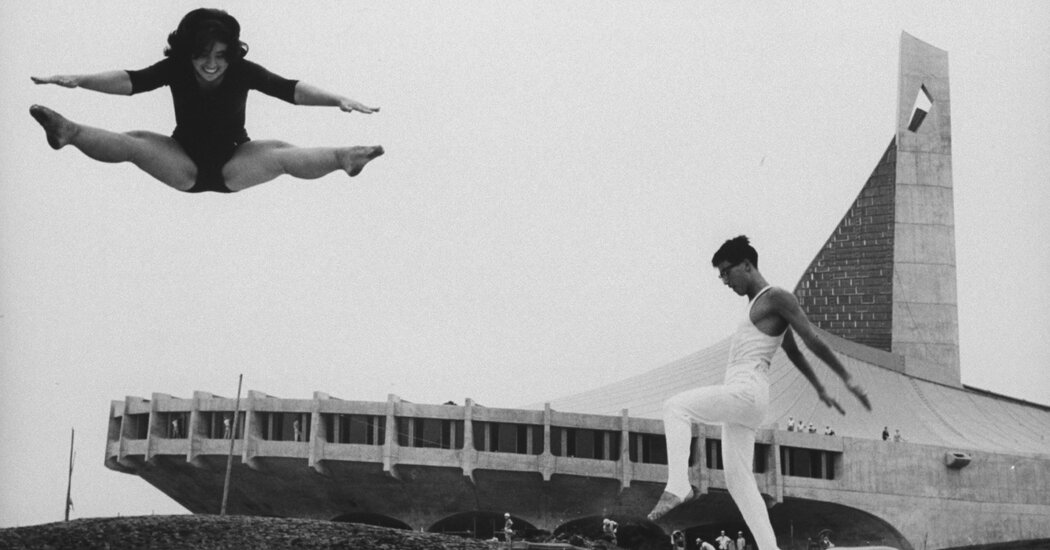 This weekend should be the midway point of the Summer Olympics in Tokyo, which must have gathered skateboarders – the world’s leading runners, jumpers, throwers, lifters and – for the first time in the world’s most populous city. The fan club of May Simone Biles forgave me, but the event I was most excited about was handball.

Not for the game, but for the stadium: Handball matches were to take place at the Yangogi National Gymnasium, a milestone of Japanese modern architecture designed by Kinzo Tangay. The stadium is defined by its massive, sinking roof, made up of two bridges – steel pillars between concrete pillars, like a suspension bridge – and vertical ribs that flow downward from those axes to the floor. Years ago, biking through Yoyogi Park, I remember stopping dead before the soldered roof panels of the gymnasium, marveling at the steel canopies. It may be the most glamorous venue of this year’s Olympics, even though it was built more than half a century ago.

The coronovirus epidemic has forced the first postponement of the Olympics: Tokyo 2020, its name unchanged, will now be in July 2021 if it happens at all. Yet there is another Olympic legacy around the Japanese capital: the 1964 Summer Games, which transformed Tokyo’s 20-year-old firebombed ruins into an ultramodern megalopolis. (In fact, the “Summer” games were held in the autumn; organizers thought that October to July in Tokyo would be smarter than swallowing.) Those first Tokyo Olympics marked the debut of democratic, post-war Japan. Served, which not only reintroduced through the world. Game but also through design.

The preparations transformed Tokyo into a city-wide construction site. Author Robert Whiting, who was stationed with the US Air Force in Tokyo in 1962, describes piled drivers and jackhammers who gave a “massive attack to the senses”. Pedestrians came to know about face masks and earplugs, and salaried drinkers in bars protected by dust-blocked plastic sheets. Japan dropped out a few years before it became the world’s second largest economy, and the 1964 Olympics was to be a major boost to economic revival and recognition.

Trolleys went out, highways came up. The city received a new sewer system, a new port, two new metro routes and severe pollution. Slums and their inhabitants were ruthlessly cleared to make room for new construction, some of which are grand – such as the exquisite Hotel Okura, designed by Yoshiro Taniguchi (father of Moma architect Yoshio Tanuguchi) in 1962 Went – and a lot is forgettable. The new Shinkansen, or bullet train, debuted between Tokyo and Osaka for the first time just one week before the opening ceremony. Not until 2008, when the Games were booming in Beijing, would an Olympics change a city and nation so profoundly.

Tokyo was also awarded the Games once before; It was in 1940 to host the canceled 1940 Olympics, succeeding the Nazi spectacle in Berlin. The architects and designers of the 1964 Games had to fulfill a clear ideological goal: it was to be New Japan, pacifist and so forth. dawning is largely free of classical Japanese aesthetics or traditional national symbols. No Fuji, no cherry blossoms, and any calligraphy. And any expression of national pride had to be as far removed from the old imperial militarism as possible.

Given the look of Tokyo ’64, Dean of Japanese graphic designers Yusaku fell to Kamekura, who mimicked modern design from Bauhaus-trained professors of Tokyo’s Institute of New Architecture and Industrial Arts. Where previous Olympic posters relied on figurative, often explicit Greco-Roman imagery, Kemkura fulfilled Tokyo’s ambitions for the ingenuity of the symbol: five interlocking rings, all gold, the sun rising by a giant red disc.

Kamekura’s posters did not meet the Orient’s Western expectations for “hard” clean, modernity. Even more impressive, it rebooted the Japanese flag – which was banned during the first years of all American occupation – as a symbol of a democratic state. The same bold aesthetic will also feature Kamakura’s second (and for 1964, technically challenging) Olympic poster, with a full-bleed, split-second photograph of the runners against a black background.

The main event and athletic events did not take place at certain stadiums, which have since collapsed. At Komazawa Olympic Park in Setagaya, a control tower designed by Yoshinobu Asihara took the form of a 165-foot-tall concrete tree; It still stands, though its brutal candor is softened with a shell of white paint. However, there was some small stadium in Yeogi, designed by Tangye – which would go to the construction of Tokyo’s sprawling city hall and its Sophia Coppola-sanctioned Park Hyatt Hotel – which was expressed in concrete, which came from Kaimakura and Other designers did it on paper.

In 1964 swimming, diving and basketball events were hosted at Tangay Stadium, and its marriage and marriage of kinetics was broadcast more vigorously than any other that Japan had restored, even Also rebirth. From the outside, it looks like two wrong parts of a shredded pair, rendered in steel and concrete, though its real novelty was the roof. Its tensile structure is detailed on the recently completed hockey serin of Hockey Serin at Yale University, and even more, the Phillips Pavilion at the Brussels World Fair, designed in 1958 by their hero Le Corbusier.

The 1964 Olympics were the first geostationary satellite for commercial use to be broadcast worldwide, and Japanese families with a growing household budget could also see the Games in color. Nevertheless, in director Kon Ichikawa’s three-hour documentary “Tokyo Olympiad”, the most enduring images of Tokyo ’64 appeared in the cinema. The telephoto lens in the new cinema, with the “Tokyo Olympiad” shot in rich colors in a wide Cinemascope format, with several lengths of track, is the largest film ever made about the Olympics. (You can stream it on Critian Channel from 1912 to 2012 with a lot of drier movies of the games.)

Unlike Lenin Riefenstahl’s “Olympia”, which prefigures the Berlin Games with Aryan athlete-gods in Greek drag, the “Tokyo Olympiad” plunges us into modernity from its opening sequence: a blazing sun against a red sky – Japanese flag, upside down – sabotage slamming into shortcut pylons in a wrecking ball. The building’s face powders, bulldozers collide with distant debris. We crowd to see the stadium, then the torch relay, and then the young foreigners arriving at Haneda Airport in a haze of tanga. Inside the stadiums, telephoto lenses allowed Ishikawa to get astonishing close proximity to the sprinters ‘sweat and the swimmers’ gooseflesh, but often they blurred almost abstract scenes of fencers and cyclists into streams of color.

The “Tokyo Olympiad” has champions and record-breakers, but they share screen time with the final-placed finishers. Gold-medal matches consist of intercuts with unseen details of participants taking part in the triple jump track, or officers being kept away from metal balls. The Japanese Olympic Committee hated the film and gave another commission; Nationalist boosters call it inconsistent or worse. But the distillery was Tokyo ’64’s hallmark of Ichikawa’s national ambition, and the “Tokyo Olympiad” became Japan’s biggest domestic box office success, a record that would stand for four decades.

Whether they are in 2021 or not, the upcoming Tokyo Games will certainly have a calmer cultural impact than their predecessor. The first logo for Tokyo 2020 is believed to have been thrown out based on plagiarism. The first stadium also: Zaha Hadid’s early design was dumped, and a more quiet and less expensive wooden stadium was built in his place, designed by architect Kengo Kuma.

If Tangay’s steel and concrete expressed Japanese ambitions in 1964, it is natural materials that point to a vision of the future whose challenges are just as economically ecological. But Mr. Kuma, who participated in the 1964 game as a child, credited Tangay’s Pounce Stadium as the trigger for his own architectural career. “Tangay treated natural light like a magician,” Mr. Kuma told the Times two years ago, reminiscing on his childhood exploration of Joeyogi National Gymnasium. “From that day on, I wanted to be an architect.”