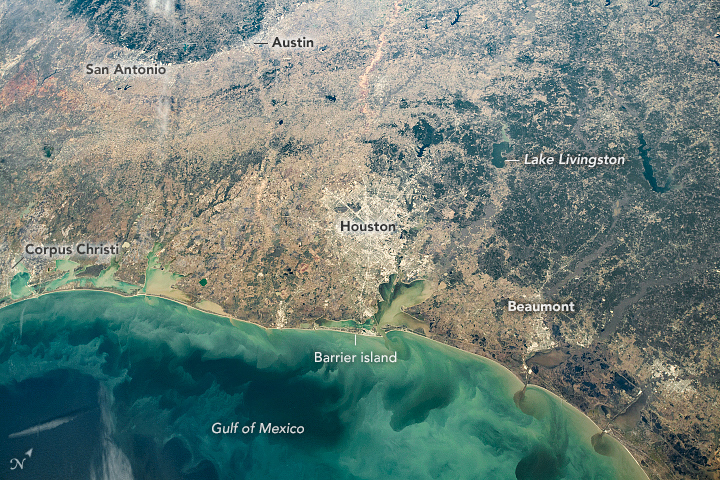 An astronaut aboard the International Space Station (ISS) took this photo of the Texas Gulf Coast. The field of view is roughly the same as that seen by astronauts with their unaided eyes from the station windows. The photograph focuses on Houston, home of NASA’s Johnson Space Center, where astronauts live and train. They get some of their education from the Earth Science and Remote Sensing Unit, which works with them to achieve the various science goals of astronaut photography of Earth.

Bordering the Texas coast are long, narrow barrier islands that create protective bays between the Gulf of Mexico and the mainland. The Gulf Coast region is a hub for offshore oil and gas drilling and associated infrastructure. Channels between the barrier islands allow ships to carry crude oil products to ports and refineries along the bays, especially Corpus Christi, Houston, and Beaumont.

East of Houston, pine forests and swamps dominate the coastal landscape. Several artificial reservoirs have been built to seize the rivers that flow towards the coast. The greater Houston area relies on nearby reservoirs like Lake Livingston for its water supply. Although groundwater exists in the aquifers below Houston, limits have been placed on groundwater withdrawal to reduce land subsidence in the region.

To the west and northwest of Houston, the cities of San Antonio and Austin border a central Texas geographic region called the Edwards Plateau. The region marks changes in topography, geology, ecology and climate from flat, humid coastal wetlands to rocky hills with forests (dark green in the image). The area is regionally known as the Texas Hill Country.

Astronaut photograph ISS064-E-15994 was acquired on December 25, 2020 with a Nikon D5 digital camera using a 24-millimeter lens and is provided by the ISS Crew Earth Observations Facility and Unit Earth Sciences and Remote Sensing, Johnson Space Center. The image was taken by a member of the Expedition 64 crew. The image has been cropped and enhanced to improve contrast, and lens artifacts have been removed. The International Space Station Program supports the laboratory as part of the ISS National Laboratory to help astronauts take photographs of the Earth that will be of great value to scientists and the public, and to make those images freely available at Internet. Additional images taken by astronauts and cosmonauts can be viewed at NASA / JSC Gateway to Astronaut Photography of Earth. Caption by Andrea Meado, Jacobs, JETS contract at NASA-JSC.