Bloomberg analysts have found that Tesla Inc’s (NASDAQ: TSLA) The allocation to Bitcoin may have been a turning point in favor of the leading cryptocurrency.

What happened: “The rule of money flowing where it is best treated appears to be a lasting tailwind for Bitcoin. If one of the most important members of the S&P 500 continues to sink, we see the foundations for the potential global digital store of value improve, ”said Mike McGlone, senior commodities strategist in Bloomberg’s Crypto Outlook for April. 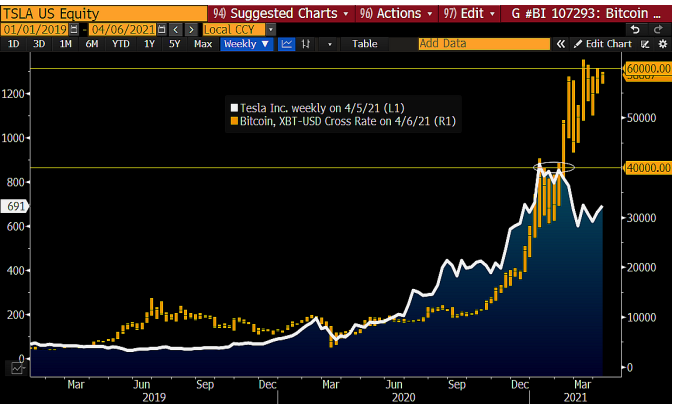 McGlone’s statements were referring to a graph showing the price of Tesla falling 25% since its Bitcoin allocation announcement on March 25, while the price of Bitcoin grew 35% during the same period.

According to Bloomberg, the upward trajectory of the price of the digital asset has also had positive implications for the Grayscale Bitcoin Trust (OTCMKTS: GBTC) – The largest Bitcoin fund that has unusually traded at a significant discount to its NAV over the past month.

Because it is important: “Grayscale Bitcoin Trust is gaining advantage over Tesla, ”states the Bloomberg report.

“We believe that the bullish fundamentals of the Grayscale Bitcoin Trust (GBTC) are gaining traction as it outperformed Tesla by almost 50% this year.”

The report finds that the falls in GBTC towards its 50-day moving average have attracted receptive buyers who can offset the “additional discount” if GBTC becomes a publicly traded fund.

According to a recent statement from Grayscale Investments, the fund is 100% committed to converting GBTC into an ETF.

“Bitcoin’s continued outperformance versus Tesla is a key narrative we look forward to in 2021,” Bloomberg analysts concluded.