Tensions rise after Israel blows up tunnel from Gaza 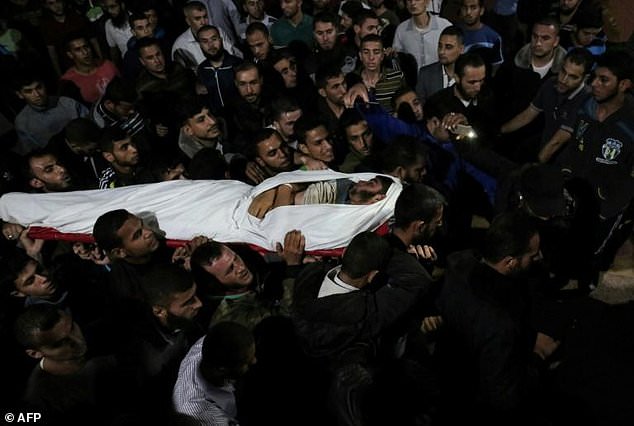 The body of Palestinian Marwan Alagha, 22, is carried by mourners in the Gaza Strip after he was killed when Israel blew up what it said was a tunnel stretching from Gaza into its territory

Tensions rose Tuesday after an Israeli operation to blow up a tunnel from the Gaza Strip killed seven Palestinian militants in one of the deadliest incidents since a devastating 2014 war.

The seven men, from the armed wings of Gaza’s rulers Hamas and allied group Islamic Jihad, were killed Monday when Israel blew up the tunnel it said had crossed into its territory and was intended for attacks.

They were being buried Tuesday in their respective neighbourhoods in the Gaza Strip.

Hamas leader Ismail Haniya appeared at a funeral in central Gaza attended by a few thousand people, witnesses said, while senior Hamas figure Khalil al-Hayya spoke at one in the southern part of the strip.

“(Hamas) knows how to manage the conflict with the enemy and how to get revenge and strike at the time and place that hurts the enemy,” Hayya said, according to a statement.

Hamas and Israel have fought three wars since 2008 and the last conflict in 2014 was waged in part over tunnels from Gaza that were used to carry out attacks.

Israel said it had been monitoring the digging of the tunnel for an unspecified length of time and was forced to act after “the grave and unacceptable violation of Israeli sovereignty.”

It said the operation was carried out on the Israeli side of the border and stressed it was not seeking a further escalation.

No tunnel opening had been found on the Israeli side of the border. It had come from the vicinity of the city of Khan Younis in the Gaza Strip, Israeli’s military said.

Israeli Prime Minister Benjamin Netanyahu said Tuesday his country would “not tolerate any attacks on our sovereignty, on our people, on our land, whether from the air, from the sea, from the ground, or below the ground,” he said.

“We attack those who seek to attack us.”

The operation comes at a sensitive time, with rival Palestinian factions Fatah and Hamas pursuing a reconciliation accord aimed at ending their 10-year rift.

Hamas is due to hand over control of the enclave’s borders to the Palestinian Authority on Wednesday under the deal mediated by Egypt and signed on October 12.

It is due to return the Gaza Strip to full PA control by December 1.

“The response to this mbadacre… is to move forward towards the restoration of national unity because the enemy realises our strength is our unity,” Haniya said. 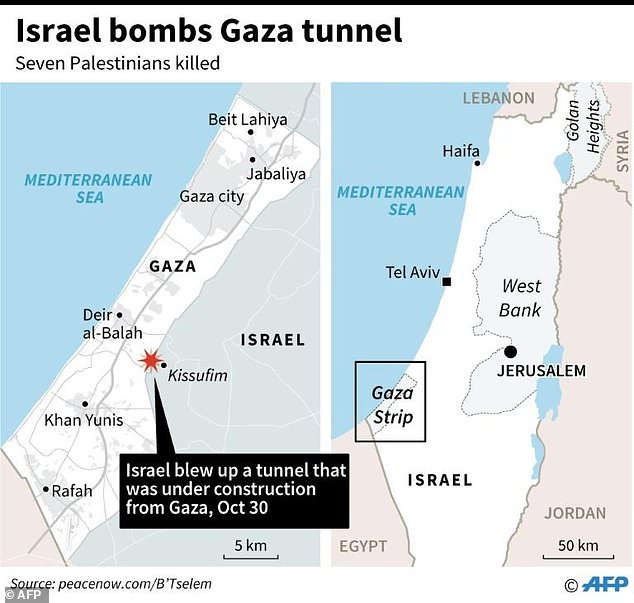 Separately in the West Bank on Tuesday, Israeli forces opened fire on a “suspect” vehicle, killing one Palestinian and wounding another, Israel’s army and the Palestinian health ministry said. There did not appear to be any connection.

Hamas forces have used tunnels in the past to enter Israel and carry out attacks, but discoveries of those stretching into Israeli territory since the end of the 2014 war have been rare.

In April 2016, Israel’s military said it had located and destroyed a tunnel extending from the Gaza Strip into Israel in the first such discovery since the 2014 conflict.

An army spokesman said Monday that Israel used advanced technology to locate the tunnel but declined to elaborate.

The army has been seeking to build an underground wall surrounding Gaza that would block such tunnels, among other methods it has been developing.

Israeli leaders have been keen to show they are addressing the threat of tunnels from the Gaza Strip.

A state inquiry in February accused Prime Minister Benjamin Netanyahu and top army brbad of being unprepared for the tunnels used by Hamas during the 2014 conflict.

Hamas has ruled Gaza since a near civil war with Fatah, based in the occupied West Bank, in 2007.

Since then the Islamists have fought three wars with Israel, while Gaza’s two million citizens have suffered as Israel has blockaded the strip.

Egypt’s border with the enclave has also remained largely closed in recent years.

Wednesday’s scheduled handover of the border crossings is a first key test of the Hamas-Fatah reconciliation deal. 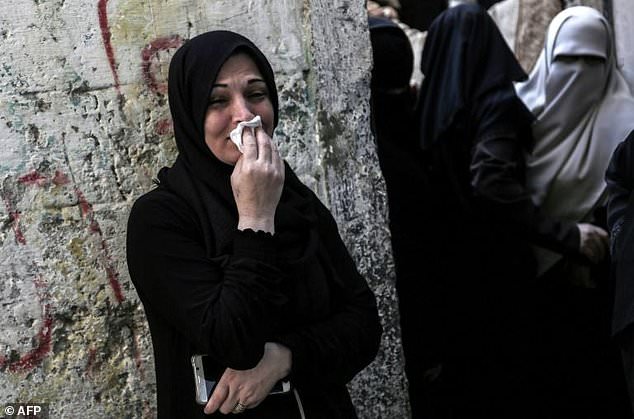 Relatives mourn in Khan Yunis, in the southern Gaza Strip, on October 31, 2017, during the funeral of Palestinians who were killed the previous day in an Israeli operation to blow up a tunnel stretching from the Gaza Strip into Israel

Israel has said it will reject any unity government that includes Hamas if the Islamist group does not disarm and recognise the country, among other demands.

During the 2014 war, 32 tunnels were discovered, including 14 that extended into Israel, according to a UN report on the conflict.

On the Israeli side, 74 people were killed, all but six of them soldiers.

Sorry we are not currently accepting comments on this article.