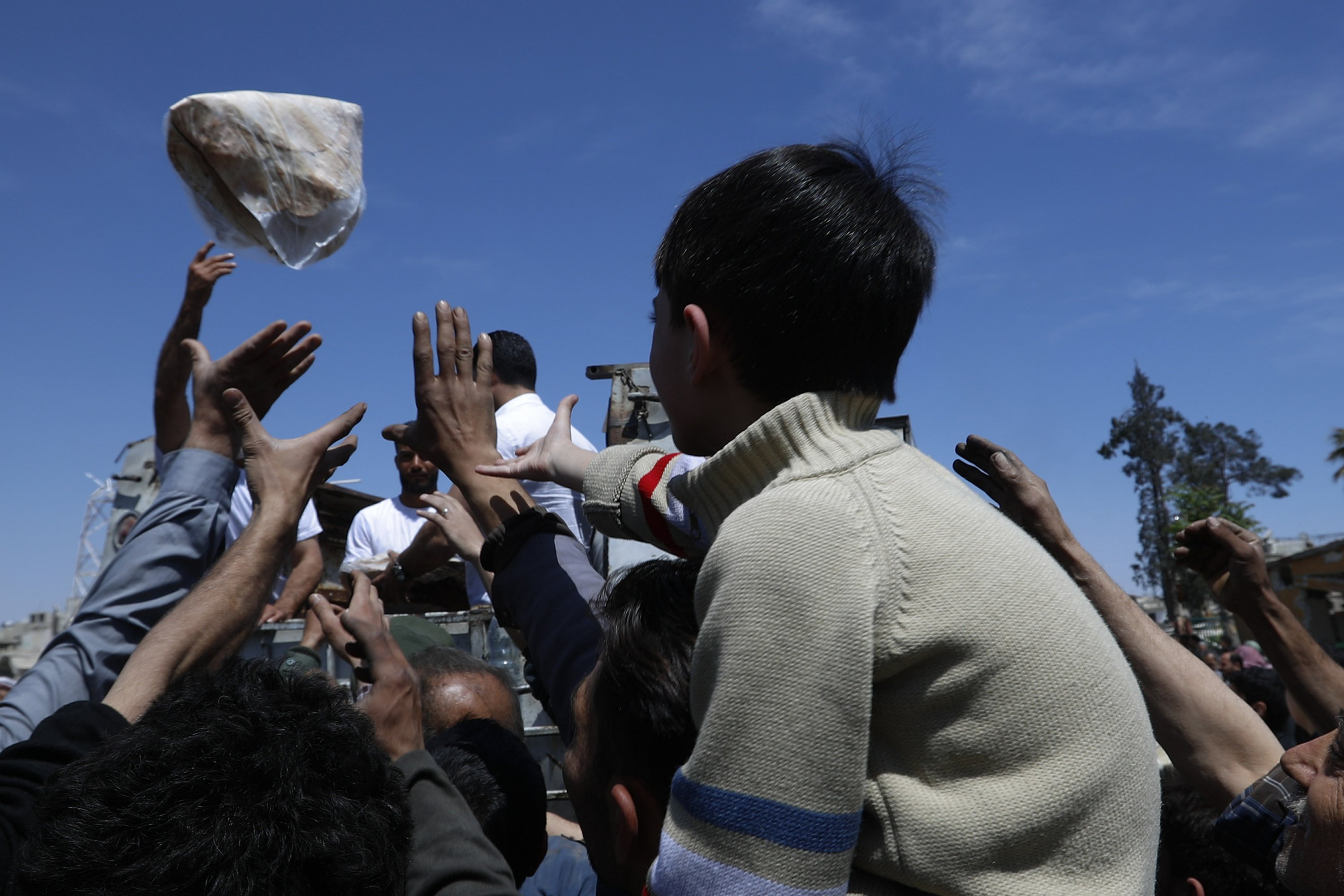 BEIRUT (AP) – Lines stretch for miles outside gas stations in Syrian cities, with an average wait of five hours to fill a tank. In bakeries, people push and shove during long and chaotic waits for their turn to collect the quota of two packs of bread a day per family.

On the streets of Damascus, the capital, beggars approach motorists and passersby asking for food or money. Medicines, baby milk and diapers can hardly be found.

As Syria marks the 10th anniversary on Monday of the start of its uprising turned civil war, President Bashar Assad may still be in power, supported by Russia and Iran. But millions of people are sinking deeper into poverty, and most households can hardly put together enough to secure their next meal.

With Assad preparing to run for a fourth seven-year presidential term in the spring, some have questioned whether he will be able to survive the sharp economic decline and anger in the areas under his control. Poverty levels are worse now than at any other time during the 10 years of conflict.

“Life here is a portrait of everyday humiliation and suffering,” said a woman in Damascus. Her husband lost his job at an electronics store last month, and now the family is taking advantage of the meager savings that are quickly evaporating. The woman said she had started teaching part-time to help make ends meet. Like others, she spoke on the condition that her identity be hidden for fear of arrest.

With two children and an elderly father to care for, she said life had become excruciatingly difficult and anxiety for the future overpowers her. Until recently, he could smuggle his father’s medicine from Lebanon, but now Lebanon has its own crisis and shortage.

“I go to the souk and I really have to think about priorities, buying only the basics for cooking. I try not to look at the other things my kids might like, ”she said.

The decade of war has caused unfathomable destruction in Syria. Almost half a million people have died and more than half of the pre-war population of 23 million has been displaced., whether inside or outside the country’s borders, the worst displacement crisis in the world since World War II. The infrastructure is in shambles.

For most of the conflict, Assad was able to protect Syrians in government-controlled territory from excruciating economic pain. Although only sometimes, the state kept the arrival of fuel, medicine and other supplies and the currency held firm.

Now he has gained a decisive advantage in the war with the help of Russia and Iran, his control over the areas under his control is unquestionable, and the rebellion is largely crushed.

But the economy has collapsed surprisingly quickly. It was hit by a double whammy of powerful new sanctions imposed by the United States last year and the financial collapse in Lebanon, Syria’s main link to the outside world. That proved too much, in addition to the tensions of the war, government corruption, other Western sanctions in place for years, and the coronavirus pandemic.

The United Nations says that more than 80% of Syrians now live in poverty and 60% are at risk of starvation. The currency has plummeted, now at 4,000 Syrian pounds. to the dollar on the black market, compared to 700 a year ago and 47 at the beginning of the conflict in 2011.

“When you put all these things together, it is not surprising that we are seeing an increase in food insecurity, an increase in hunger,” said Arif Hussein, chief economist at the UN World Food Program. “Not just in breadth, that is, many, many people, but also in depth, which means that people are closer to starving today than ever.”

Residents of government-controlled areas who spoke to The Associated Press paint a grim picture. Prices go up several times a day. Families now depend on electronic “smart cards” to secure subsidized and rationed products including fuel, gas canisters, tea, sugar, rice and bread. To pick them up, they wait in long lines, often pushing, shoving, and fighting.

At gas stations, some park their cars overnight to claim a spot in line and return early in the morning to fill up their cars. Residents carpool or walk whenever possible to avoid wasting fuel.

“It is the ‘Republic of Tails,'” said Ibrahim Hamidi, a London-based Syrian journalist who covers Syrian affairs for the Saudi-owned newspaper Asharq Al-Awsat.

Food prices jumped 230% last year, and many Syrians say they are consumed by searching for essential products that are no longer available. Many families go months without meat or fruit. In the vegetable markets, people usually buy only one piece because they cannot pay more. The monthly salary of a state employee is now worth between $ 15 and $ 20, compared to $ 170 a year ago.

In the main cities, many plan their day based on the electricity schedule, since the power is cut four hours for every two that it is on, sometimes more. Unlike Lebanon, where neighborhood generators have been institutionalized, only the well-off can afford them in Syria.

In winter, with a shortage of gas bottles, many turned to the use of old toxic wood heaters to heat themselves, and children were seen rummaging through the trash looking for something to burn.

The simultaneous crises in Lebanon and Syria have fed back. Where the Lebanese once traveled to Damascus to buy cheaper and good-quality medicines, textiles and other goods, now Lebanon’s subsidized goods, including fuel and medicines, are being smuggled into Syria, exacerbating the economic crisis. from Lebanon.

A Syrian media activist calling himself Omar Hariri said rations of bread, gasoline, cooking gas and diesel barely cover 10% of people’s needs. Waiting in line for hours has become “a way of life,” he said.

“I have a relative who got his turn for gasoline in January after two cold months passed and was forced to buy on the black market at a much higher price,” he said.

Syrian economist Samir Seifan said that the collapse of Lebanon’s banking system, US sanctions and the pandemic are all “factors that exploded at the same time.” Now the regime has no more sources of income, so they are printing money and fueling inflation, he said.

Frustration is expressed even among Assad’s most loyal followers. A lawmaker recently questioned why Iran and Russia weren’t helping by shipping oil and wheat.

The government has cracked down and detained at least nine people in the past six weeks, including a prominent state television host for social media posts deemed critical.

“The regime is trying to rebuild the walls of fear, to remind people that even if they are loyal they cannot criticize us,” Hamidi said.

Assad blames the United States and calls its sanctions economic terrorism that seeks to starve people to death. Changing regional dynamics are increasing your confidence; some Persian Gulf countries that supported the Syrian opposition now openly criticize the sanctions.

“In 10 years of war, the (Syrian) regime did not offer a single concession. There is a general feeling that things can only get worse, ”said Hamidi.

Follow AP coverage of the 10th anniversary of the Arab Spring uprisings at https://apnews.com/hub/arab-spring