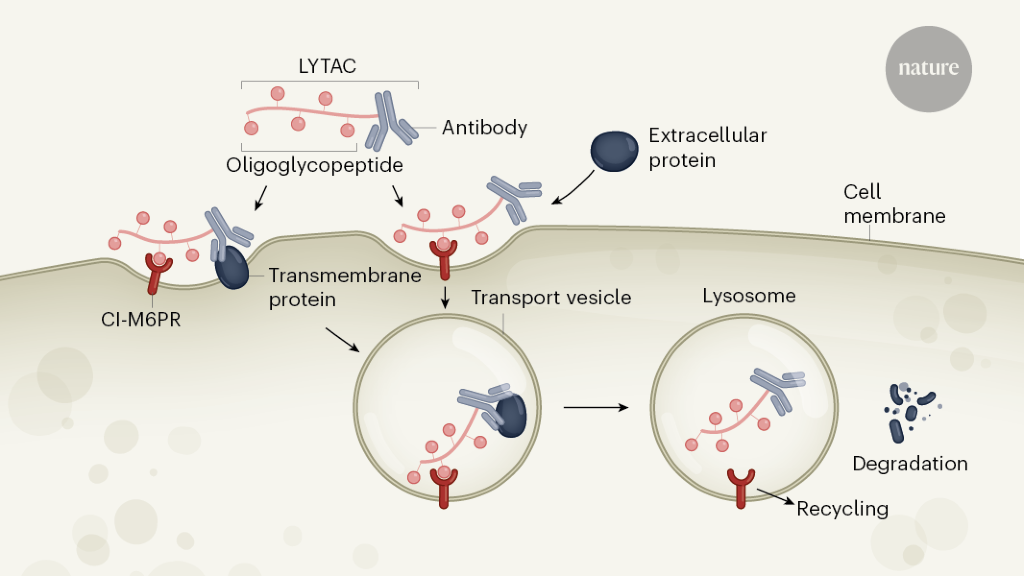 Most drugs act by binding to a specific site in a target protein to block or modulate the protein’s function. However, the activity of many proteins cannot be altered in this way. Instead an emerging class of medicine brings the protein closer to other molecules, which then alters the protein’s function in an unconventional way.1–3. One such approach uses drug molecules called protein degraders, which promotes the tagging of proteins with another small protein, ubiquitin. The tagged proteins are then broken down into small peptide molecules by the cell’s proteasome machinery. But because the ubiquitination-mediated degradation pathway occurs inside the cell, protein degradation primarily attacked intracellular targets. I am writing Nature, Instead and others.4 Now report a different mechanism that opens extracellular and membrane-bound proteins to targeted degradation.

The authors report protein degraders called lysosome-targeting chimeras (LYTACs), which are bivalent (they have two binding regions. Fig. 1). One end carries an oligoglycopeptide group that binds a transmembrane receptor (cation-independent mannose-6-phosphate receptor; CI-M6PR) on the cell surface. At the other end is an antibody or a small molecule that binds the target protein for destruction. These two regions are connected by a chemical linker.

The formation of a trimeric CI-M6PR-LYTAC-target complex on the plasma membrane directs the complex to destruction by a protease enzyme in membrane-attached organisms called lysosomes. LYTACs are conceptually related, but complementary to proteolysis-targeting5 (PROTACs) – Another bivalent class of protein diffusers that primarily target intracellular proteins by recruiting them to E3 ligases (those enzymes that tag proteins with ubiquitin).

Banik and others. Started by creating LYTACs of varying size and linker structure, and which used a small molecule called biotin as a protein-binding component – biotin binds to avidin proteins with exceptionally high affinity. The authors observed that these LYTACs rapidly harbor intracellular lysosomes to an extracellular avidin protein in a manner that requires linkage with CI-M6PR. This protein was also internalized and degraded by lysosomes when the authors replaced biotin with an antibody that recognized apolipoprotein E4 (a protein implicated in neurodegenerative diseases). Therefore, LYTACs can directly reproduce antibodies to extracellular proteins for lysosomal degradation from their normal immune function.

Next, Banik and others. Investigated whether LYTACs could induce the degradation of membrane proteins that are targets for drug discovery. In many cancer cell lines, LYTACs actually induced the internalization and lysosomal degradation of the epidermal growth factor receptor (EGFR) – a membrane protein that drives cell proliferation by activating a signaling pathway. Reduction of EGFR levels by LYTACs in cancer cell lines reduced signal activation of EGFR, whereas EGFRs were blocked by antibodies alone. This result confirms earlier reports5 The advantage of using target degradation in therapeutic applications rather than target blocking.

Similar results were seen with LYTACs for other single-pass transmitters (proteins that span the cell membrane only once), including the programmed death ligand 1 (PD-L1), which can eliminate the immune system from cancer. Helps cells. The next step would be to establish whether LYTACs can induce the degradation of multi-pass proteins that span the membrane multiple times, such as ubiquitous G-protein-coupled receptors and proteins that Crane (ion channels and solutes-carriers) Proteins transport through, for example). If so, it would be interesting to compare the performance of LYTACs with those of PROTACs bound to the extracellular domains of such proteins, which can bind the intracellular domains of these proteins (as demonstrated recently).6 For solute-carrying proteins).

As with any new drug, there is room for improvement. For example, the first PD-L1-targeting LYTACs of Banik and colleagues caused only partial degradation of the protein, which the authors attributed to reduced expression of CI-M6PR in the cell lines used. When the authors created a second type of LYTAC that incorporated a more potent PD-L1 antibody, degradation was increased, albeit in cells that expressed a greater level of CI-M6PR than the original cell lines. This suggests that the low abundance of the lysosome-shuttling receptor hijacked by LYTAC (in this case CI-M6PR) may reduce the effectiveness of these degradations. Similarly, loss of key components of the E3 ligase is a common mechanism by which cells become resistant to PROTACs.7. Other lysosome-shuttling receptors other than CI-M6PR can be used as an alternative by LYTACs should resistance emerge. Degraders targeting cell-type-specific receptors may have improved safety profiles compared with traditional small-molecule therapeutics, which are not always cell-type selective.

What sets PROTACs and LYTACs apart from traditional medicines is their mode of action. For example, after the target protein is destroyed by a PROTAC, PROTAC is released and can induce further cycles of ubiquitin tagging and degradation, thereby acting as catalysts at low concentrations.1,5. Mechanistic studies now warrant to determine whether LYTACs also act catalytically.

Another aspect of the mode of action of both PROTACs and LYTACs is that they bring the two proteins together to form a trimatic complex. A common feature of such processes is the hook effect, which causes the formation of trimers, and thus the associated biological activity decreases at high drug concentrations. This is because dimeric complexes typically form preferentially at high drug concentrations – an undesirable effect that can be eliminated by ensuring that all three components interact in such a way that formation of the trimer is more favorable than dimer formation is1.

Kinetics also matter for protein degraders. For example, stable and long-lived trimetric complexes involved in PROTACs, improve drug potency and selectivity, accelerate target degradation.8. It will be important to understand how the complexes formed by LYTACs can be adapted to improve degradation activity.

PROTAC and LYTACs are larger molecules than conventional drugs. As a result of their size, PROTACs often do not allow well through biological membranes, which may make them less potent drugs than biologically active groups. Size should be less of a problem for LYTACs because they do not need to cross the cell membrane, although they will still have to go through biological barriers to combat diseases of the central nervous system. The development of lysosomal degraders that are smaller and less polar than LYTACs – and therefore more able to pass through the membrane – would be eagerly anticipated. Small ‘glue’ molecules that bind to the E3 ligase can already function similarly to PROTACs9.

Targeted protein degradation is a promising therapeutic strategy, and the first PROTACs are currently in clinical trials10. LYTACs will need to play catch-up, but they have earned their place as tools designed to expand the range of proteins that can be degraded. Their development as a treatment will require an understanding of their behavior in the human body – for example, their pharmacokinetics, toxicity, and how they are metabolized, distributed, and excreted. During drug discovery it can be challenging to optimize the biological behavior of molecules involving large groups, such as antibodies and oligoglycopeptides, but this problem can be overcome by further engineering the structures of these groups.1 1. The new approach to the downfall of Banik and colleagues therefore warrants an all hands-on deck approach.

Scientists working in drug discovery will eagerly await the development of LYTACs and the emergence of other methods for drug-induced degradation of proteins12. Is there no protein beyond the reach of the degraders?