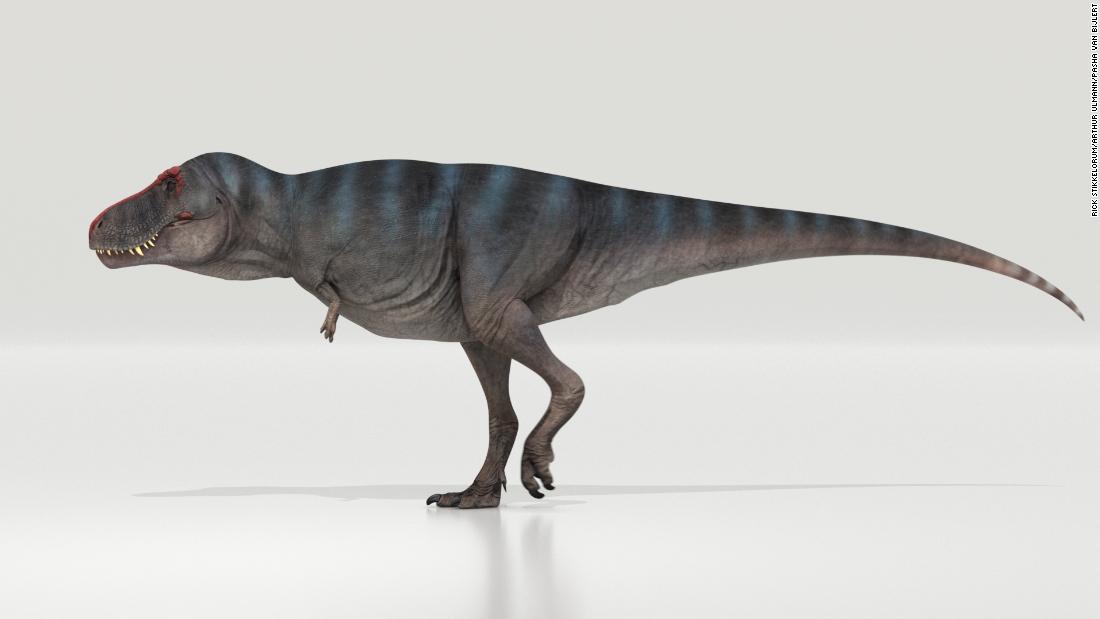 The T. rex would have traveled just under 3 miles in an hour, a speed similar to that of humans and many other animals, at its preferred walking speed, according to new calculations by Dutch paleontologists. However, this pace is slower than other estimates of the tyrant lizard king’s walking speed.

When they have no reason to run, most animals, including humans, have a natural walking speed that minimizes the amount of body energy expended.

Previous estimates had not fully taken into account the role of the T. rex’s tail, which makes up more than half its length, when processing the numbers, said Pasha van Bijlert, leader Author of a new study on T. rex locomotion published in the Royal Society Open Science on Tuesday.

“Animals tend to prefer speeds at which, for a given distance, the energy cost is minimal. They do this by choosing specific step rhythms in which their body parts resonate. Since the entire tail of the T. rex is suspended by ligaments, which behave like elastic bands, we reconstructed this tail to investigate at what pace the T. rex’s tail would resonate, “said van Bijlert, a graduate student in paleobiomechanics. at Vrije Universiteit Amsterdam, by email.

“The whole tail, according to our 1000-pound reconstruction, was really just a mass held up by a rubber band and with each step it bounced slightly up and down. With the right pace you get a lot of movement with very little effort.”

The research team calculated a step rate from a computer model of a T. rex tail, based on Trix, a 12-meter-long (39-foot-long) adult T. rex fossil in the Biodiversity naturalis Center, a natural history museum and research center in the Netherlands. The scientists then multiplied the pace of the stride by the length of the stride found on the fossilized tracks for an estimated baseline walking speed of 2.86 miles per hour.

Other methods, van Bijlert said, focus primarily on calculations based on the legs and hips. They certainly play a crucial role in the estimates, but calculations based only on these parts of the dinosaur’s anatomy can lead to errors. results. That’s because the T. rex and many other dinosaurs had unique tails that are not found with any other living animal today.

Similar to the walking speed of animals today

Understanding how a top predator like T. rex moved can help paleontologists better understand the behavior of dinosaurs and ancient ecosystems, answering questions like: How much food did it need to move that huge body at that speed? How far would it have traveled to find prey?

For example, a T. rex would use its preferred walking speed when walking towards a water feature, van Bijlert said. “It can also give you an idea of ​​what kinds of distances it can travel when looking for food.”

He did not estimate the maximum speed of the T. rex in this investigation, but he plans to do so using the same method in the future.

John Hutchinson, professor of evolutionary biomechanics at the Royal Veterinary College in London, said the role played by tails had been a neglected topic in studies of dinosaur locomotion.

“The speed at which giant tyrannosaurs could have walked normally has not been a big question for many studies, but it is still an interesting question. The approach used here is complementary to more sophisticated muscle-based simulation studies and, in a way, to the fossil footprint data, “he said in an email.

“This study covers new ground in an intelligent way with an original model. It is interesting and it would be useful to integrate and compare it with other approaches in the future.”

What surprised van Bijlert most about the research was that the walking speed of the T. rex the team found was similar to that of a wide range of animals alive today.

“Humans, ostriches, horses, elephants, giraffes, wildebeest and gazelles have a remarkably close distribution in preferred speeds (around 2.2 to 3.1 mph). Therefore, this includes two- and four-legged animals. , and also relatively small and large. animals, “he said by email.

“What’s interesting is that our new method predicts slower walking speeds for T. rex than other methods, but the speed we found is closer to that of many animals living today.”

Sign up here for Wonder Theory, our CNN science newsletter