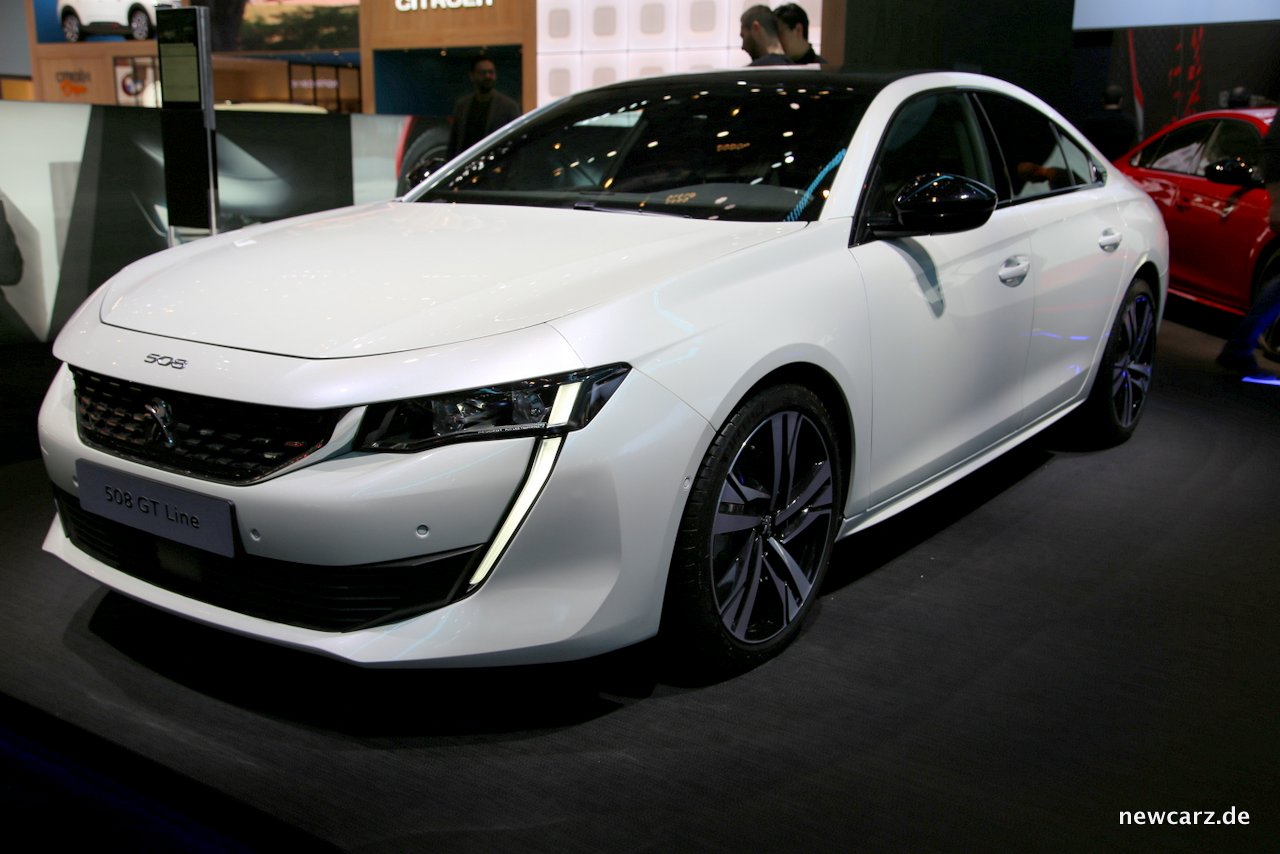 Flanked by a mighty, proud lion sculpture, the new Peugeot 508 is presented to the world public at the Geneva Motor Show. Peugeot celebrates its 1 60th anniversary and stages the new model range, whose spearhead forms the new sedan 508.

As already summarized in the news report,

the French brand reveals its know-how in terms of aesthetics and state-of-the-art technique and gives the promise of an intense driving pleasure.

Sharply and technically contoured, the five-door coupe sedan with Fastback stands in the shadow of the gigantic lion, but steals the sculptural work of art with ease the show.

Inspired by the Concept Car Peugeot Instinct the impressive front fascia looks especially through the unique-striking light signature of the daytime running lights and the full-LED headlights like a statement. The light formation of the Peugeot 508 stands for aesthetics, for style and for the courage to create something unique.

Meanwhile, the rear end is replaced by horizontal and three-dimensional full-LED Rear lights emphasized in a CI-compliant manner. Such an expressive design evokes associations with the mighty fangs of a lion when looking at the front. So one can not help thinking of the rear of waving lion claws, which may have served as inspiration for the taillight design.

frameless doors are the highlight of the sleek and sporty silhouette, their appearance in the open state reminiscent of that of a convertible and captivates design enthusiasts.

Meanwhile, the interior fascinates with a dashboard based on the concept car Peugeot Exalt . Rarely does one see such a gearing and proximity between a concept vehicle and the real production model.

In our seat test in the Peugeot 508 of the stand, especially the i-Cockpit the view. It includes a compact, sportily-marked steering wheel and a large 10-inch HD touch screen with capacitive technology. The system is completed by the seven brilliantly designed toggle switches and a 12.3-inch digital instrument cluster.

Engines and technology of the new Peugeot 508

The engine range initially includes two petrol and three diesel. It is offered for the two petrol engines with 180 hp and 225 hp and for the three diesel engines BlueHDi 130 HP, 160 HP and 180 HP, a eight-speed automatic transmission . The 1.6l PureTech 225 is additionally equipped with a particulate filter, while the 1.5l BlueHDi 130 has a selective catalytic reactor for processing NOx emissions.

As a special technology and security feature, a night vision system is offered. This detects thanks to an infrared camera living beings, who are in front of the vehicle. The novel system covers a range of 200 to 250 meters.

First of all, it is revealed that the Peugeot 508 First Edition is based on the high quality equipment line GT, but offers special features. Its specifics are, for example, the grille with a glossy black border and two-tone 19-inch alloy wheels. The edition model is powered either by the PureTech 225 HP or by the BlueHDi diesel engine with 180 HP the power of which is translated by eight-speed automatic transmission.

The interior boasts decorative elements made of real wood and black Alcantara or leather seats with decorative stitching. Other features of the First Edition are the steering wheel rim made of perforated leather a panoramic sunroof and a black headliner. The offer is completed with a ambient lighting door sills with the inscription "First Edition" and the premium hi-fi audio system from FOCAL.