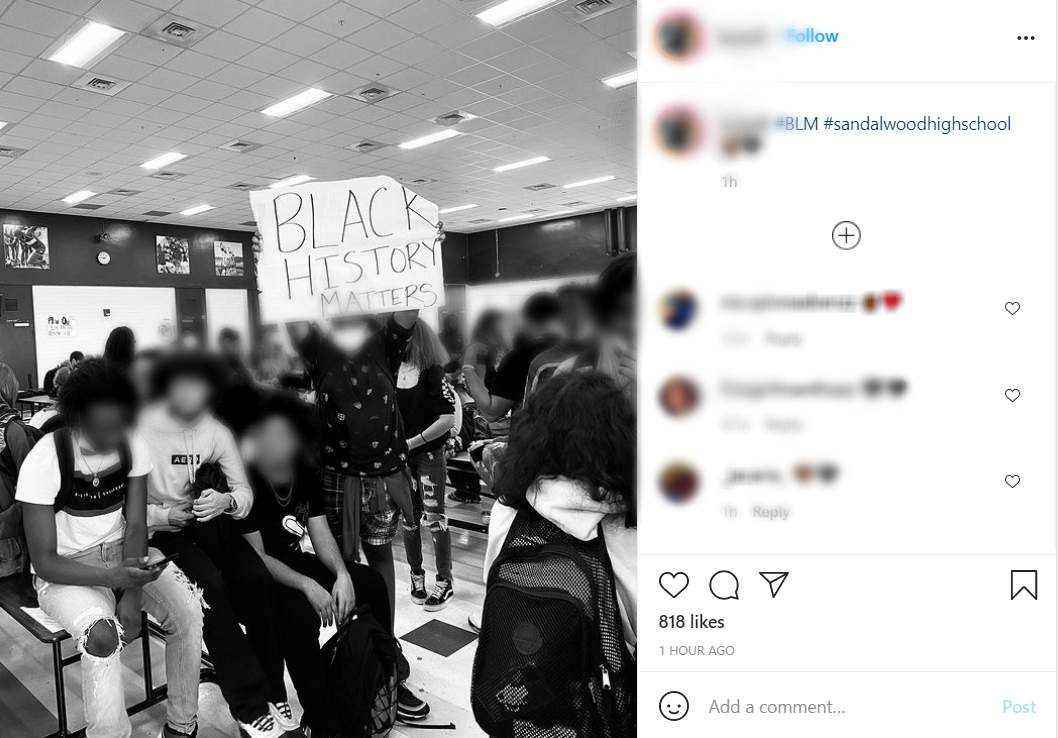 JACKSONVILLE, Fla. – A student demonstration at the largest school in Duval County.

It all started Tuesday with a post in Microsoft Teams from Sandalwood High School Principal Dr. Saryn Hatcher. It was to promote the school district’s mental health awareness campaign this month.

The campaign, “The Month of Your Importance” caused many students to rage thinking that it was a replacement for Black Lives Matter and, by extension, Black History Month which is also in February. DCPS spokeswoman Tracy Pierce said the district recently rebranded the campaign from its original message “#TakeOffTheMask,” after it caused some confusion and inadvertent mixed messages, first reported by the Florida Times-Union.

The students then allegedly posted racially insensitive comments on that Microsoft Teams thread and the principal eventually closed the entire thread.

News4Jax spoke with the organizer and one of the protesters and they explained what caused them to leave class.

“So that’s when I thought, ‘Okay, that’s the last straw. They don’t listen to us, ‘”said student and organizer Jara Enoch. “Our ideas and our concerns are not being expressed because we are currently being silenced. So, I decided to make that post, I said peacefully, everyone can leave at 12:30. And we are going to protest in the cafeteria. “

“We feel like our school has such a low level of respect for us,” said student Jodi Price. “We feel the need to dress in black and walk the hallways singing ‘Black Lives Matter’ because we feel like our voices are not being heard enough due to what is happening today, you know, a lot of violence and stuff.”

Both students said they have meetings scheduled with school administrators on Thursday.

According to district spokeswoman Tracy Pierce, there was no physical violence and no injuries were reported. There was some knocking on tables and standing on tables, but there was no damage to school property, Pierce said.

Additional police officers were called into the school towards the end of the approximately two-hour rally, but they did not participate at all, they were only there to make sure no one entered or left campus without authorization and to make sure the campus was safe, he said. the district.

Sandalwood High School Senior Vice President Kimberly Williams, 17, said that even though the protest didn’t go exactly as planned, there are still issues at the school that need to be addressed.

“Being at Sandalwood for all four years, I witnessed peer racism, racist comments in all my classes, and I personally didn’t really know how to attack it and I feel like I didn’t have a strong enough voice to say something, nobody really did. Williams said. “I feel like we need to have an assembly so that we can talk about it and make it known … instead of pushing and ignoring it.”

Williams and other members of the student government plan to meet with school administrators to try to find the best way forward and have productive discussions.