[Editor’s Note: The following contains spoilers from Seasons 1 and 2 of “Stranger Things.”]

Steve Harrington was never supposed to be the hero or even the good guy on “Stranger Things,” and in fact was written to be the clbadic ‘80s bully. But when Joe Keery was cast, his natural charisma inspired the Duffer Brothers to give him a far meatier story arc. The turning point came at the end of Season 1 after Steve had a falling-out with his girlfriend Nancy (Natalia Dyer) after he slut-shamed her with graffiti all over town. By the big finale, however, he stood shoulder-to-shoulder with her to fight off the Demogorgon with a baseball bat.

Read More:‘Stranger Things’: All the Pop Culture References and Homages, Episode by Episode


This brings us to Season 2, in which Steve goes through a reset of sorts. As a popular senior in high school with a girlfriend, he should be feeling pretty good about himself. But the events from last year with the Demogorgon, the lab, and the unresolved death of Nancy’s friend Barb (Shannon Purser) couldn’t be ignored for long. Add to that his uncertain college future and a drunken Halloween breakup with Nancy, and it’s his own world that is now upside-down.

“In your life sometimes, you feel such a big change coming on and you feel you’re trying to go back to how things were,” Keery said in an interview with IndieWire. “Although it hurts, I think that [Nancy] realizes before Steve does that she can’t go back and she has to pursue this justice [for Barb]. Steve kind of takes it the wrong way and thinks of it as holding her back and feels hurt.”

It’s at this low point when Steve finds someone else, someone new, and no, not another love interest. Instead, he gets thrown together with younger kid Dustin (Gaten Matarazzo), who’s been abandoned by his friends and needs to hunt down his pet Dart, who is a demodog (a Demogorgon that runs around on all fours) that ate his cat. The oddball pairing became one of the best onscreen relationships this season.

Read More:‘Stranger Things 2’: Casting the Kids of Hawkins As Grown-Ups


“The story takes on a life of its own,” Ross Duffer said on an episode of “Beyond Stranger Things.” “We realized that Steve was left alone by Nancy.”

“He had a very depressing storyline,” added Matt Duffer. “We couldn’t just cut to him moping… We thought Dustin could he call on Steve. He’d have to be pretty desperate to make that move.”

“We fell in love with that idea when we came up with it because it would lend to great moments of bonding, especially for two characters who were a little bit heartbroken, so we thought they could help heal each other,” said Ross Duffer.

Despite getting reluctantly roped into monster hunting with a bunch of kids, Steve appears to be well-suited to babysitting and even offers some advice to Dustin about dating and hair care. In looking out for others, he finds a new maturity within himself.

“I have four sisters, three younger sisters so I’ve been an older sibling to people before,” said Keery. “So I kind of had this understanding of why these two characters needed to be together. They both kind of were left in the dust by their friends, and they both kind of were out there. They needed someone, and they kind of found each other. As a kid I always wanted a little brother, and I kind of got to with [Gaten]. You learn acting with people who are a lot younger than you, like spontaneity and relaxation.”

Besides modeling big brother behavior, Steve also steps up and becomes an action hero equipped with his nail-studded baseball bat. (Technically, Nancy owns the bat, Jonathan hammered in the nails, but really, Steve knows how to use it.) While a group of them are hunkered down in the junkyard, he leaves the relative safety of their fortified school bus in order to draw out Dart and take him down. Unfortunately, multiple demodogs show up instead. Although Season 1’s Demogorgon was a man in a monster suit enhanced with CGI, this season, the demodogs were entirely created with visual effects.
Read More:‘Stranger Things 2’ Reinforced a Sexist and Ubiquitous Trope, But Season 3 Could Fix That


“It’s a real live set that was in this junkyard. It’s a rough sort of thing to do because you’re diving in this bus 30 times,” Keery said. “I actually I landed on my back so I kind of screwed up my back a little bit. But the stomping on the ceiling was just some dude in really heavy boots and then they added the special effects.

“[Fighting the demodogs] was the hardest part. There was nothing there,” he added. “So all the stuff where I’m rolling over the car and hitting the thing, making sure you’re really going through it and knowing exactly where everything is, it’s kind of a challenge. The only thing that was actually practical was when the arm reaches in. It was just a metal rod. We actually had these resin bats, and I just snapped the bat right in half and almost hit Sadie [Sink].”

After facing carnivorous beasts from another realm, taking on a mullet-wearing bully, and helping to save the lives of four 13-year-olds, Steve’s confidence has been restored, but that doesn’t necessarily mean he can get back together with Nancy. Not only did she begin a relationship with Jonathan Byers (Charlie Heaton) – he fought for justice with her – but Steve’s newfound maturity has brought him some insight.

“By the end of Season 2, he realizes that in order for his evolution as a person to sort of continue, [breaking up] maybe was something that he needed to happen,” said Keery. “It’s not something that he necessarily has settled feelings about or isn’t sad about still, but I think he’s kind of comes to terms with the fact that maybe they weren’t right for each other at that time. But I don’t think that he has given up.” 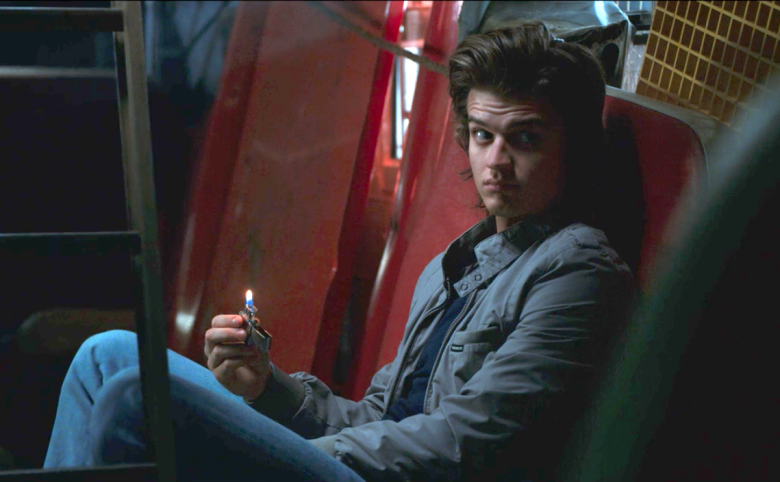 Sign Up:Stay on top of the latest TV news! Sign up for our TV email newsletter here.