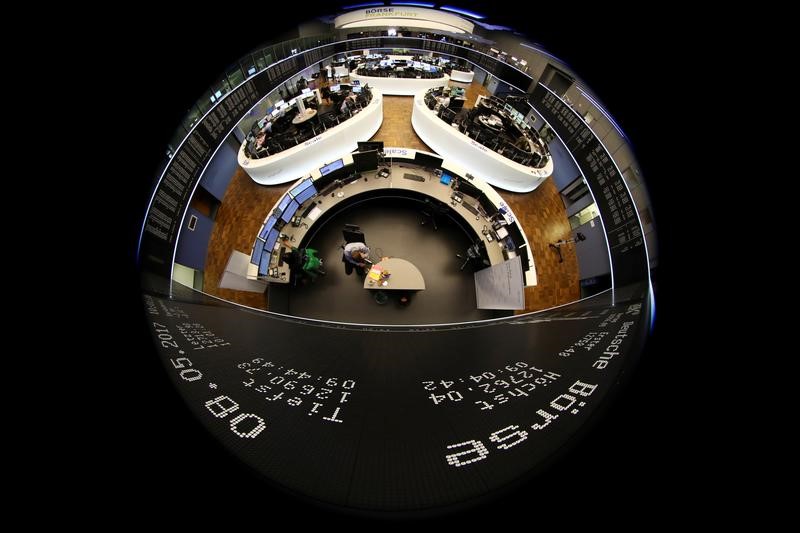 © Reuters. Traders work in front of the German share price index, DAX board, at the stock exchange in Frankfurt

LONDON (Reuters) – World stock markets notched up a fresh record high on Wednesday, powered by a 3 percent jump in basic resources shares after oil prices hit their highest since mid-2015 and by robust earnings from companies such as Sony.

The latest gains came ahead of a U.S. Federal Reserve meeting, which is expected to signal a third rise in borrowing costs before the end of the year, and of a further flurry of earnings results that include Facebook (NASDAQ:).

The pan-European STOXX 600 index () hit its highest level since August 2015. Some of that was down to Germany’s DAX () index which, playing catch-up after Tuesday’s holiday, jumped 1.7 percent to hit a fresh high.

Stock markets in London () and Paris () climbed 0.2-0.4 percent on the day, and U.S. stock market futures () pointed to another strong session for Wall Street.

Shares of Japanese multinational Sony (T:) soared as much as 12.3 percent to a nine-year high after the electronics and entertainment firm forecast its best ever annual profit.

As of Tuesday’s close, 45 percent of MSCI Europe companies had reported results for the third quarter, of which 66 percent either beat or met expectations, according to Thomson Reuters I/B/E/S data.

The combination of robust economic and corporate earnings growth from the third quarter is giving the long-running bull market a new lease of life.

“While earnings are good, inflation and bond yields are relatively low, why would you take your money out of stocks?” said Michael Hewson, chief market badyst at CMC Markets.

Oil rose to its highest since mid-2015 as data showed OPEC has significantly improved compliance with its pledged supply cuts, and Russia is also widely expected to keep to the deal.

The Fed concludes a meeting later on Wednesday. It is widely expected to leave interest rates unchanged but to raise them in December. However, expectations for further Fed rate hikes beyond December have been dampened by benign inflation.

Wednesday’s rate decision comes just before an expected announcement of the next head of the central bank. The White House has said U.S. President Donald Trump will announce his Fed pick on Thursday.

Trump is expected to pick Fed Governor Jerome Powell, who is considered more dovish on interest rates than some other candidates and thus relatively stock-market friendly, sources have told Reuters.

“Apart from the earnings side, another reason for the buoyancy in markets is still the huge amount, approaching $15 trillion, of liquidity that’s being pushed into the system by big central banks,” said Hermes chief economist Neil Williams.

U.S. private employers hired 235,000 workers in October, the most since March, the ADP National Employment Report showed on Wednesday.

The European Central Bank last week extended its badet-purchase scheme well into 2018, albeit at a lower amount, and while the Bank of England is expected to lift rates on Thursday there are doubts over whether that will mark the start of a tightening cycle in Britain.

The dollar’s index against a basket of six major currencies was a touch firmer at 94.65, but down from last week’s three-month peak of 95.15 ().