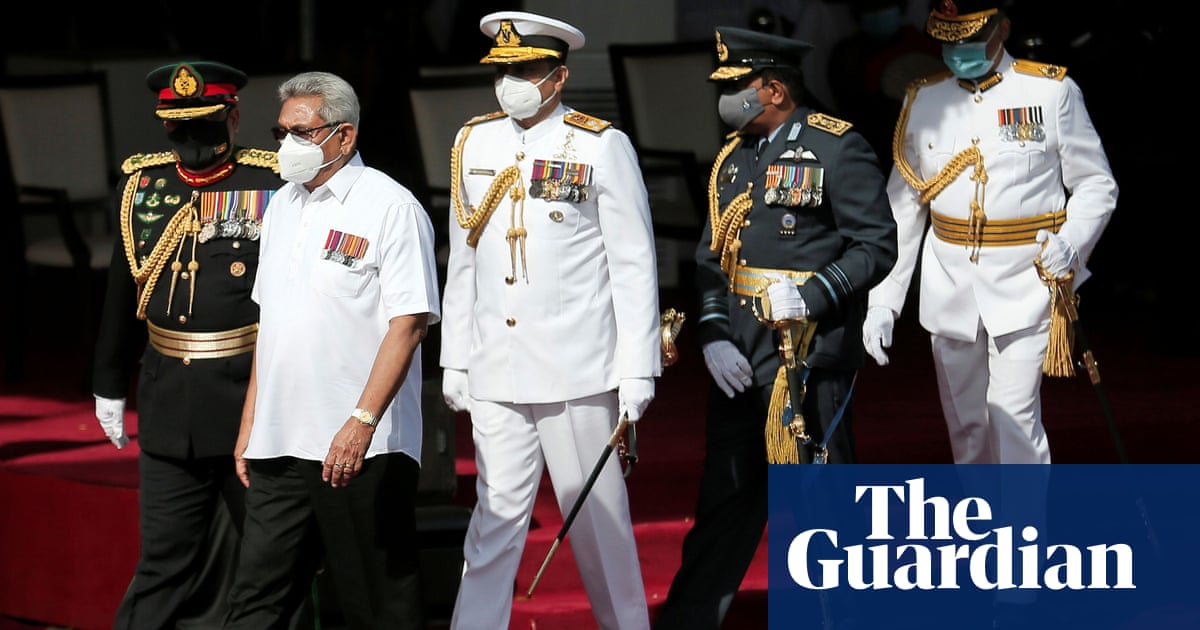 In a speech to the human rights council on Wednesday, Michelle Bachelet is expected to issue a stern warning that the Sri Lankan government has “closed the door” to end impunity for past abuses and faces a return to state repression of civil society and militarization of public institutions.

In January, the UN High Commissioner for Human Rights voiced alarm at “worrying trends” in the country since President Gotabaya Rajapaksa took office in 2019.

In a damning report released last month, which will be formally presented to the council, Bachelet documented the deepening of impunity and obstruction of justice for atrocities committed during the brutal civil war of 1983-2009.

In the report, Bachelet said: “Sri Lanka’s current track record sets the stage for the recurrence of policies and practices that led to serious human rights violations.”

Since 2020, former army officer Rajapaksa has appointed at least 28 former military and intelligence personnel on duty or on duty to key positions, according to her report. Some are senior officials implicated in alleged war crimes and crimes against humanity during the last years of the civil war, including Army Chief Shavendra Silva and Defense Secretary Kamal Gunaratne.

Rajapaksa, who was Secretary of Defense when his brother Mahinda was president from 2005 to 2015, oversaw the defeat of the Tamil Tigers in 2009. During this period, illegal killings and enforced disappearances were widespread. It has been estimated that around 40,000 Tamils ​​died.

The previous government had taken some steps towards liability and war crimes courts, but these were stopped after Rajapaksa was elected in 2019. Last year, the government said it would no longer honor its commitments to a consensus agreed in 2015 to guarantee truth, justice and reparation. and an accountability mechanism for past abuses.

Failure to deal with the atrocities of the past continues to have “devastating effects on tens of thousands of family members in all communities,” who persist in seeking justice, reparation and the truth about the fate of their loved ones, Bachelet said.

Several UN officials and independent experts, including four former high commissioners, signed a letter describing the Bachelet report as a “compelling case” for decisive international action and praising its focus on prevention.

They wrote: “In 2009, the international community failed Sri Lanka. We must not fail again. “

Bachelet’s report documents a pattern of surveillance and harassment of civil society organizations and human rights defenders, echoed by activists speaking to The Guardian. One said that the human rights situation and the rule of law were worsening “daily”.

Dharisha Bastians, a Sri Lankan journalist who wrote for the New York Times before being forced into exile for harassment and threats shortly after the 2019 elections, said she hoped UN member states would heed Bachelet’s call.

“None of us expected this repression to happen so quickly,” Bastians said. “It’s very disturbing, and sadly, it’s a pattern we’ve seen before. Sri Lanka is at a turning point.

“It is clear that this government has no interest in promoting the cause of justice. On the contrary, this government has done everything possible to obstruct justice. The president has created a political victimization commission that has exonerated all the military accused of human rights violations, without even listening to the victims or learning about the investigations.

This was a “tragedy” for the families of the disappeared, he said, and urged the international community to act. “The continued focus on impunity for attacks against journalists will help keep my colleagues safer on the ground in Sri Lanka. The spotlight would send a message to the Sri Lankan government that the world will not look away. “

Activists and activists said that the intimidation and harassment of civil society in Sri Lanka had reduced civilian space and had a “chilling effect”.

Shreen Saroor, a rights activist working with women’s groups in northern and eastern Sri Lanka, said the groups were forced to reveal information, including staff addresses and phone numbers, and were asked for bank information. to verify funding sources.

“They want all charities and NGOs to register with the national secretariat for non-governmental organizations, which reports to the secretary of defense,” Saroor said.

The Secretary of Defense is Gunaratne, who was a unit commander at the end of the war and is accused of war crimes.

“They are forcing us not to accept foreign funds, unless we register with the defense secretary and we need the approval of the defense ministry for the work we do,” Saroor said. He has been told that his work with communities affected by the war is now “illegitimate”.

Melissa Dring, campaign manager for the UK-based Sri Lanka Campaign for Peace and Justice, said the human rights situation on the ground “is getting worse daily.”

Time was running out for victims and survivors, he said. Since the start of protests on the roads of the families of the disappeared, 78 people have died, he said.

“The resistance and determination of these protesters, the majority of whom are women, who have continued their protests for years and who have often been intimidated and harassed by the security forces and other state officials, is astonishing.” , He said.

Meenakshi Ganguly, director of Human Rights Watch in South Asia, said: “If, now, the international community does not act, starting with a firm resolution in the UN human rights council, there is a good chance that it will be repeated, including an increase in attacks against activists, critics, families of victims and minority communities. “

Amnesty International said in a recent report that it had witnessed an “alarming crackdown” on civic space and attacks against minorities, including Muslim communities, who make up 10% of Sri Lanka’s population.

Earlier this month, a group of Muslim families filed a complaint with the UN human rights committee about Sri Lanka’s policy of forcible cremation of all those confirmed or suspected of having died with Covid-19, saying it violates their religious rights and is causing “untold misery.”