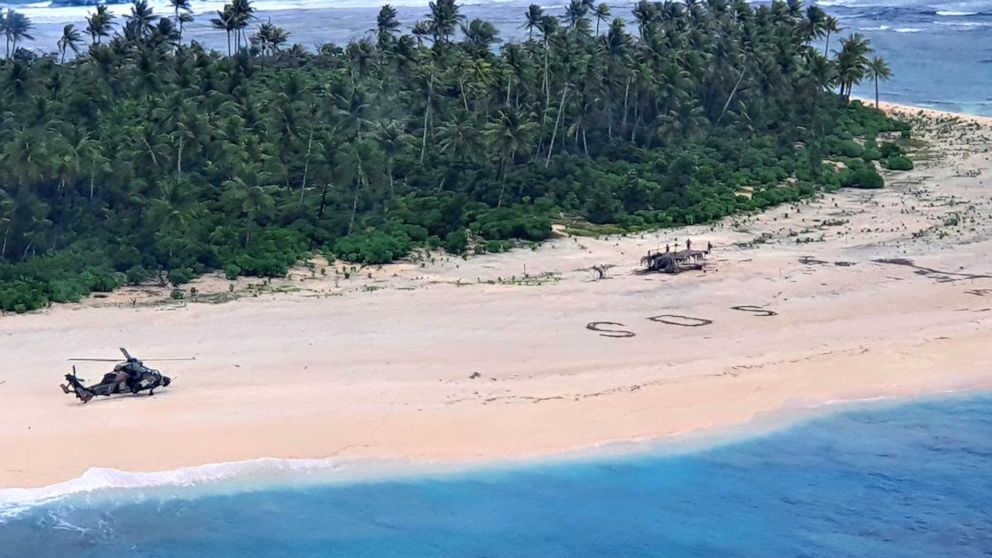 They were missing for about three days.

LONDON – Authorities said three people have been rescued from a remote, uninhabited island in the Micronesia archipelago after writing “SOS” in the sand.

The eponymous sailors had been missing in the western Pacific Ocean for nearly three days, when their huge message was spotted on Sunday by explorers in Australian and American aircraft on the small Pichelot Island beach. According to a press release from the Australian Government Department of Defense, the three men were found to be in “good condition”.

The men intended to travel to Pulup Atoll, about 26 miles, on a 23-foot skiff from Pulav Atoll on July 30, but they of course left and ran out of fuel.

Search and rescue teams from US territory Guam had sought help from the Australian Defense Force on Saturday afternoon. According to Australia’s Department of Defense, the Royal Australian Navy ship HMAS was sailing in the Canberra region and agreed to a course change from American explorers to join Guam.

“The ship’s company responded to the call and quickly prepared the ship for search and rescue,” Capt. Terry Morrison, Canberra’s commanding officer, said in a statement on Monday. “In particular, our number was an MRH 90 helicopter from Number 808 Squadron and four armed reconnaissance helicopters from the First Aviation Regiment, which were instrumental in the morning search to help men find and deliver supplies and to confirm their welfare . “

The missing men eventually located 118 miles west of where they began their journey.

An Australian military helicopter managed to land on Pichelot Island to deliver food and water to the men, confirming their identity and checking that they had no major injuries. According to Australia’s Department of Defense, a Micronesian patrol vessel has been sent to the island to take them.

“I am proud of the response and professionalism of everyone on board as we fulfill our obligation to contribute to the protection of life at sea wherever we are in the world,” said Morrison.