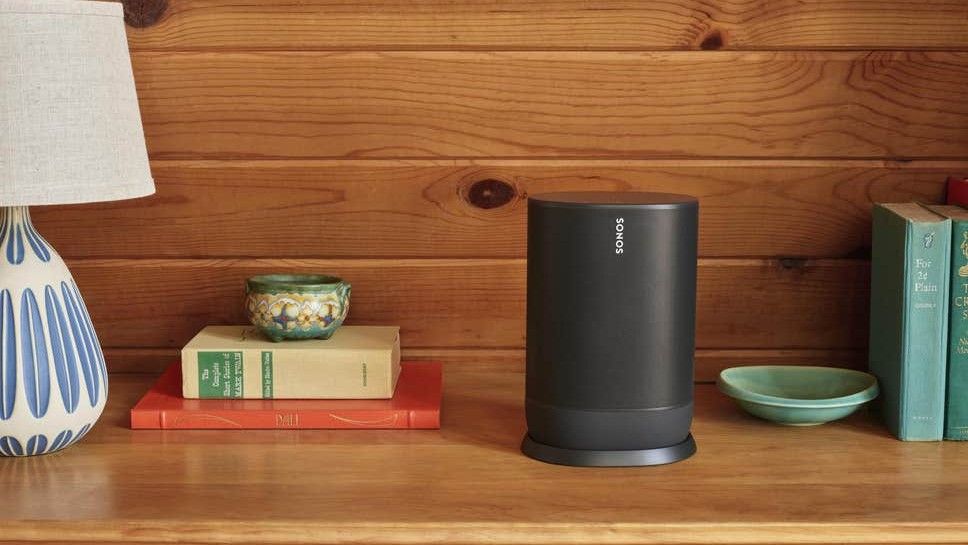 Sonos is reportedly about to launch a new portable Bluetooth speaker. Apparently called the Sonos Roam, the upcoming device has been the subject of rumors ever since an FCC (Federal Communications Commission) filing emerged that described a device that uses a wireless charging dock, but requires less power than the company’s Move speaker. .

Like the Sonos Move, the new speaker is said to come with Wi-Fi and Bluetooth connectivity, suggesting that it will also integrate into the brand’s existing multi-room audio system, as well as being able to play your songs on the go.

Based on the rumors we’ve heard so far, it seems like there will be a lot of similarities between the new speaker and the Sonos Move, which we’ve crowned the best Bluetooth speaker you can buy for two years in a row.

However, a few key differences mean that the Sonos Roam could be a more accessible entry point to the Sonos ecosystem, given rumors of a compact design and low price.

While it’s important to note that Sonos has yet to confirm the existence of the Sonos Roam, everything points to a new speaker launching on March 9, and in anticipation of that announcement, we’ve used all the rumors and leaks we’ve seen. so far to compare the rumored speaker to the Sonos Move, giving you an idea of ​​what to expect if the Roam goes public officially.

The Sonos Roam is rumored to launch on April 20, 2021, although we look forward to hearing more about it at the company’s next event on March 9. Based on the leaks we’ve seen so far, it’ll cost $ 169 (about £ 120 / AU $ 220), making it the cheapest Sonos speaker to date, though it’s by no means a low price for a portable speaker.

The Sonos Move launched in September 2019 and is much more expensive at $ 399 / £ 399 / AU $ 649. Again, that’s expensive for a portable speaker, but this isn’t your average Bluetooth boombox, making it difficult to place it next to any direct competition. Few portable speakers, even those with built-in smart assistants, have as rich a list of features as the Sonos Move, so the higher price is more easily justified.

If rumors are to be believed, the Sonos Roam will be like a smaller version of the Move with similar features, so its own relatively high price tag may also be well justified.

The Sonos Roam is said to be a smaller, cheaper version of the Sonos Move, although if recently leaked photos are anything to go by, it looks quite different from its predecessor.

First of all, it will come with a longer, more cylindrical build than the Sonos Move, a bit like the Ultimate Ears Boom 2. It is unclear if the Sonos Roam will come with a wraparound grille like the Boom 2, but it is possible to judge from the images. filtered.

On top of the rumored speaker there appears to be a control panel with buttons for adjusting the playback of your music, which appears to be made of a rubberized material. Although it’s hard to say for sure from the photos alone, this could be another indication that the speaker will come with waterproofing, a feature confirmed by the report on The Verge.

You’ll also find the Sonos Move controls on the top of the speaker, and it also comes with waterproofing; The original Sonos Move is IP56 rated, which means it can withstand a layer of sand or dust, as well as being dropped into a swimming pool. Whether Sonos updates the higher-rated Roam remains to be seen, but it could turn the rumored speaker into a serious competitor to waterproof speakers like the UE Wonderboom 2 and JBL Flip 5.

As we mentioned, the Sonos Roam is set to be much smaller and lighter than the Sonos Move. According to The Verge report, the Sonos Roam measures 6.5 x 2.5 x 2.5 inches and weighs around 1 pound / 0.45 kg, with a slight resemblance to a stage monitor speaker thanks to its rounded triangular shape.

For comparison, the Sonos Move weighs close to 3kg / 6.6lb, and while the current Move speaker can be lifted with ease, you don’t want to carry it around for long.

Like all Sonos products, the new Roam is rumored to come in black and white color options.

We don’t know much about the kind of audio specs the Sonos Roam will come with, but we can risk taking some guesswork based on the leaked images and the FCC filing.

If the Sonos Roam has a wraparound grille, for example, you could reasonably expect it to distribute the sound 360 degrees, which is ideal for an outdoor speaker that could be used for summer parties or around campfires.

As a smaller version of the Sonos Move, we would expect Roam to include smaller controllers as well. Inside the Sonos Move are large driver magnets, making it quite heavy for a portable speaker, although we found that it’s a fair trade-off with the audio quality you’re getting.

The Sonos Move doesn’t sound like your average portable speaker. If you’re familiar with the Sonos home range, you fall somewhere between the Sonos One and Play: 5, not just in terms of volume, but fidelity as well. The midrange driver delivers punchy, space-filling bass, even when competing with the acoustics of an open space, while there is no decrease in vocal clarity that can often occur with smaller portable speakers.

We hope the brand continues to live up to its reputation for great audio with Sonos Roam, although we’ll have to wait until we get our hands on it to find out.

The test diagrams within the FCC filing show that the Sonos Roam will be accompanied by a wireless charging dock and will offer Wi-Fi 5 (802.11ac) connectivity. That means it will be the first Sonos speaker to support Wi-Fi 5.

It will also come with Bluetooth connectivity like the Sonos Move, although we expect the brand to update it to the latest wireless streaming standard, as opposed to the Move’s rather outdated Bluetooth 4.2.

Wi-Fi support means that the Sonos Roam should be able to be part of a multi-room audio setup, like the Sonos Move.

Sonos Move works with all types of audio sources connected, online, or stored on a local network. If you want to start a playlist on Spotify using Spotify Connect, that’s as simple in the app as playing something you’ve copied to a network storage device. Just launch the Sonos app, and once it’s set up and connected to the internet, all your sources will appear over Wi-Fi.

The Sonos Move also comes with a variety of top-mounted microphones that give you access to a choice of Amazon Alexa or Google Assistant voice assistants – each AI assistant is fully compatible with Sonos Move, giving you the choice. which one you want Use to set reminders, control smart home devices, access calendar, and act like a jukebox with voice.

We hope the Sonos Roam comes with all this smarts too, as well as the Google Assistant / Alexa integration, which would allow it to double as a smart speaker and control your other smart home devices.

That battery life matches the Sonos Move, and while we’d love to see an update for the newer speaker, 10 hours of playtime is certainly respectable compared to other Bluetooth speakers on the market.

Rather than an upgrade to the Sonos Move, it looks like the Sonos Roam will be something of a little brother to the brand’s first portable speaker, taking some of its best features and shrinking them to an easier-to-carry size.

That’s not a bad thing though: Apple had huge success with the HomePod mini, a smaller, cheaper version of the original HomePod smart speaker.

Price is the important factor here; If Sonos can make a more affordable entry point to your multi-room audio system, it could win over many fans who may have previously searched for cheaper Bluetooth speaker brands like JBL and Urbanears.

There’s no question that Sonos already has a great reputation when it comes to the audio performance of its existing wireless speakers and soundbars, and we expect more of the same from the rumored Sonos Roam.

If the company can still deliver an exceptional audio experience and unbeatable connectivity from a cheaper, tougher, and more portable speaker, the Sonos Roam could comfortably pass the crown as the best Bluetooth speaker in 2021. Launches March 9 .