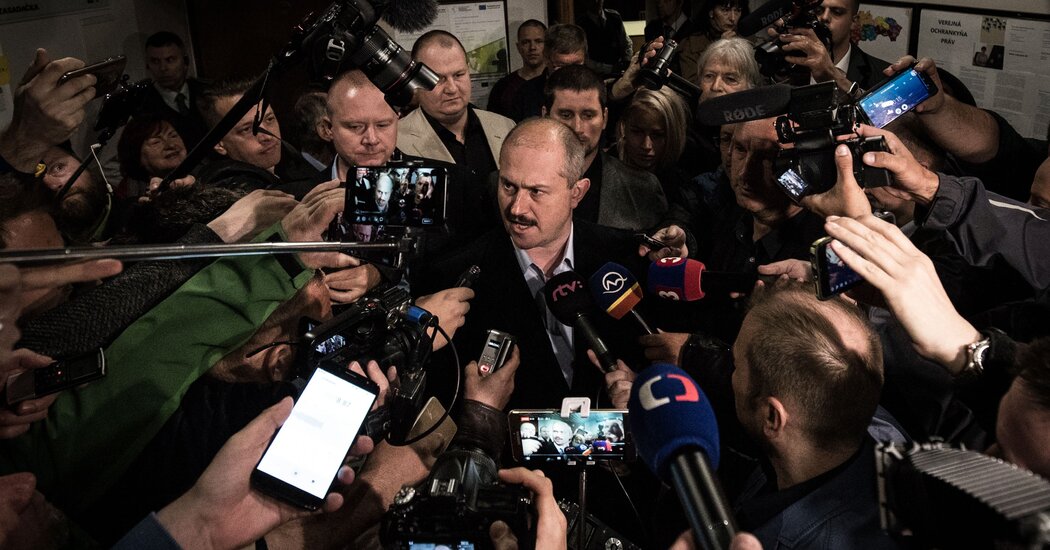 BRATISLAVA, Slovakia – A Slovakian court has sentenced the country’s leading neo-fascist politician to more than four years in prison after using a famous neo-Nazi symbol.

The politician, Marion Kotleba, head of the extremist People’s Party Our Slovakia, was convicted of establishing, supporting and promoting a movement and ideology aimed at suppressing civil rights and democratic freedom. His sentence on Monday was the culmination of a high-profile trial that lasted several months.

“This is evidence of change,” said Grigorij Mesnikov, a political scientist at the Institute of Public Affairs in Bratislava. “What this means for the country is that legal tools are finally working against those who undermine democracy.”

Mr. Kotleba’s sentence was a setback for the country’s far-right movement, which gained popularity in 2015 at the height of the migration crisis. Mr Koteleba’s party, which opposes Slovakia’s membership in the European Union and NATO, entered parliament. 2016

But in February 2018, the murder of a young investigative journalist and her fiancé led to the biggest protest since the 1989 Velvet Revolution, leading to the collapse of the long-ruling party and paving the way for a new, conservative government coalition. The current government has presided over more effective enforcement of laws to fight extremism and corruption.

Mr Koteleba’s party lent support in the election held in February, garnering about 8 percent of the vote and winning the remaining part of the opposition in Parliament.

Mr Kotleba appeared in commemoration of the uniform worn in the wartime Slovak state, run by the Nazi puppet regime led by former Roman Catholic clergy Joseph Tiso. But as soon as Mr. Kotleba’s party came into the mainstream, he shifted his attacks from Jews to migrants and the country’s Roma minority.

The case against Mr Koteleba focused on the disbursement of three checks worth 1,488 euros to needy families at a public event in 2017. Prosecutor Tomas Hones argued in court that the amount of each check – 1,488 – was a clear reference to the Navi-Nazi ideology.

According to prosecutors and expert witnesses, the number 14 “14 words,” was a popular white supremacist slogan. He stated that the number 88 Nazi salute was an illusion for “Heil Hitler”, with each word beginning with the eighth letter in the English alphabet.

The special court sentenced Mr Kotleba to four years and four months in prison for organized crime in the town of Pezhinok. He has said that he will appeal the verdict in the Supreme Court and he will remain in Parliament until the appeals process is completed.

But if his sentence is upheld, he may never run for election again and he will be the first member of parliament to go to prison after Slovakia became independent in 1993.

Judge Ruzena Sabova stated in her ruling, “The words have no meaning,” saying that the numbers were only meant in the context that they are signs of extremism.

In an eight-hour speech on Monday, Mr Kotleba argued that the number coincidence and tests were inappropriate. In an attempt to kick the proceedings out, he performed several stunts.

They included reading long lists of price or contracts with equal amounts and commenting on all testimony.

“The incident was not neo-Nazi,” Mr. Kotlaba said during the trial. “The event had a beautiful, Christian and national character, and I handed out charity checks to three families.”

Losing patience with theatricality in court, Judge Sabova fined him € 500, or $ 590, for disrespecting the court.

The prosecutor, Mr. Honz, told reporters that the court’s decision was a victory in the fight against extremism in Slovakia.

“It is a message to all Slovakia’s democracies that courts and prosecutions will stand up for those who are victims of extremism, violence, racial hatred, fascism or neo-Nazism,” he said.

Rights organizations and many politicians in Slovakia also welcomed the decision.

“No democracy is immune to the threat of extremism,” a group of local anti-extremism organizations said in a joint statement released on Monday. “We are happy that extremism in Slovakia is finally being punished and addressed with due attention.”

Slovak government representative for Roma communities Andrea Bakova, often targeted by Mr Koteleba’s party, said the decision was “the only possible appropriate decision.” “It is also a satisfaction for all those who are trying to convert Marian Kotleba from their hateful rhetoric and antics into second class citizens,” she said on Facebook. “Fascism has no place in our society.”