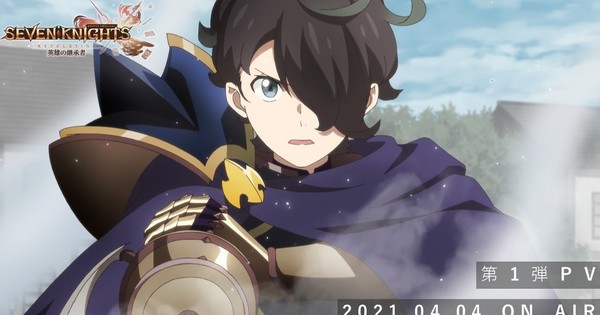 Animation Tohoit’s official Youtube channel began broadcasting a promotional video on Sunday for The Revolution of the Seven Knights: Eiyū no Keishōsha (The Hero’s Successor), the television anime by Netmarble‘s Seven knights RPG for smartphones. The video features the opening theme song “Freeze” by flumpool.

The anime will premiere on Tokyo MX, BS11and Kyoto TV on April 4 at 12:00 am (effectively April 5). The series will then air on Sun TV.

The anime will star:

The cast also includes: (Romanizations of names are not confirmed)

In anime history, there were once many heroes who saved the world from Destruction. Since then time has passed, and the young men and women who have the title of “Successors” awaken powers from the heroes of yesteryear and are entrusted with the fate of the world. The “Seven Knights” are a group of superior successors. Among the Seven Knights there is a young woman named Faria, who fights against the troops of Destruction. In the middle of this battle, save a young man named Nemo. Nemo then awakens the power of a Successor, but no one knows of the hero whose powers he has inherited.

The game was released for iOS and Android devices in Japan in 2016. Netmarble has also released the smartphone game in English. The company describes the story:

The day the sun refused to rise
The God of Destruction divided his power into twelve parts.
and distributed it to twelve elected leaders on earth.
Among them, Seven were chosen in the land of Asgard.
Their mortal powers threatened each other, and war seemed inevitable.
The goddess Ellena took pity on the world and decided to end the war by selecting a child that she considered worthy, granting him her own hidden powers deep within her consciousness to prevent misuse.
After learning of his adoptive past, Evan, the son of a general, embarks on an adventure to search for his real parents, along with a necklace given to him by his biological parents as the only clue.
During his adventure, Evan came across a city after it was ravaged by the Goblins. and rescued a girl named Karin from danger.
After losing her parents to the Goblin raids, Karin decides to leave her city to begin her own adventure alongside Evan.