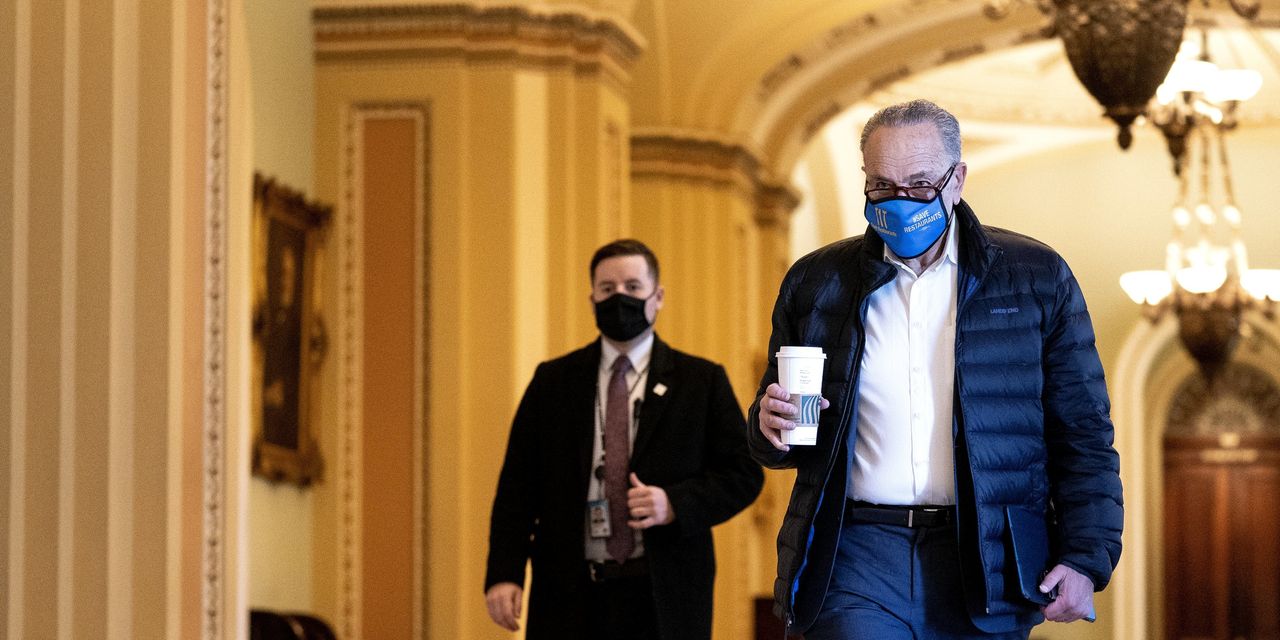 Republicans can’t stop Democrats from passing the legislation, but they plan to lengthen the timeline. Senator Ron Johnson (R., Wis.) Forced Senate staff to read the 628-page bill aloud, which is expected to take several hours. After the reading, the Senate will hold hours of debate and a series of voting on amendments known as “vote-a-rama.”

Senate Majority Leader Chuck Schumer (D., NY) said the Senate would complete the legislation this week “no matter how long it takes.”

All 50 Democrats stood together in the procedural vote, confirming that the party has rallied around the broad aid package, while all 50 Republicans opposed. Vice President Kamala Harris broke the tie in favor of the Democrats.

The legislation would send a direct check for $ 1,400 to many Americans, provide $ 350 billion to state and local governments, fund vaccine distribution, and expand the child tax credit, among other measures.

Democrats are using a legislative procedure called reconciliation that allows them to pass legislation with a simple majority in the Senate, with the goal of passing legislation before forms of federal unemployment assistance expire on March 14. Reconciliation also creates the time-consuming amendment process that could push the bill through the weekend.

While the House passed the bill last week, Democrats in the Senate are making a number of changes to it. After it is approved by the Senate, the House must pass the updated version of the bill before President Biden signs it.

Senators cut the pool of Americans who will receive direct payments following a push from a group of centrist Democrats. People earning less than $ 75,000 and married couples earning less than $ 150,000 will continue to receive the full payment of $ 1,400, but the payment amount will decrease more quickly for people with higher incomes. The payout will hit zero for individuals earning $ 80,000 and couples earning $ 160,000, a drop from previous limits of $ 100,000 for individuals and $ 200,000 for couples.

Senate Democrats added a provision that would make much of student loan forgiveness tax-free, creating an exception from 2021 to 2025 to the normal rule that canceled debt is income.

Democrats in the Senate will remove a measure that increases the minimum wage to $ 15 an hour by 2025 that was in legislation passed by the House. Senate rules limit the provisions lawmakers can pass through reconciliation, and the independent House MP found that the minimum wage increase could not be included in the aid bill.

Other measures in the bill that some Democrats had tried to change, including a weekly unemployment assistance supplement of $ 400, are expected to remain the same as in House legislation.

Republicans have largely lined up to oppose the legislation, attacking many of its measures, including aid to state and local governments, as wasteful and unnecessary.

Democrats have said the legislation is necessary to get the country through the pandemic, pointing to polls that show their popular support.

“There is tremendous support for these provisions on both sides of the aisle in the country,” said Senator Ron Wyden (D., Ore.), Chairman of the Senate Finance Committee.

Among the other changes Democrats are making in the Senate is increasing the size of health care subsidies for laid off workers, covering 100% of the health insurance premiums people pay with Cobra, compared to 85. % provided in the Chamber.

Democrats also weighed tax provisions in the bill. They eliminated a House of Representatives proposal that would have frozen the growth of annual limits on contributions to retirement accounts after 2030. They replaced it with stricter limits on company deductions for executive compensation, but only as of 2027.

Senators are also providing $ 8.5 billion for rural healthcare providers and setting aside $ 10 billion from state and local aid for infrastructure projects. For state and local aid, senators require individual states to receive at least as much as they received from a previous aid package and allow governments to use the funds for economic recovery efforts. They are also imposing rules on how the funds can be used, prohibiting states from using pension aid or to fund tax cuts.

Some centrist Democrats had tried to send a portion of state and local funds to expand broadband access, but the effort ran into reconciliation limitations, according to people familiar with the matter, preventing them from focusing funds too much. close up. Instead, lawmakers earmarked the $ 10 billion for general infrastructure.

—Kristina Peterson contributed to this article.