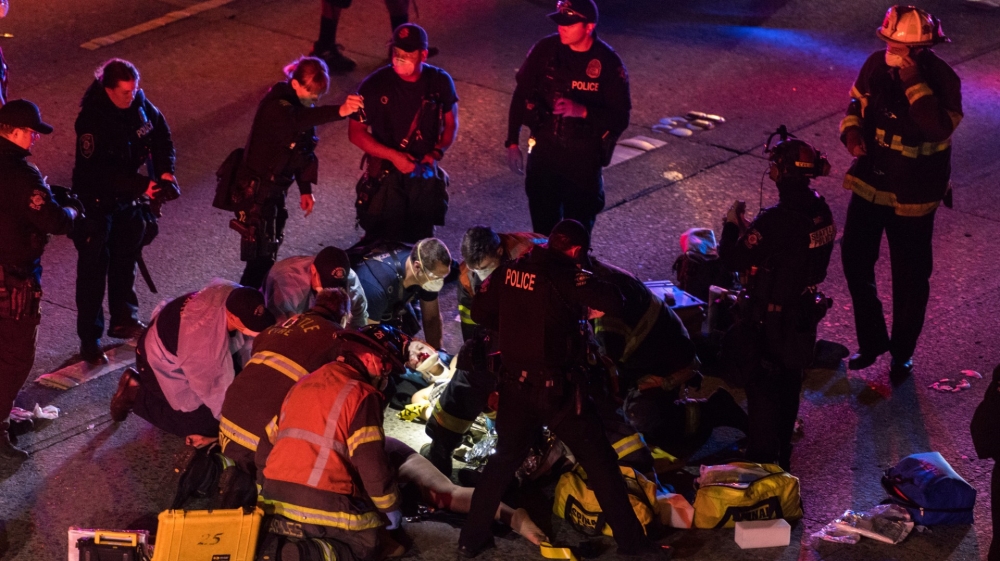 One of two people hit by a man who drove his car to a blocked Seattle highway and then to a crowd protesting police brutality has died.

Diaz Love, 32, of Portland, Oregon, was also hit by the car that crashed into a crowd of terrified protesters on Interstate 5 (I-5) early Saturday. He remained in serious condition in the intensive care unit.

According to a police report, a Seattle man drove the car around vehicles blocking the highway and accelerated into the crowd at approximately 1:40 am local time.

The suspect fled the scene, but one of the protesters got into a car, chased him, and was able to stop the vehicle by pulling forward.

The man was charged with two counts of vehicular assault, although his motive remains unknown and it is unclear if he was targeting the protesters.

Officers described him as reserved and sullen when they arrested him and asked if the beaten pedestrians were okay, according to court documents.

The highway had been closed for about an hour before the collision, part of the continuing racial justice protests that swept across the United States following the murder of George Floyd in Minnesota on May 25 after a police officer knelt in his neck for almost nine minutes.

Love was filming the protest in a nearly two-hour live Facebook broadcast, subtitled Black Femme March taking I-5 when the video abruptly ended. About 15 seconds left, cries of “Car!” You can hear it when the camera starts shaking before the tires screech and the sound of impact is heard.

Earlier this morning, two women were hit by a car and seriously injured while protesting peacefully. Many others were almost beaten and witnessed this horrible event. Our city stands alongside its friends, families, and loved ones in prayer for these women and all who were there.

A graphic video posted on social media showed the white Jaguar running toward a group of protesters behind several parked cars. The vehicle spins around the others and hits the two women, sending them flying through the air.

Katelyn Hoberecht, who worked with Taylor at Urban Animal’s veterinary clinics, told the Seattle Times that she was constantly present at the protests, “staying out all day and all night while still working full time caring for animals.”

“Summer told me about the protests and how amazing it was to be a part of something so big. A part of the story,” he said.

The Washington State Patrol said that in the future it would not allow protesters to enter I-5 and would arrest pedestrians on the highway.