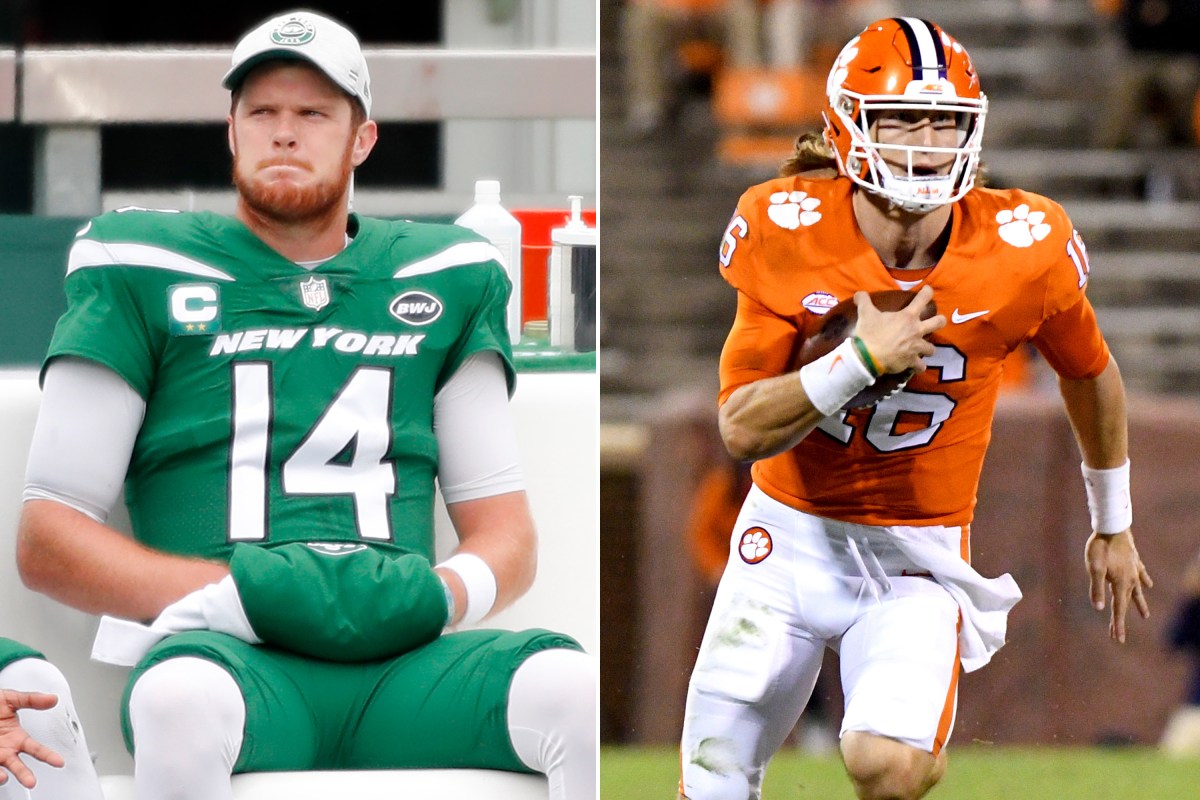 The Jets fell to 4-7 on Sunday with an 18-10 loss to the Bills at MetLife Stadium. Here are some thoughts and observations from the game:

1. Sam Darnold gave up after Sunday’s loss. During his zoom call with reporters, Darnold wore a look that I have seen from Jet players before. He looked like a beaten man. It appears that all the losers and struggling lives are getting out of Darnold. This is a look that Mark Sanchez wore in 2012, when he had to answer questions about defeat, blocking and Tim Tebow. Darnold is now answering questions about losing, blocking and Trevor Lawrence.

It hurts to see this. Darnold had high hopes when he was drafted. He was going to be a franchise keeper. Instead, he is eaten alive by the misery that is the New York Jet. The team has failed to give him a capable offensive line and capable receiver. The coaches have not helped him. This is all messed up and there is a possibility before the draft that it will be traded before the Jets take on Trevor Lawrence.

This is not to say that Darnold should be freed from all defects. He continues to make terrible decisions, such as the blockage that preceded Sunday. He still does not read the defense well and is part of the safety issue. Nevertheless, Darnold’s assessment is difficult due to his supporting cast.

Darnold played well the last two times, returning from injury. He led the return to victory at Buffalo in 2018 when he came back from a leg injury and won the Cowboys last year when he came back after Mono. This time, however, he played his worst game. His pass rating of 31.1 on Sunday was the second lowest of his career. Only the “ghost” game against the Patriots was worse (3.6). He completed just one pass in the second half.

It appears that Darnold is another promising first-round pick that flopped with the Jets. It is sad to see.

2. Joe Douglas’ remake Offensive Line is officially a flop. This group could not defend Darnold on Sunday. He was sacked six times as Rekha insisted on how to stop the Bills’ blitz package.

It was the fifth different offensive line combination this season. Josh Andrews started at left guard in place of Alex Andrews (shoulder) and demonstrated why he is a backup. Andrews was terrible. Remember, the Jets signed him this offseason and chose to keep him over Brian Winters to save some money. Winters for bills started on Sunday.

At least Andrews is a backup. George Fant, Greg Van Rotten and Connor McGovern were brought here for a start and have not played as such. Fantastic, who played with a knee injury, looked terrible on Sunday.

Midson has no way of fixing the offensive line, so the Jets will have to expect improvement. This offseason, however, will be another offensive line makeover by Douglas and he needs to get it right this time.

3. I know we are not allowed to attribute anything to Adam Gesse, but I felt he showed something with his decision to hand over the play-calling to Dowell Loggins. Anyone who has spent any time around Gesse knows how important it is for him to play and it is part of the work he remembers. Obviously, the results have not been. Gesse puts her pride aside and tries to do something different, leading the team to call the culprits a crime. It almost worked.

I doubt Loggins will get to call against the Chiefs during this week’s game. Gacey tried to stay out of Loggens’ way last week, wanting Loggains to feel pressure from him. This week, there should be more of a collaboration. Gesse saw some things on Sunday that might not happen when she had her head down. The two working together may get some answers.

4. It’s losing in this pathetic Jets season, but second-year defensive lineman Quinnin Williams is quietly having a very good season. On Sunday against the Bills, he received four tackles, third-down sacks and three quarterback hits. This was followed by a very strong game against the Dolphins last week, where she took the front several times.

Now, Williams needs to do this on a consistent basis. He must prove that he is not Leonard Williams, who will disappear in a week. Quinine Williams is also required to cut penalties. He gave the passer a third penalty on Sunday, the most in the NFL. He has to be lowered while hitting the quarterback. But Williams is showing progress and looks like she could be the building block for the future.

The Jets only have 14 passes of 20 or more. Only Patriots (12) are short. On Sunday, he had a pass from 20 yards, a third, and a throw from 20 Braxton Berrios. The Jets will have to find a way to make some explosive plays or field them to defend.

Frank Gore played only 16 snaps, which was 28 percent. The Jets are shifting to La’Mical Perine but I was still surprised to see Gore’s snaps dip so low.

Linebacker Neville Hewitt had 10 singles and 13 total tackles in the game. Hewitt has solidified in the middle for the Jets this season, replacing CJ Mosley.