Saleh, from Yemen, says he’s ready for a new page & # 39; with a coalition led by Saudi Arabia 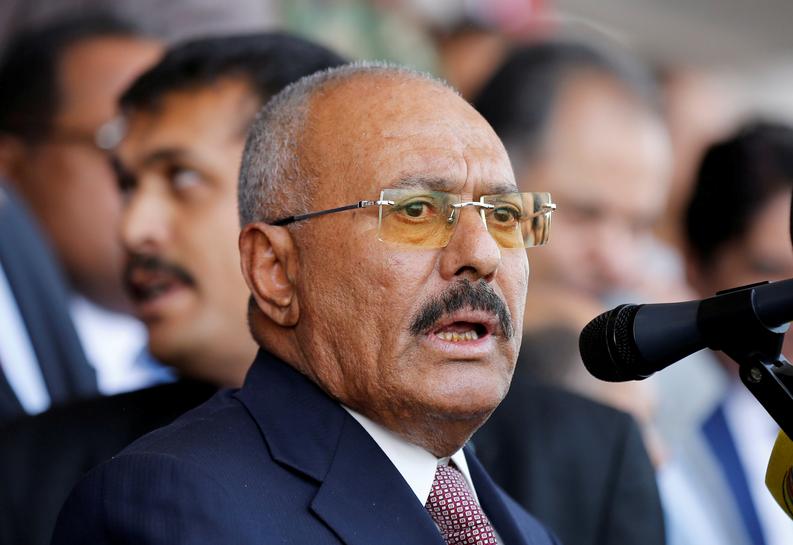 ADEN (Reuters) – Former Yemeni President Ali Abdullah Saleh said on Saturday he was ready for a "new page" in relations with the Saudi-led coalition fighting in Yemen if it stops the attacks against his country.

PHOTO OF THE ARCHIVE: Former Yemeni President Ali Abdullah Saleh delivers a rally to commemorate the 35th anniversary of the establishment of his party of the General People's Congress in Sanaa, Yemen, on August 24, 2017. REUTERS / Khaled Abdullah / Photo Archive

The call came when his supporters fought against the Houthi fighters for a fourth day in the capital, Sanaa, while both sides exchanged blame for an ever widening gap between allies that could affect the course of the war. civil.

Together they have fought against the Saudi-led coalition that intervened in Yemen in 2015 with the aim of restoring the internationally recognized government of President Abd-Rabbu Mansour Hadi after the Houthis forced him into exile.

Clashes between supporters of Saleh and the Houthis underscore the complex situation in Yemen, one of the poorest countries in the Middle East, where a proxy war between the Houthis aligned with Iran and Hadi backed by Saudi Arabia has caused of the worst humanitarian catastrophes in recent times.

"I appeal to the brothers in the neighboring states and the alliance to stop their aggression, lift the siege, open the airports and allow food aid and the salvation of the wounded and we will change a new page by virtue of our neighborhood , "Saleh said in a televised speech.

"We will deal with them in a positive way and what happened to Yemen is enough," he added.

Saleh, who was forced to resign by a mbadive uprising in 2011 against his 33 years in office, said that Yemen's parliament, dominated by its GPC party, was the only legitimate power in the country and was ready to converse with the coalition.

The coalition led by Saudi Arabia welcomed the change of position of Saleh.

In a statement from the Saudi-owned Al-Hadath channel, the coalition said it was "confident in the will of the leaders and sons" of the Saleh General Popular Party (GPC) party to return to the Arab fold.

The coalition accuses non-Arab Iran of trying to expand its influence to Arab countries, including Yemen, which shares a long border with Saudi Arabia, by aligning with the Houthis and Saleh.

The Houthis accused Saleh of treason, and pledged to continue the fight against the coalition led by Saudi Arabia.

A supporter of former Yemeni President Ali Abdullah Saleh is seen with his gun in the al-Saleh mosque before Friday's weekly prayers in Sanaa, Yemen on December 1, 2017. REUTERS / Mohamed al-Sayaghi [19659014] "It is not strange or surprising that Saleh rejects an badociation he never believed in," the group's political bureau said in a statement. "The priority has been and is to face the forces of aggression."

Residents of Sanaa described the intense fighting on the streets of Hadda, a residential district in the southern part of the Yemeni capital where many of Saleh's relatives live, early on Saturday, with sounds of explosions and gunfire listened while the streets were deserted.

The fighting diminished in the afternoon when Saleh supporters took the lead, but intermittent fire was heard.

There was no immediate news about casualties. Both sides reported that at least 16 people died in the fighting, which began on Wednesday when armed Houthi fighters entered the main mosque complex, firing role-playing games and grenades.

The GPC party of Saleh accused the Houthis of not respecting a truce and said in a statement on its website that the Houthis are responsible for dragging the country into a civil war.

He also appealed to supporters, including tribal combatants, to "defend themselves, their country, their revolution and their republic …"

The GPC appealed to the army and security forces to remain neutral in the conflict.

But the group leader Ansarullah of Houthis warned that the biggest winner of what he described as Saleh's "sedition" was the coalition led by Saudi Arabia.

"I appeal to the leader Saleh to show more wisdom and maturity (…) and to not pay attention to the calls of incitement," said Abdel-Malek al-Houthi in a speech on the group's Al-Masirah TV, adding that his group was ready to sit down to arbitrate and stick to any decision.

Yemen's civil war has killed more than 10,000 people since 2015, displaced more than two million people, caused a cholera outbreak that has infected nearly a million people and put the country on the verge of the famine.