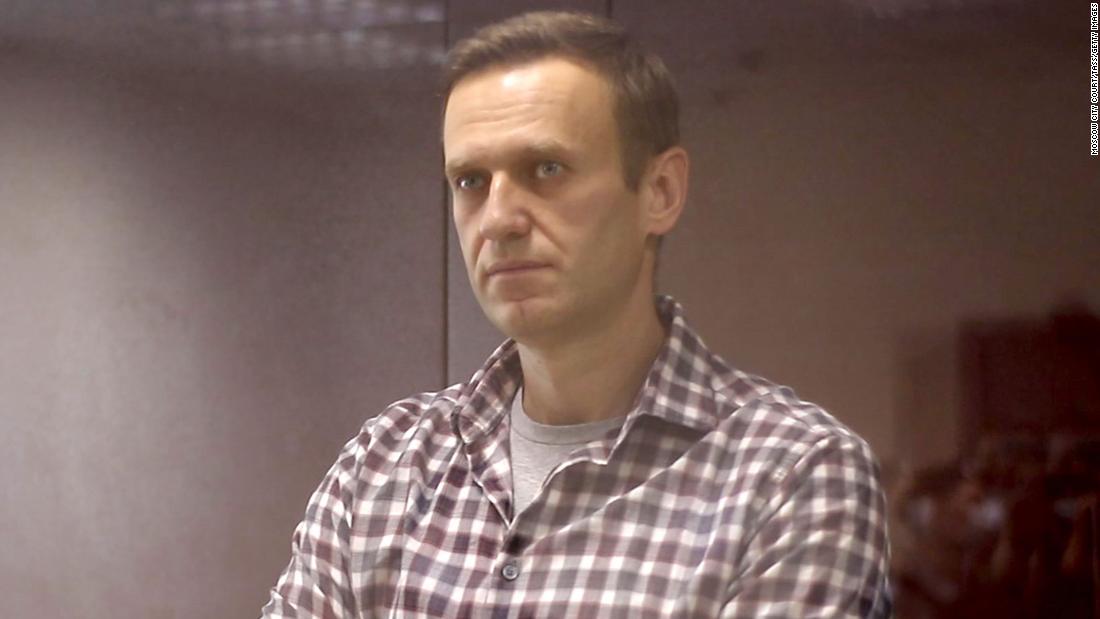 The Russian Federal Penitentiary Service (FSIN) said on Thursday that prisoners in the Vladimir region of the country, where Navalny is being held, received medical examinations on Wednesday at the request of inmates, according to state media TASS.

Navalny was among those examined and the anti-corruption activist “was in generally good and stable health,” the FSIN statement said.

He has been a perennial thorn in the side of Russian President Vladimir Putin, raising concerns for his safety in the country, and the activist nearly died after he was poisoned with the nerve agent Novichok last August.

A joint investigation by CNN and the Bellingcat group implicated the Russian Security Service (FSB) in the Navalny poisoning. Russia denies involvement in the poisoning, but several Western officials and Navalny himself have openly blamed the Kremlin. Navalny returned to Russia in January from a five-month stay in Germany, where he had been recovering.

Navalny’s legal team told CNN on Wednesday that he had complained of back pain in the past week and began to feel numbness in one of his legs on Tuesday.

Vadim Kobzev, one of the activist’s lawyers, told CNN that he and his colleague Olga Mikhailova were waiting at Penal Colony No. 2 in Pokrov in the Vladimir region to see Navalny on a scheduled visit on Wednesday.

After a few hours of waiting they were not allowed to see him. The couple were told that the visit had been canceled due to “regime measures.”

“We don’t know what’s behind this,” Kobzev said.

“We demand that we can see him to be sure of his health. [Last] On Friday, he was examined by a neurologist, the diagnosis was never given after that. “

The attorney added: “He was prescribed two ibuprofen tablets a day. It all started with his spine, [on Tuesday] He said his leg was starting to feel numb. If the leg problems are related to the spine, not being a doctor, I can’t tell you. “

Navalny’s lawyers said they entered the penal colony on Thursday, but it is unclear if they will be able to see the activist.

Navalny was jailed earlier this year for violating probation terms in a 2014 case in which he received a three-and-a-half-year suspended sentence.

A Moscow court took into account the 11 months that Navalny had already spent under house arrest as part of the decision and replaced the remainder of the suspended sentence with a prison term last month.

Kobzev stressed Wednesday that it was crucial that Navalny’s lawyers meet with him to verify his well-being.

“We believe that, firstly, we must see it, and secondly, it must be examined by a normal civil specialist who diagnoses and prescribes the treatment to which it can be subjected,” he said, adding that at least one of the attorneys for the activist see it every day.

Maria Pevchikh, head of the investigations unit at Navalny’s anti-corruption fund, took to Twitter to express her concerns about her health.

“This is the first time Navalny’s attorneys have not been allowed to see him on a scheduled day. Alexey’s exact whereabouts are currently unknown,” he wrote.

“The FSIN said that Navalny had undergone a medical examination in the colony and his health was determined to be ‘satisfactory’,” Navalny’s press secretary Kira Yarmysh tweeted. “In Omsk they also said it,” he added, referring to the time when Navalny was in a coma after his poisoning in 2020.