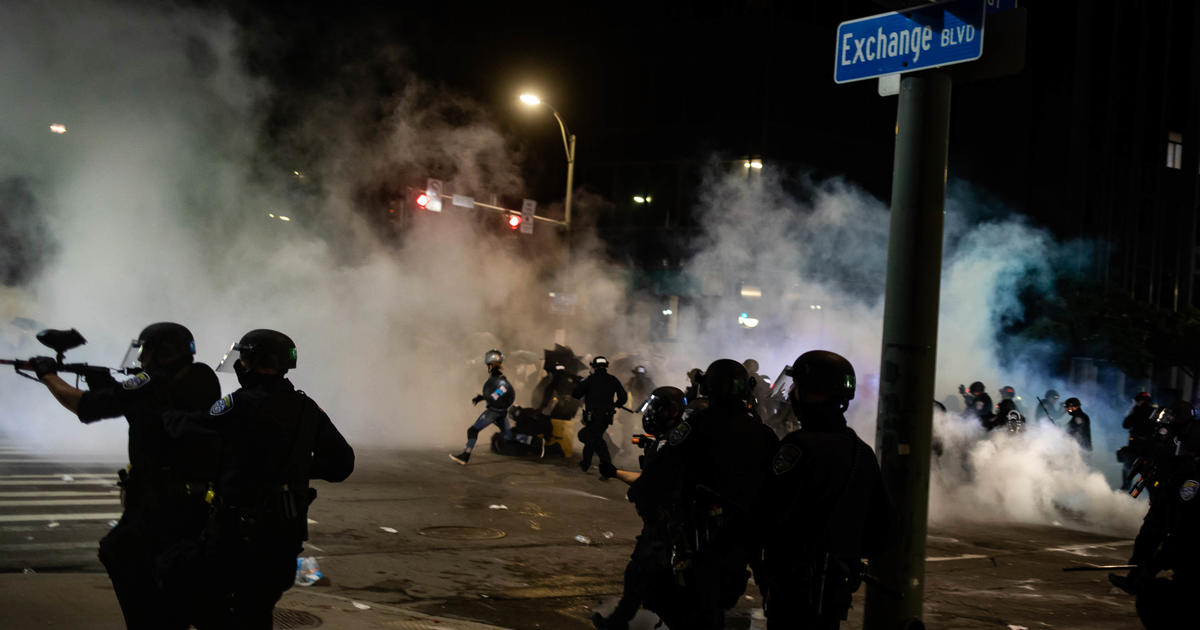 A federal civil rights lawsuit was filed Monday against city officials and police in Rochester, New York, alleging decades of “inhumane” and racist police violence against protesters and residents. The lawsuit comes more than a year after Daniel Prude died in police custody, which led to the national condemnation of the use of police force in the city.

“In short, an impressive historical record spanning more than four decades demonstrates that the use of force practices of the Rochester Police Department continue to be inhumane, racist and antithetical to the functioning of a civilized society,” the lawsuit states.

The lawsuit, filed by a group of attorneys, activists and individuals who attended protests in the city, alleges that Rochester police routinely exert excessive force against minorities, especially during protests, and that department and government officials the city have let such conduct go largely unpunished. The nearly 100-page document details more than 50 cases of alleged police abuse of people of color, for which the vast majority of officers were never formally disciplined.

As an example of the pattern of alleged conduct, the lawsuit largely focuses on the use of force against protesters, doctors, journalists and legal observers who took to the streets in September 2020 to protest Prude’s death.

Prude, a black man, died last March after suffering a mental health episode and his family called the police for help. At approximately 3:15 a.m. on March 23, Rochester police said they found Prude naked in the middle of the street.

As Prude carried out his orders to lie on his stomach and allow himself to be handcuffed, he then sat up and began yelling at the officers, according to body camera footage of the interaction. The police then put a hood over his head and pressed his face to the ground for more than three minutes. Prude eventually stopped responding and later died in a hospital.

The medical examiner ruled that his death was a homicide, attributing it to “complications of asphyxia in the framework of physical restraint”, as well as “excited delirium” and intoxication by PCP. A grand jury refused to charge the officers implicated in Prude’s death in February.

The circumstances surrounding Prude’s death were not made public until September 2020, when Prude’s family released body camera images of the incident at a press conference on September 2. The news sparked immediate outrage and the first protest occurred later that night.

During that protest and the demonstrations in the weeks that followed, the lawsuit alleges that Rochester police used “extreme and unnecessary force,” including tear gas, pepper spray, blunt-impact projectiles, pepper balls and other “less than lethal” weapons. . During the first three nights of protests, authorities deployed 77 tear gas canisters and 6,100 pepper bullets, the lawsuit says.

“To be frank, what I have witnessed has been nothing short of abject terror, carnage and wanton brutalization,” said Rochester photojournalist Reynaldo DeGuzman, who attended the protests, at a press conference announcing the lawsuit, according to WROC, affiliate. from CBS.

The lawsuit details dozens of cases of alleged police violence in the protests, including an incident on September 3 in which an officer allegedly shot a man in the eye with a pepper ball at “point-blank range,” rendering him permanently blind. The officers are charged with “intentionally” shooting at doctors who tried to provide help, despite the fact that the doctors allegedly wore bright red jackets identifying who they were.

On Sept. 4, Rochester looked like “a war zone,” with officers “throwing grenades, tear gas and thousands of pepper balls into the crowd,” the lawsuit says.

That night, the police allegedly trapped a group of protesters on a bridge, a tactic commonly known as “boiled”, before attacking them with various weapons. “Videos from that night show phalanxes of heavily armed police officers using pepper balls, 40mm kinetic bullets, tear gas and batons to assault various groups of protesters equipped only with umbrellas, cardboard boxes and plastic children’s sleds against the military arsenal of the RPD “. says the lawsuit.

“In New York City, for example, where thousands of protesters took to the streets, officers from the New York Police Department did not fire a ball of pepper,” the lawsuit adds. “By contrast, an RPD officer on the night of September 4, 2020, fired 148 pepper balls in the span of just twenty minutes.”

The lawsuit also accuses city officials of running a “bogus internal disciplinary system” and refusing to hold accountable officers who used excessive force during the protests or in their daily work.

Of the 923 civilian complaints of excessive use of force between 2001 and 2016, the police chief only sustained 1.7%, the lawsuit says. The strictest sanction applied in those 16 sustained cases “was 6 suspensions, the majority of between 1 and 20 days.”

“By failing to meaningfully train, supervise, and discipline officers who use excessive force, and instead suppressing evidence of officer misconduct and targeting critics of the department, the City has fostered a culture of violence and violence. impunity in their ranks, “says the lawsuit.

In a statement to CBS News, the city said Rochester Mayor Lovely Warren “welcomes” a Justice Department investigation into the police department, citing recent reforms the city has implemented, including the requirement that new officers live in the city and allow the mayor fire officers for cause.

The lawsuit names Rochester city and police officials, as well as hundreds of police officers, as defendants, and seeks monetary damages and the appointment of an independent monitor to the police department, among other requests.

“In the absence of external enforcement, the system will not change on its own: to date, the Department has not fired or sanctioned any of the officers known to have used excessive force against Daniel Prude or any of the officers who carried out blatant displays of force during the September 2020 protests, including those captured on video, “the lawsuit says, adding:” The plaintiffs file this lawsuit to end the decades-long use of unconstitutional violent force by the RPD, before of more lives being produced, more lives of blacks and brunettes. He lost. ”

Neither the Rochester Police Department nor the union representing the officers immediately responded to CBS News’ request for comment.