Riots, protests in Minnesota, Chicago and elsewhere in reaction to police shootings 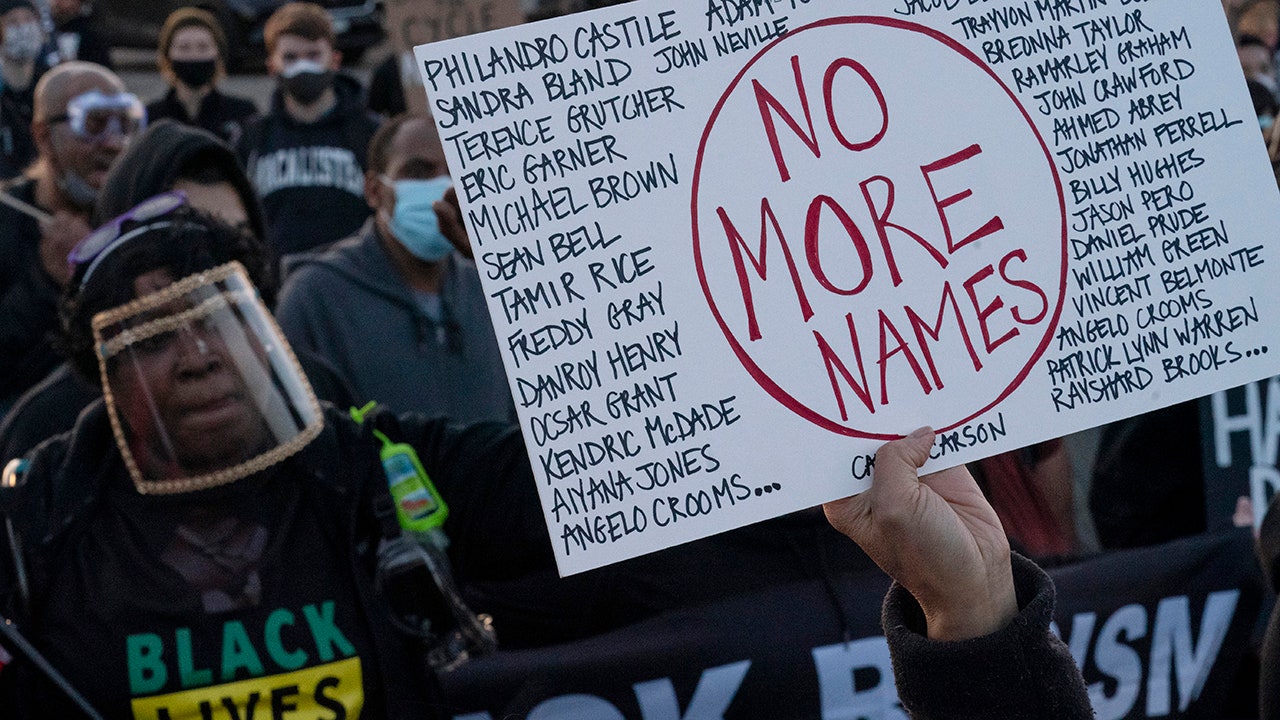 Crowds took to the streets in several cities across the United States on Friday night, in reaction to the police shooting deaths of Daunte Wright in Minnesota and Adam Toledo in Chicago.

The biggest upset on Friday appeared to be in Brooklyn Center, Minnesota, the Twin Cities suburb where Wright was shot and killed last Sunday, but events appeared to be deteriorating in Portland, Oregon, early Saturday morning, with reports of fires and possible shots.

Here are some details on some areas where crowds collided with police:

City officials initially tried to waive a curfew on Friday for the first time since protests broke out Sunday after police shot Daunte Wright dead, according to FOX 9.

But Mayor Mike Elliott’s attempt to “take a different approach” was reversed around 10:30 pm, with the emergency curfew set from 11 pm Friday to 6 am Saturday.

A protester holds up a placard with the names of people who died during police incidents, during a protest over the fatal shooting of Daunte Wright during a traffic stop, in front of the Brooklyn Center Police Department, Friday, April 16, 2021, in Brooklyn Center, Minnesota. . (Associated Press)

Around 9:30 p.m., rioters broke through a barrier surrounding the building, prompting a police response of explosions and pepper spray, the station reported. The meeting, which also included items thrown at police, was declared illegal shortly after, according to FOX 9.

Crowds of thousands of people gathered in Logan Square in reaction to this week’s release of video footage of the March 20 police shooting of 13-year-old Adam Toledo.

Police and protesters were seen clashing at one point, but the meeting was smooth, Chicago’s FOX 32 reported.

Children wearing face masks were seen handing water bottles to police officers, according to the station.

On Thursday, Chicago Mayor Lori Lightfoot called on the city to remain calm and promised that Toledo’s death would be fully investigated.

Portland: Third riot of the week

Two separate marches were held in downtown Portland on Friday night and at least one of them declared a riot, according to FOX 12 Oregon. They occurred hours after police shot and killed a suspect in a city park.

Separate marches began at Waterfront Park and Director Park. A heavy police presence was seen later in the evening.

Video posted on social media showed a fire near an Apple store.

Friday’s riot was the third declared in Portland this week, following riots Monday night and Tuesday night, the station reported.

On Friday morning, an officer in Lents Park killed a suspect accused of pointing a gun at police. Neither the deceased person nor the officer were immediately identified.

Police said some bystanders tried to interfere with the investigation of the shooting, tore the crime scene tape and entered the police work area.

Some officers were struck by thrown objects while trying to restore order, FOX 12 reported.

The two North Carolina cities saw crowds gather to protest recent police shootings that have occurred across the country.

Protesters marched through downtown Raleigh, but their numbers were fewer than what was seen last spring, following George Floyd’s death in police custody in Minneapolis, the News & Observer of Raleigh reported. Many businesses had been closed before potential problems, the newspaper reported.

In nearby Durham, more than 100 people gathered near the county courthouse, according to the newspaper. Many carried banners with messages such as “Stop killing us,” the report said.

Some in the crowd were seen overturning garbage cans and painting buildings, while others burned American flags and yelled “To hell with the police!” reported the newspaper.

Protesters began gathering around Frank Ogawa Plaza around 8 pm, calling it “Oscar Grant Plaza” in honor of a 22-year-old black man who was killed by a BART traffic police officer in Oakland on January 1, 2009.

Friday’s meeting began to dissolve as the evening wore on, with some groups breaking store windows when they left the area, FOX 2 reported.

Police had outlawed the gathering of about 200 people around 11 p.m., according to the station.