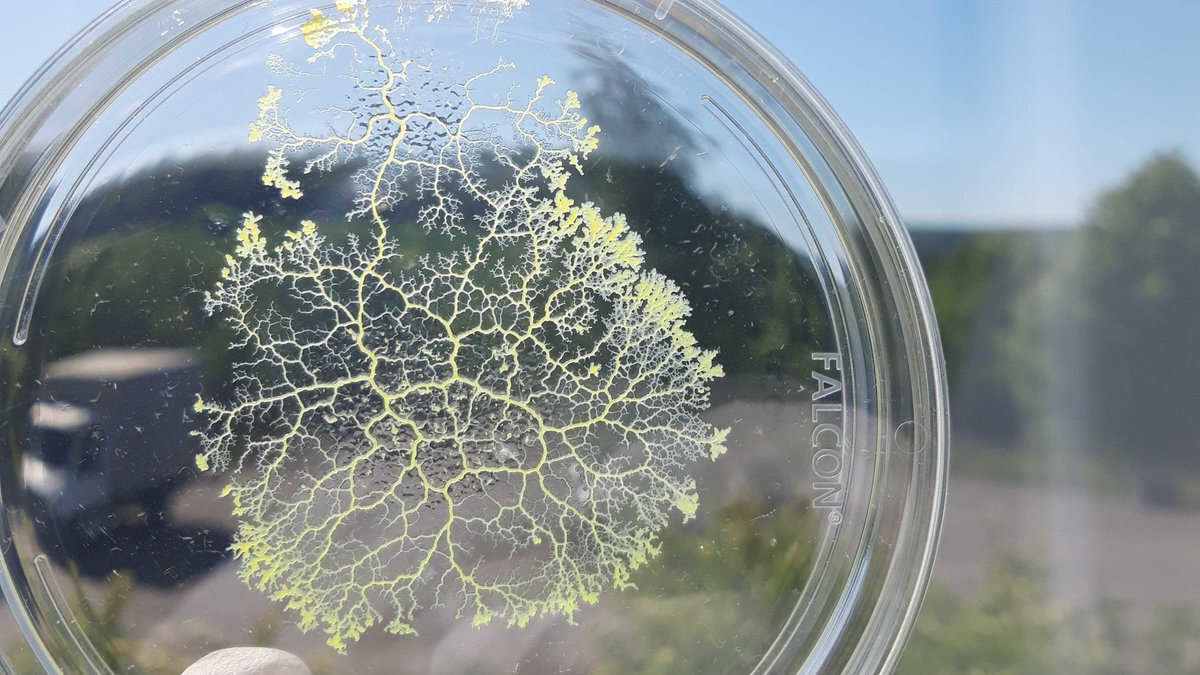 Having a memory of past events allows us to make smarter decisions about the future. Researchers from the Max Planck Institute for Dynamics and Self-Organization (MPIDS) and the Technical University of Munich (TUM) identify the basis for the formation of memories in the slime mold Physarum polycephalum, despite its lack of a nervous system.

The ability to store and retrieve information gives an organism a clear advantage when it comes to foraging for food or avoiding harmful environments, and has traditionally been associated with organisms that have a nervous system. A new study written by Mirna Kramar (MPIDS) and Professor Karen Alim (TUM and MPIDS) challenges this point of view by discovering the amazing capabilities of a highly dynamic single-celled organism to store and retrieve information about its environment.

Window to the past

The slime mold Physarum polycephalum has puzzled researchers for many decades. This unique organism, which exists at the crossroads between the kingdoms of animals, plants, and fungi, provides insight into the early evolutionary history of eukaryotes. Your body is a single giant cell made up of interconnected tubes that form intricate networks. This single amoeba-like cell can stretch several centimeters or even meters, and occurs as the largest cell on earth in the Guinness Book of World Records.

The slime mold’s amazing abilities to solve complex problems like finding the shortest way through a maze earned it the attribute of “smart”, intrigued the research community, and sparked questions about decision-making at the most basic levels. of the life. Physarum’s decision-making ability is especially fascinating since its tubular network undergoes constant rapid reorganization (growing and disintegrating its tubes) while completely lacking an organizing center. The researchers found that the body weaves memories of food encounters directly into the body’s network architecture and uses the stored information to make future decisions.

Decisions are guided by memories

“It is very exciting when a project develops from a simple experimental observation”, says Karen Alim, head of the group of Biological Physics and Morphogenesis at MPIDS and TUM professor on Biological Network Theory, “We follow the process of migration and feeding the organism and observed a distinct imprint of a food source in the pattern of thicker and thinner tubes of the web long after feeding. Given the reorganization of the highly dynamic P. polycephalum web, the persistence of this imprint resulted in the idea that the architecture of the network itself could serve as a memory of the past. However, we first needed to explain the mechanism behind the formation of the footprint. “

To find out what’s going on, the researchers combine microscopic observations of the tubular lattice adaptation with theoretical models. An encounter with food triggers the release of a chemical that travels from the place where the food was found throughout the body and softens the tubes of the web, causing the whole body to redirect its migration towards the food.

“Gradual softening is where existing footprints from previous food sources come into play and where information is stored and retrieved,” says Mirna Kramar, first author of the study. “Past feed events are embedded in the hierarchy of tube diameters, specifically in the arrangement of thick and thin tubes in the network. For the softener chemical that is now being transported, the thick tubes in the network they act as highways in traffic networks, allowing transport throughout the entire body. Previous encounters imprinted on the network architecture influence the decision on the future direction of migration. “

The authors note that Physarum’s ability to form memories is intriguing given the simplicity of this living web. “It is remarkable that the organism relies on such a simple mechanism and yet controls it in such a fine-tuned way. These results present an important piece of the puzzle for understanding the behavior of this ancient organism and, at the same time, point to principles underlying behavior. We envision potential applications of our findings in the design of smart materials and the construction of soft robots that navigate through complex environments, “concludes Karen Alim.

Testing the effects of ‘noise’ on sludge mold decision-making ability

This document is subject to copyright. Apart from any fair dealing for the purpose of private study or research, no part may be reproduced without written permission. The content is provided for informational purposes only.