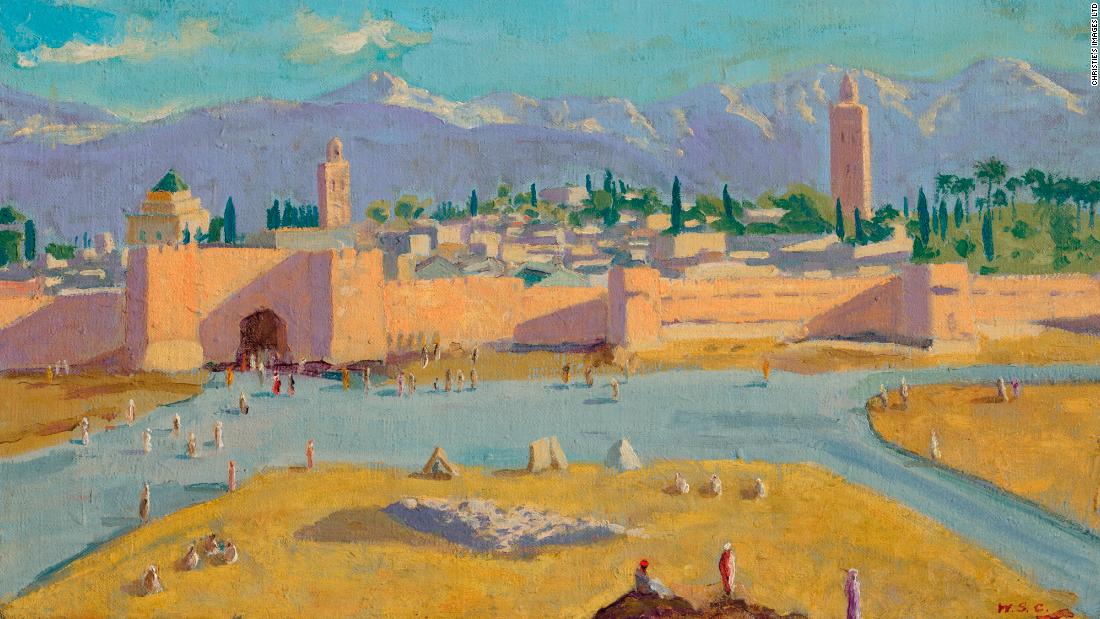 A rare Winston Churchill painting that was gifted to the President of the United States, Franklin D. Roosevelt during World War II and eventually made its way into the collection of actress Angelina Jolie has become the most expensive painting of the former prime minister. British to sell at auction, priced at nearly £ 8.3. million ($ 11.5 million) after commissions.

The work, “Tower of the Koutoubia Mosque”, was sold on March 1 by the Jolie Family Collection and features the long shadows and warm tones of a sunset in Marrakech, Morocco, a favorite subject for Churchill to paint. .

“The Tower of the Koutoubia Mosque,” a gift to former United States President Franklin D. Roosevelt, was the only painting Churchill did during World War II. The work is now the most expensive Churchill painting to sell at auction. Credit: TOLGA AKMEN / AFP via Getty Images

“Churchill first visited Morocco in 1935, where he fell in love with the quality of light there,” said Nick Orchard, director of modern British art at Christie’s in London, where the auction was held. “He felt that his paintings of the country were among the best.”

According to a source with knowledge of the sale, actor Brad Pitt purchased the sunset scene from Churchill as a gift to Jolie in 2011. The couple separated in 2016 after two years of marriage.

The “Tower of the Koutoubia Mosque” is the only painting that Churchill made between 1939 and 1945, during World War II.

In January 1943, after jointly attending the Casablanca Conference in Morocco to develop a strategy against Nazi Germany, Churchill convinced Roosevelt to join him in nearby Marrakech and watch the sun set behind the mountains of the Atlas. Their brief stay together was commemorated by the painting, which Churchill created the day after Roosevelt’s departure. After the conference, the two leaders demanded an “unconditional surrender” from Germany, Italy and Japan, a historic declaration that had a far-reaching impact on the war.

Actor Brad Pitt purchased the Churchill painting for Angelina Jolie in 2011, before marrying and finally separating after more than a decade together. Credit: Kevin Winter / Getty Images

Pitt purchased the painting from antiquarian Bill Rau, who previously told CNN that President Roosevelt’s son had sold the piece to a filmmaker in the 1960s. According to Rau, the painting eventually finished in New Orleans, where it remained in the wardrobe of a local family for more than five decades before a family member contacted his gallery, MS Rau.

“The painting represents the moment the two world leaders shared seeing the majestic landscape of Marrakech as the sun set over the Atlas Mountains, and knowing that Churchill gifted the painting to FDR after their time together made me even more moved “Rau said. .

“Scene at Marrakech,” another Churchill work at Moroccan sunset, sold for three times its maximum estimate during the same sale. Credit: courtesy of Christie’s

Churchill began painting well into adulthood, around 40, after a failed naval attack during World War I that cost him his title as First Lord of the Admiralty. However, he was prolific, producing more than 500 works in his lifetime.

The former prime minister’s art market continues to grow. In addition to “Tower of Koutoubia Mosque,” two other works of hers topped the Christie’s “Modern British Art” night sale.

“Scene at Marrakech”, another light-filled composition from Churchill’s favorite hangout, sold for about £ 1.9 million ($ 2.6 million), and “St Paul’s Churchyard”, sold for nearly £ 1.1 million. ($ 1.5 million). Both sales prices were more than triple their highest estimates.

“The appetite for Winston Churchill’s artwork was demonstrated to great effect at Christie’s,” Orchard said.