July 2, 2020 U.S. Comments Off on Putin granted the right to extend the rule until 2036 in an overwhelming referendum result 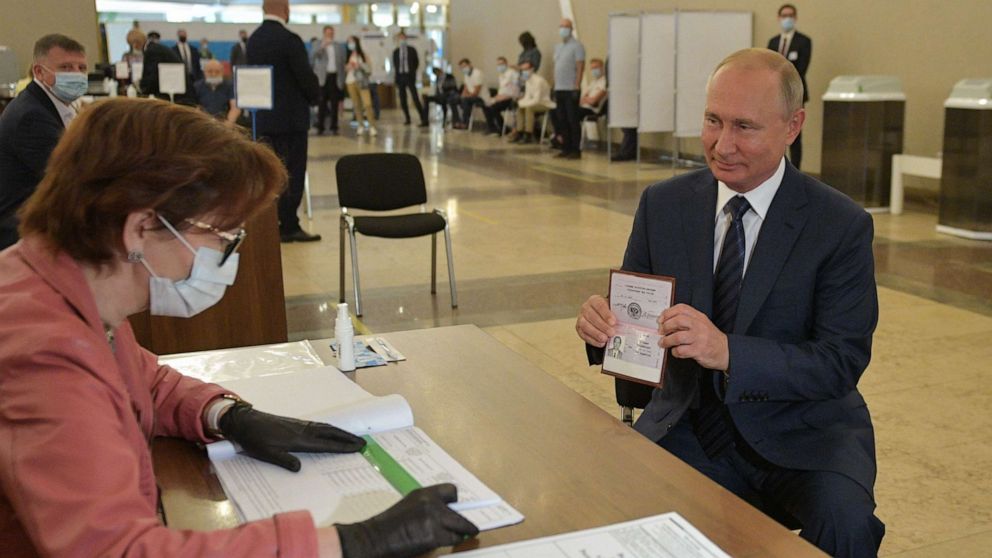 MOSCOW – The Kremlin has obtained an overwhelming vote in favor of constitutional changes that will allow Russian President Vladimir Putin to remain in power until 2036, as the Russians backed in a national referendum that ended today.

Wednesday’s result in the week-long referendum came as a small surprise amid a massive campaign by authorities to pressure people to vote and widespread concerns about voter pressure and manipulation.

It opens the way for Putin, who has ruled Russia since 1999, only interrupted between 2008 and 2012 when Dmitry Medvedev was the Russian president, to run again for two more terms six years after his current one expires in 2024. Potentially it means that Putin could rule for 16 more years, when he will be about eighty years old.

Wednesday was the last day of the seven-day vote, in which authorities have said is a measure to facilitate social distancing amid Russia’s coronavirus epidemic, which is worsening in many parts of the country. .

Russians were asked to vote “yes” or “no” in a package of more than 200 amendments that included guarantees to boost pensions, as well as changes that will inscribe some conservative values ​​promoted by Putin in the constitution. Among them was the consecration of the concept of marriage between a man and a woman, as well as an affirmation of the belief of the Russians in “God”.

However, those changes were seen by many observers as the intention to increase participation in the change that really mattered: an amendment to restore the presidential terms after the adoption of the altered constitution. That means Putin, who is currently in his fourth presidential term, can run for elections again, despite the constitution still having a two-term limit.

Critics of the measure have denounced it as an illegal “constitutional coup”. On Wednesday night, a few hundred people gathered in Moscow’s central Pushkin Square to protest. The Russian opposition against the Kremlin accused the authorities of falsifying the result, pointing to exit polls they had conducted in Moscow and Saint Petersburg, suggesting that the amendments had been rejected.

The vote was already largely symbolic, as the Russian parliament had already approved the amendments. But the vote allows the Kremlin to say that the changes have a stamp of public legitimacy.

“Putin is using the public vote to make ordinary people his accomplices by extending his rule and sanctioning the dominance of an ultra-conservative ideology,” Andrey Kolesnikov, a member of the Moscow Carnegie Foundation, wrote in a column this month.

In a speech on the eve of the referendum, Putin, who voted at a polling station in Moscow on Wednesday, did not mention his potential to extend his rule. Some analysts believe that he has now pursued constitutional changes to avoid becoming lame before 2024 and to avoid efforts to succeed him.

Putin himself said this month that the vote was necessary to prevent “officials’ eyes from wandering in search of successors.”

The vote came at a time when Putin’s popularity suffered an unusual weakening. A poll by Russia’s only independent pollster in May showed Putin’s approval rating had dropped to 59%, the lowest in 20 years. Another survey by Levada in January showed that the number of Russians who “trust” Putin has almost halved in two years.

That decline has been exacerbated by the arrival of the pandemic and its economic consequences, against which the government has provided little help.

And while many Russians still support Putin, his move to stay in power beyond 2024 is highly controversial according to Levada polls. Denis Volkov, deputy director of Levada, told ABC News last week that his poll showed that Russians were roughly “50-50” divided on the issue.

Authorities have used a radical campaign to ensure high participation, offering the opportunity to win prizes, including cash and even apartments for participants. Russian celebrities have also been offered payments to make statements supporting the amendments.

There were also widespread reports of public sector workers, including doctors and teachers, pressured to vote, a common tactic in the former Soviet countries.

Authorities have used the coronavirus epidemic to relax voting rules. People were allowed to vote from home and at their places of work and in Moscow and Saint Petersburg online. Many of those measures offer greater opportunities for electoral fraud, electoral transparency activists have said.

This week, two journalists reported that they had voted twice, once online and once at a voting table. One, Pavel Lobzov, a broadcaster for the liberal TV Rain station, was questioned by police afterward.

Total turnout for the election commission was over 65%, notably higher than what Levada and many other political observers polls had predicted to be realistic.

Opposition activists in an anti-referendum campaign called “Nyet” or “No,” said their own exit poll in Moscow, where Putin is much less popular than elsewhere, showed that 55% of voters had voted. against the amendments, compared to 45% for.

The opposition had split over whether to boycott the vote, and many who opposed the changes had said they would stay home. Alexey Navalny, Russia’s leading opposition figure, said it was clear that the outcome had been decided in advance.

“We saw a show, with a previously planned ending,” Navalny said in a video posted on YouTube.

Golos, an NGO that monitors the elections, said it had registered more than 1,000 violations during the vote. Russia’s electoral commission and the interior ministry said the number of violations was not enough to affect the outcome of the vote.

This week, in Moscow polling stations, some “for” voters told ABC News that they support conservative additions to the constitution and that they want Putin to remain in power.

“Why should we change a president for another president? He will come and he will not know [what to do]”Lyudmila Trukacheva, 67, said after voting.” Putin is sensible, intelligent. He is an orthodox person, “he said.

By obtaining the resounding result, Putin hopes to assert his own power among the Russian elite, disturbed by the prospect of his term ending, Tatiana Stanovaya, a non-resident fellow of the Moscow Carnegie Foundation, wrote in an article published before it ended. the vote on Wednesday.

“Basically, you are prohibiting your associates from seeking a successor and discussing your own future,” he wrote.

“But pragmatic elites will have a much more sober view of things. They know exactly how voting works in Russia, and that same 70 percent can easily be read as 25 percent real support, or even a loss of confidence for complete, “he said. wrote