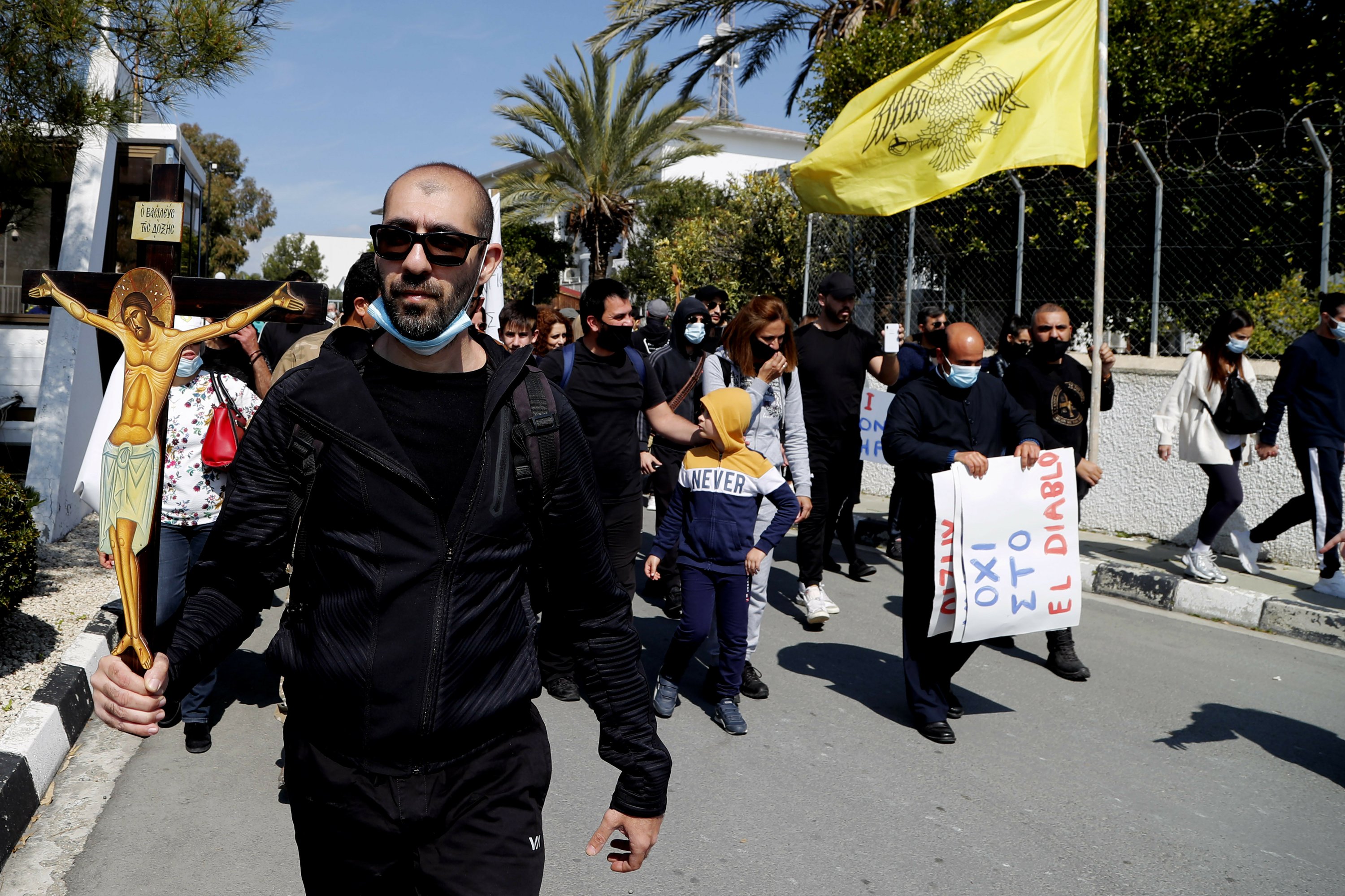 Dozens of faithful Orthodox Christians held up wooden crosses and sang Church hymns outside Cyprus’s state broadcaster on Saturday to demand the withdrawal of the country’s controversial participation in the Eurovision song contest, titled “The Devil,” that they say promotes the satanic cult.

Some of the protesters, including families, held signs that read in Greek: “We are protesting peacefully, not El Diablo”, “Repent and return to Christ” and “Christ saves, Devil kills.”

The announcer and singer of the song insist that it has been misinterpreted and the song is actually about an abusive relationship between two lovers.

The protest came several days after the powerful Orthodox Church called for the removal of the song that it said mocked the country’s moral foundations by defending “our surrender to the devil and promoting his worship.”

The Holy Synod, the Church’s highest decision-making body, said in a statement that the song “essentially praises the fatalistic submission of humans to the authority of the devil” and urged the state broadcaster to replace it with one that “express our history, culture, traditions and our claims”.

Last week, police charged a man with threatening and causing a riot when he stormed onto the grounds of the public broadcaster to protest what he condemned as a “blasphemous” song that was an affront to Christianity.

The state broadcaster insisted the entry would not be withdrawn, but board chair Andreas Frangos admitted that organizers should have done a better job of explaining the song’s central message, the lyrics of which include: “I gave him my heart to the devil … because he tells me that I am his angel “.

Even the Cypriot government got into the controversy, and presidential spokesman Viktoras Papadopoulos said that while dissenting views are respected, the government cannot override freedom of expression.

“The Government fully respects creative intellectual and artistic freedom that cannot be misinterpreted or limited by a song title, and unnecessary dimensions should not be attributed,” Papadopoulos said in a written statement.

The song’s performer, Greek artist Elena Tsagrinou, said the song is about a woman crying out for help after falling in love with a “bad boy” known as “El Diablo” and coming to identify with and bond with her abuser. Tsagrinou insisted that any other interpretation is “unfounded”.

“The song sends a strong message, one against any form of abuse, like the one broadcast on ‘El Diablo,'” Tsagrinou told The Associated Press in a written statement. “In these times of the ‘Me Too Movement’, that message is extremely relevant and can be felt not only in Cyprus, but also throughout Europe and beyond.”

She added that she is a Christian and that her faith was very important to her.

Addressing the song’s detractors, Tsagrinou said that “we must all embrace the song’s true and intended message” and that people are now stepping forward with their own stories of abuse.

“Music unites and empowers. Let’s focus on that and the important issues around us and leave behind misinterpretations and dark thoughts, ”Tsagrinou said.