Progressive victories hide the pernicious shift to the right. 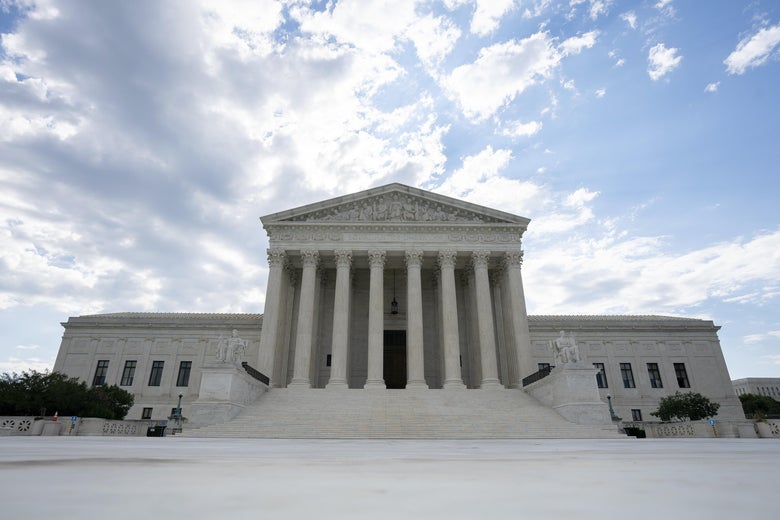 In October, at the start of the Supreme Court’s term, Mark Joseph Stern of Slate predicted that the session could be “a bloodbath for progressives.” Things are very different now than they were in October, and when the term ended last week, many of the cases seemed to have progressive results: the judges protected gay and trans workers from being fired, they decided no to influence gun rights, and cracked down on abortion restrictions in Louisiana. While it wasn’t the bloodbath Stern predicted, his colleague Dahlia Lithwick warns progressives not to be too comfortable.

In the Monday episode of What Next, I spoke to Lithwick about what just happened in the Supreme Court and why these progressive wins aren’t necessarily what they seem. Our conversation has been edited and condensed for clarity.

Mary Harris: I was reading his and Mark’s summary of this court term, and you seemed impressed and upset by this court. Can you explain that a little?

Dahlia Lithwick: In a world where so many people in elected office are bad actors who act badly or good actors who act ineptly, there is one actor who acts skillfully, and that is John Roberts. He is playing three-dimensional chess compared to the hungry hippos that pass in the other branches. On one level, there is real integrity here, and I give it up. Then there is something else that is a little more pernicious and dangerous, and that is a slow and progressive judicial restructuring of the world on the right. It’s happening in small increments, and it’s brilliant because you’ve managed to get the effects you want in many, many, many, many cases without anyone assaulting the courts with lit torches. As a craftsman, there is no president of the court in my memory who is like him.

Towards the end of the period, I felt there was a palpable sense of relief from progressives who thought: OK, we got some amazing wins here. But I want to dig a little deeper into them so that we can reveal this icy shift you’re talking about. Let’s start with June Medical, which is the case in Louisiana, where Louisiana decided it was going to draft a law that violated Supreme Court precedents, which said that doctors at abortion clinics cannot be required to have hospital admission privileges because it is too much of a burden. John Roberts wrote the opinion that basically said: You can not do that. We have a precedent here. But you wrote about how there were things within this decision that really made it less progressive than you might think on the surface.

When that decision collapsed, there was a quadrant of progressive court watchers who said: Thank God. John Roberts, what a guy. He turned over and threw himself with the Liberals because he is a man of great principle and integrity. And then there were a lot of people like me who said, OMG, the sky is falling. Basically he said so, but due to the fact that this case is literally identical to the Texas regulations that were repealed four years earlier, he would have voted to uphold those regulations. Kind of “don’t pee on my leg and tell me it’s raining.”

Four years ago in that other case, Comprehensive women’s healthJudge Stephen Breyer added teeth to the undue burden test, where he said he will weigh the burden on women against the supposed benefits of these health regulations. Roberts just took a red pen for that. The state no longer has to demonstrate that there are health benefits in the regulations. So he said, I believe in the precedent. But then he gutted the precedent that was Comprehensive women’s health and I went back to the Casey preceding, which is much weaker.

“This seemed like a victory for the people and for transparency, but it was the court that once again helped cover Triumph.”

How will it be functionally?

I think what you will see are just different types of regulations that are going to say that they will help women make better decisions:this will give you more information, it will give you more time to think“But it will have the effect of making abortions more and more difficult.”

Let’s talk about another one of these decisions that is narrow but that perhaps was interpreted, at least at first, as a kind of progressive victory. This is Trump’s tax case. I was listening to this live on the radio when the decision came out. He summarized how complicated and misunderstood the rulings in this court can be, because initially the host said: We have a decision. Trump cannot block this. And the feeling was that maybe we will see these tax documents right away. And gradually, over the course of the radio show, he realized that no one will see them soon.

I think this is another outright triumphant statement on paper that the President is not immune to scrutiny. And in both cases, by 7–2 margins, we had an outright repudiation of the completely absurd claim that the President could not be investigated. These are not close cases, so it looks like a great victory. But as you say, when people read the opinions, they realize that we are not seeing any of those documents, certainly not before the elections. And I came out saying that it’s like T-ball, where everyone is a winner. Everyone gets a trophy, because Donald Trump looks like he lost. But it darkens his financial records again. And meanwhile, it looks like a resounding triumph for the separation of powers and a resounding triumph for checks and balances and oversight. Except that is not going to happen soon. And the reason why I say that everyone is a winner is because John Roberts comes out after having written both opinions as the Chief Justice, the oldest Supreme Justice of all time, and yet nothing changes. This seemed like a victory for the people and for transparency, but it was the court helping once again to cover Trump. This is the court doing exactly what Donald Trump wanted, that time is running out.

“This will create an exception to Bostock that you could drive a truck through.”

Can we talk about the role of religion in the Supreme Court? How did you see the religion reflected in the failures of this term?

We ended the period with a lot of very clear victories over claims of religious practice, including a couple of really important cases about allowing religious schools to fire employees as they please under what was once a very limited doctrine called a ministerial exemption that He said that religious schools could decide for themselves who was a minister for their purposes. If you are a custodian or driving instructor or teach algebra, you are now a minister, and you will remove religious schools from all civil rights laws.

That decision struck me as fascinating because it came only weeks after the Bostock case, which ruled that you cannot fire gay or trans employees because they are gay or trans. And it seemed like two steps forward, one step back, where you have a massive civil rights victory, and then you say: OK, but except for these people around here.

There is no doubt that this will create an exception to Bostock you could drive a truck for. You can say that it is one step forward, two steps back, or you can say that exceptions are beginning to swallow the rule and that what we are seeing is an emptying of civil rights laws in general. Just as the country moves towards a broader, more inclusive and robust sense of who needs to be protected by law, be it women, LGBTQ workers, older workers, we are seeing an equally effective campaign by religious groups to say the court will give them a sword to fight against that.

Is this how it should work when you’re engaged: no one is 100 percent happy? Is there an argument to do that?

I think that is the question. This is without a doubt the most conservative Supreme Court we have had since the New Deal. And yet somehow we came to this rather intermediate term with huge historical victories. We haven’t even talked about DACA’s termination, but that was a massive victory. This is clearly not the conservative term we feared it would come. I think what you’re seeing are partly difficult exchanges, a little horse trading. John Roberts’ long game. But the job of the court is to move slowly and deliberately and not be hit by the winds of any precipitous political moment they find themselves in. And what that means is a good thing, right? We had great victories because the court is slow and deliberate, and great losses, especially in cases of financial documents, because the court does things slowly. But the court is not just thinking about November. The court is the institution that would very much like to be around and have its lights on and its toilets working in 10 years. And the only way to do it is to get the American public to do exactly what the American public is doing this week, which says: Well, I have a lot to worry about, but what I don’t have to worry about is the United States Supreme Court.

It is as clear how conservative the court is that the people they apparently represent.

I think the person who is more aware of that than anyone is John Roberts. Judges are aware of the fact that, in many ways, they are not necessarily in contact with the public. The important thing is to say that 99 percent of cases are decided in the appeals courts, and those courts have radically changed under Donald Trump. I want to be really aware of the fact that what we are seeing play in less than a hundred cases in one court period is in no way representative of what we are seeing in federal courts across the country. That is something we should be looking at, and I’m afraid not.