Preakness Stakes 2018: Will any horse tell Justify, “Here’s mud in your eye?” 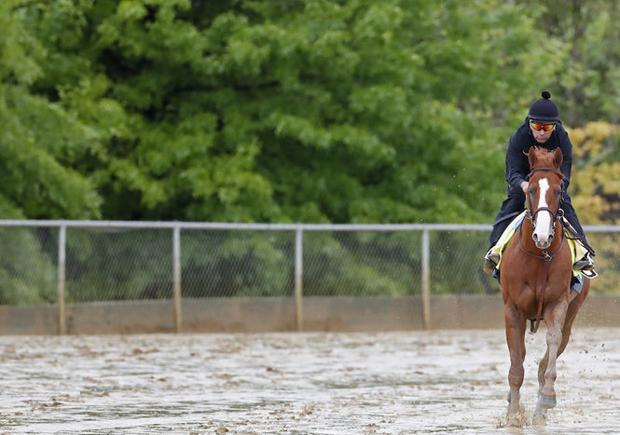 BALTIMORE – It becomes more obvious with every minute that goes by and every blob of water that we only have two options. Either we are experiencing climate change or Pegasus is so angry with the pitiful environment for the Preakness Stakes, the second jewel in the Triple Crown, has moved to a week of tears the size of a golf ball.

Saturday's race could produce the second installment of a possible equine coronation, and they will place it in a union that has all the charm and warmth of an abandoned warehouse, even though about the same distance from the same airport in Laurel , the same administration has a modern race track, where ultimately, the Preakness will happily become a new stage.

But for now, you must deal with what it is. Consequently, unless they are building an ark behind the kitchen of the road, we could see the first race in which each horse is equipped with a set of aquatic fins.

The possibility of slop would normally be enough to cheer the hearts of most coaches by sending their foals to this eight-horse start gate.

The bad news is that it justifies, the intimidating bully of this clbad of 2018, not only is undefeated in all his races, but he has also run twice in the slop and all the other athletes had to prove that they were muddy faces .

Well, on Tuesday, the Baltimore rains did something no horse has yet to do. They stopped Justify dead in its tracks. They had more than a little help from the air traffic controllers at BWI, who shut down the Baltimore airport and the two deputies serving in the vicinity of Washington, D.C.

Justify arrived on Wednesday night. Coach Bob Baffert, his human field marshal who was there to join him, grabbed his reins and took him to 28th place, in the middle of the row of the shed.

"I chose 28 because it's quieter, and we want it to be as quiet as possible," Baffert said.

The impromptu parade around the stable area had a profound effect on the enemy camp. It was best summed up by Lion in Winter from thoroughbred racing, veteran coach D. Wayne Lukas.

This is a guy who has won 14 races of the Triple Crown and is not easily impressed. Yesterday, in the raffle of mail posts, they asked about this race.

"Well, I'll tell you," he said. "Around noon, I felt pretty good." Then Baffert paraded him to the barn and looked at him closely, and I thought, "Oh, boy, we're in a lot of trouble."

John Servis trained Smarty Jones and won this race. He is at the other end of the Preakness spectrum with the longest long shots in Diamond King. There has been enough to know that a horse like Justify scares him.

"He's a good horse, there's no doubt about that," Servis said. "We will discover now if he is a great horse."

But he said it as a man who already knew the answer.

A look at the odds after the draw for mail posts confirmed that notion in capital letters. The Oddsmaker track made it one of the 1-2 favorites.

Only Good Magic in 3-1 was a single-digit election. After that, the odds start at 12-1 in Quip and roll up to as high as 30-1 in Sporting Chance or Diamond King. It may or may not be a competitive race for these horses, but certainly offers a great variety for those who bet.

And beyond all that betting temptation, there's the mud.

Justify has always been close enough that he never found mud on his face. That is an unknown. Another is that in a muddy track everything can happen, and often it does. It's been raining all week and if this Preakness becomes slippery enough to alter the result, generations of unborn riders will remember this nightmare in the words of the old sailor:

"Water, water everywhere and not a drop to drink. "

On Thursday, Baffert looked at the weather (it had spilled again before) and looked at Justify and thought why not? He told her to go out and play, but not for long.

The prediction of Saturday's rain did not seem to bother Baffert at all.

"This track can probably take more water than any other track I've ever seen," he said. "I've seen it dry quickly."

That's what he said.

So, why are they lining up horses two by two and waiting for a guy named Noah?

Jerry Izenberg is a columnist emeritus of The Star-Ledger, he can be reached at [email protected]