Pre-market actions: China boycotts are a warning to Western brands 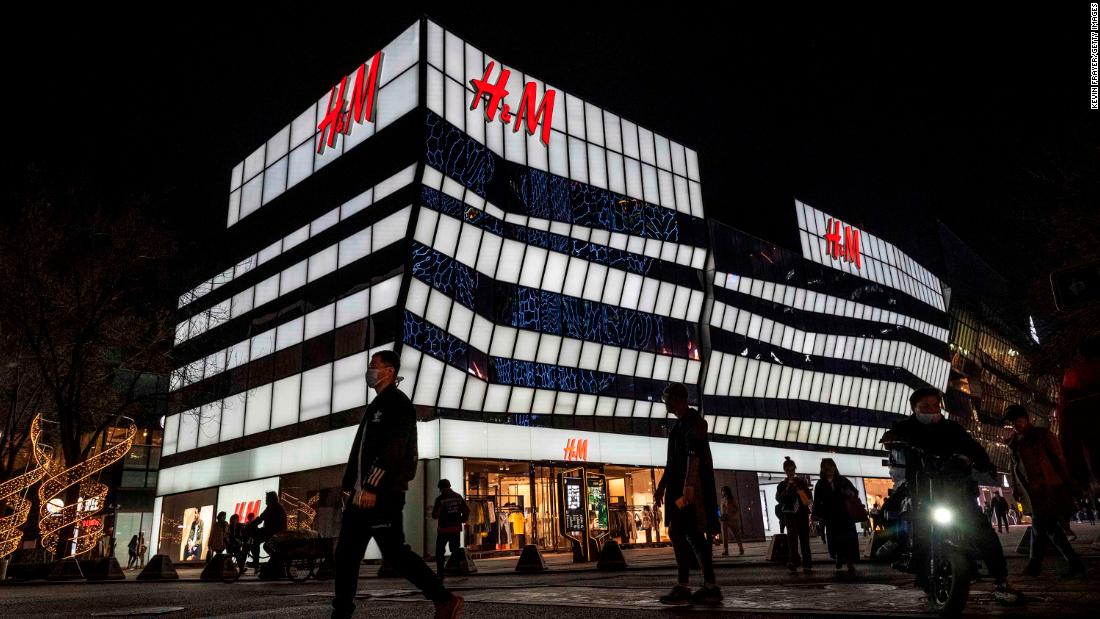 Dozens of Chinese celebrities have terminated contracts or said they will cut ties with brands, while H&M, the world’s second-largest clothing retailer, has been pulled from major e-commerce sites.

The outrage was sparked by a social media post by a group linked to the ruling Communist Party, which resurfaced a statement H&M made in September about reports of forced labor in Xinjiang. Since then, state media have targeted other major brands that have spoken out before.

Human rights groups have repeatedly accused Beijing of detaining Uighurs and other Muslim minority groups in “re-education” camps where they are forced to make products that find their way through global technology and retail supply chains.

Recent sanctions by the United States and other Western countries on Xinjiang have prompted renewed pushback from the Chinese government, which calls the camps “vocational training centers” designed to combat poverty and religious extremism.

The pullback in China against companies that have spoken out on Xinjiang may pass, according to Bernstein analyst Aneesha Sherman. Shares of H&M were up 1% in early trading on Friday, while shares of Nike were up about 1.5% in premarket trading.

But the episode is a reminder of the challenges Western brands face when courting the immense purchasing power of Chinese consumers.

“It’s a tough position to handle, because they can’t really back down from their [stances]but at the same time they want to make sure they don’t abandon the Chinese customer, “Sherman told me.

China accounted for about 5% of H & M’s sales in 2019. Sherman estimates that figure grew to around 10% in 2020, as China’s economy recovered faster from the coronavirus than its local European market.

“In a year like this, even removing a 5% top-line haircut is a huge hit when H&M is trying to come back,” Sherman said.

Luxury brands like Burberry are even more exposed, he added. Burberry listed “any significant change in Chinese consumer spending habits” as a key risk to sales in its most recent annual report.

The Big Picture: The US-China tensions that rose to prominence during the Trump era have not disappeared, with the Biden administration and allies taking a hard line with Beijing. That creates challenges for Western companies operating in the Chinese market.

“It affects these brands,” Sherman said. Furthermore, weeks like this only strengthen the hand of local competitors, who are more attached to regional tastes and can avoid politically generated controversy, he said.

The oil industry’s most powerful lobby group announced Thursday that it will support setting a carbon price for the first time, a significant shift that underscores the intensifying pressure on Washington and business to address the climate crisis.

But the devil will be in the details, reports Matt Egan, my colleague from CNN Business. The American Petroleum Institute established a series of principles that must be met before the centennial group approves a price for carbon.

Proponents of carbon pricing say it is crucial to fighting the climate crisis, as it would accelerate efforts to curb global warming emissions and force investors, businesses and individuals to bear the cost of pollution.

But API opposed the latest serious effort to impose a carbon price in 2010. Since then, ExxonMobil, Chevron and other industry leaders have publicly endorsed the carbon price, clearing the way for others to follow.

“This is a big problem for the industry. There is widespread recognition that obviously the country has to do something about climate change,” API CEO Mike Sommers told CNN Business. “We want to be a willing partner with the Biden administration and others in Congress who are serious about this challenge.”

Still, there is skepticism among climate groups that API’s change of mind will translate into their endorsement of meaningful legislation.

“A theoretical supporting statement for a market-based carbon price is a long way from agreeing with what will likely need to be strong and binding rules to limit the use of fossil fuels. [and] methane emission, “Dylan Tanner, CEO of InfluenceMap, a think tank focused on energy and climate change, said in a statement.

WeWork finally goes public by merging with a SPAC

It’s been 18 months since WeWork scrapped its plans to go public after a disastrous IPO attempt. Now the coworking space provider seems ready to try again.

The Latest: The Wall Street Journal was the first to report that WeWork agreed to merge with a special purpose acquisition company, or SPAC.

The merger with BowX Acquisition Corp. would value WeWork at $ 9 billion. That’s a fraction of the private market valuation of $ 47 billion the company previously obtained.

Remember: WeWork plunged into crisis in 2019 when investors reviewed the company’s IPO paperwork, which revealed the unchecked power of former CEO Adam Neumann and numerous potential conflicts of interest, as well as the startup’s staggering losses.

The company was forced to postpone its IPO, accept a SoftBank bailout, and reconfigure its business.

Now, you could raise money by taking advantage of the SPAC boom. In recent months, investors have been rushing to create so-called “blank check” companies, which exist solely to find private companies to merge with, effectively going public.

Personal income and spending data for February is released at 8:30 am ET, along with a key measure of inflation.

Coming up next week: The March US employment report is a crucial economic indicator as the recovery picks up steam.