Porto – Juventus: Champions League round of 16, first leg, how it happened | Football 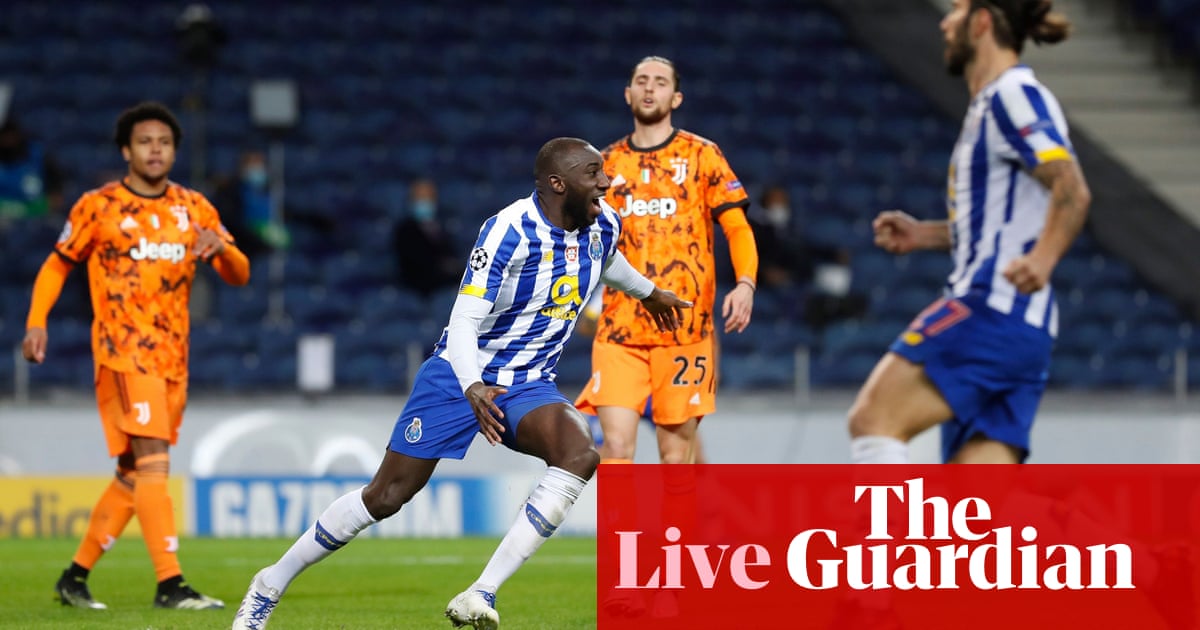 Federico Chiesa speaks: “Our approach was bad and the game became even more difficult for us after that opening goal,” he tells a UEFA reporter. “When you are not fully focused and when you are not doing your best, [teams can] punish you at this level. “

At the final whistle: Several Juventus players surrounded match referee Carlos del Carro and asked him in the strongest terms why he did not give them a penalty for Sanusi’s tackle on Ronaldo at the end of the match. My reading, for what it’s worth, is that Ronaldo was attempting a Cruyff spin in the penalty area, he lost his balance and Sanusi just crashed into him as he fell. Ergo, there is no penalty. However, I would not have been the least bit surprised if it had happened and I am surprised that Mr. Del Carro has not at least looked at his field monitor.

Some post-match reflections: Porto will be delighted with their first win over Juventus … of course they will. However, their enjoyment of the occasion will be tempered by the knowledge that they could and should have won much more. The Italian champions stank at the Estadio do Dragao tonight and were a pale imitation of themselves. They will be enormously relieved to have escaped with just a 2-1 loss and the away goal that came with it on the back of such a dismal performance.

Peep! Peep! Peeeeeeep! Everything has ended in Porto, where the locals have won by the odd goal of three.

90 + 3 min: A late attack from Juventus. Cristiano Ronaldo appealed from a penalty after falling into a pile under a push from Zaido Sanusi as he tried to control a long ball over the top of De Ligt. There is no doubt that it received a push, but it was already sinking when it arrived.

90 + 2 min: Alex Sandro takes one for the team and Mehdi Taremi is missing as the striker swoops into Juve’s penalty area. It’s just a reservation because Matthijs De Ligt was close. From the free kick, Szczesny drops the ball but gets away with it.

90 + 1 min: Porto brings in two more substitutes in an attempt to exhaust the clock, the son of their coach, Francisco, among them.

89 min: There is no bad win against Juventus, but if it stays that way, Porto will be disappointed to have conceded an away goal. The Italian team were so unspeakably bad for most of tonight’s match, they couldn’t have a complaint if they left the Estadio do Dragao on the wrong side of a hideout. As it is, they will consider it a fantastic result. Pirlo’s substitutions saved his team’s bacon.

87 min: Porto is close when Mateus Uribe hits the ball over a Juve defender on Taremi’s chest. Before he can pull the trigger from four or five yards, De Ligt kicks the ball into a corner. Nothing leaves the set.

85 min: Ronaldo throws a cross from the left towards the far post and then gestures angrily to discover that there is no one there to try to head the ball.

Juventus withdraws one. Adrien Rabiot runs behind the Porto defense and shoots the ball back into the penalty area. Federico Chiesa meets him for the first time some 14 meters from the goal, nails the ball into the ground and rolls away in celebration as he bounces and surpasses Marchesin.

81 min: From a Porto corner, Marco Grujic heads into Oliveira’s shot at the far post, but deflects his shot. That was a good opportunity!

79 min: Seeing Marchesin four to five yards from his line, Morata kicks the ball as high as he can towards the goal. It’s a bold effort and the ball falls to the roof of the net, but the goalkeeper had it covered.

77 min: Álvaro Morata plays behind the Porto defense and brings a smart save from Marchesin. I was out of the game.

75 min: Álvaro Morata is appealing a penalty after being dispossessed by Chancel Mbemba, who was ungainly but did not break any laws. The Spanish has to settle for a corner.

73 min: Bentancur slides to deny Uribe the chance to send a cross to Juve’s penalty. From the next corner, Sergio Oliveira’s corner is cleared at the near post.

71 min: Good work from Ronaldo, who gallops down the left flank before drilling a low center towards Chiesa. His shot is stopped by Agustín Marchesin, but the flag is raised. Álvaro Morata was out of the game as he stalked in hopes of pouncing on the soccer-ball-sized, crumbs that fell from Marchesin’s table.

68 min: Entrepreneurial stuff from Jesús Corona, who standing with his back to the Juve goal some 20 meters away, throws the ball into the air to prepare his own acrobatic bike kick. His effort is dumped over the bar by Szczesny but it wouldn’t have counted if he had entered. The referee had detected some infraction or another.

67 min: Porto substitution: Moussa Marega, who scored Porto’s second goal 20 seconds into the second half, goes off shot. He is replaced by Marco Grujic, the Serbian midfielder on loan to Porto from Liverpool.

66 min: Rodrigo Bentancur tries his luck with a long shot. He barely used recoil, but he hit the ball with poison. On the bar, but not for long.

65 min: Morata receives the ball and advances, only to be fouled by Mateus Uribe.

62 min: Matthijs De Ligt is retrospectively booked for a foul he committed early in my inning in the 59th minute. The referee had played an advantage at the time.

57 min: Now Kulusevski is penalized for controlling the ball with his hand and Porto takes advantage of the break in play to make a substitution. Luis Díaz replaces Otavio.

56 min: Dejan Kulusevski has a half chance cut by Merih Demiral and it’s all Juventus have had in the way of a chance so far in this half.

52 min: Sergio Oliveira appears in the penalty area at the other end of the field, landing a clever one-handed save from Wojciech Szczesny, who looked a bit cheated and had to shift his weight from one foot to the other to reach the ball. Perhaps the shot was deflected: Juventus is being hit here.

50 min: Juventus win a corner and the ball is thrown at the near post by Sandro. Sergio Oliveira has made it clear.

48 min: Porto galloped upfield from the kickoff and the ball was retired to Marega in the penalty area from the baseline. His first touch was sublime and took him away from Federico Chiesa before landing a rather tame shot into the corner past Szczesny, who was hit at his near post.

Hell’s Bells! That’s ridiculous, another great start for Porto as Moussa Marega shoves the ball into the corner after 20 seconds into the second half.

46 min: Play red hues with no staff changes on either side. I am surprised that Álvaro Morata was not sent to bat by Pirlo, since Dejan Kusulevski has barely had a kick.

Peep! That’s your thing for the first half, which got off to the worst possible start for Juventus when Mehdi Taremi pounced on a Rodrigo Bentancur mistake to score an opportunistic goal. Juve have been surprisingly slow and already look genuinely devoid of ideas. I suspect we will see a change or two from Andrea Pirlo in no time. It has been very comfortable for Porto, whose defense has been very confident.

45 + 1 min: Ronaldo tries to run into Porto’s penalty area from the left, but is intercepted by the ball.

45 min: Ronaldo wins his team a corner after one of those excursions. Bentancur’s delivery is heading clear, despite Ronaldo’s best efforts to get to the ball.

44 min: We are almost at half-time and Cristiano Ronaldo has only had one touch in the Porto penalty area. He’s getting frustrated too, dropping deeper and deeper in an attempt to get more time on the ball.

41 min: Another free kick, from the same area. The ball is sent back towards the far post and it breaks Adrien Rabiot, whose kick from above is saved by Marchesin, who clears it. It was a spectacular-looking endeavor, but it lacked real venom. It was also Juve’s first shot on goal.

40 min: Juve free kick, deflected to the right after a foul by Sergio Oliveira on Matthijs De Ligt. Bentancur finally gets it right and takes out Cristiano Ronaldo at the far post. His head butt down doesn’t bother Marchesin.