Pope on audience: Hymns love God and love their children 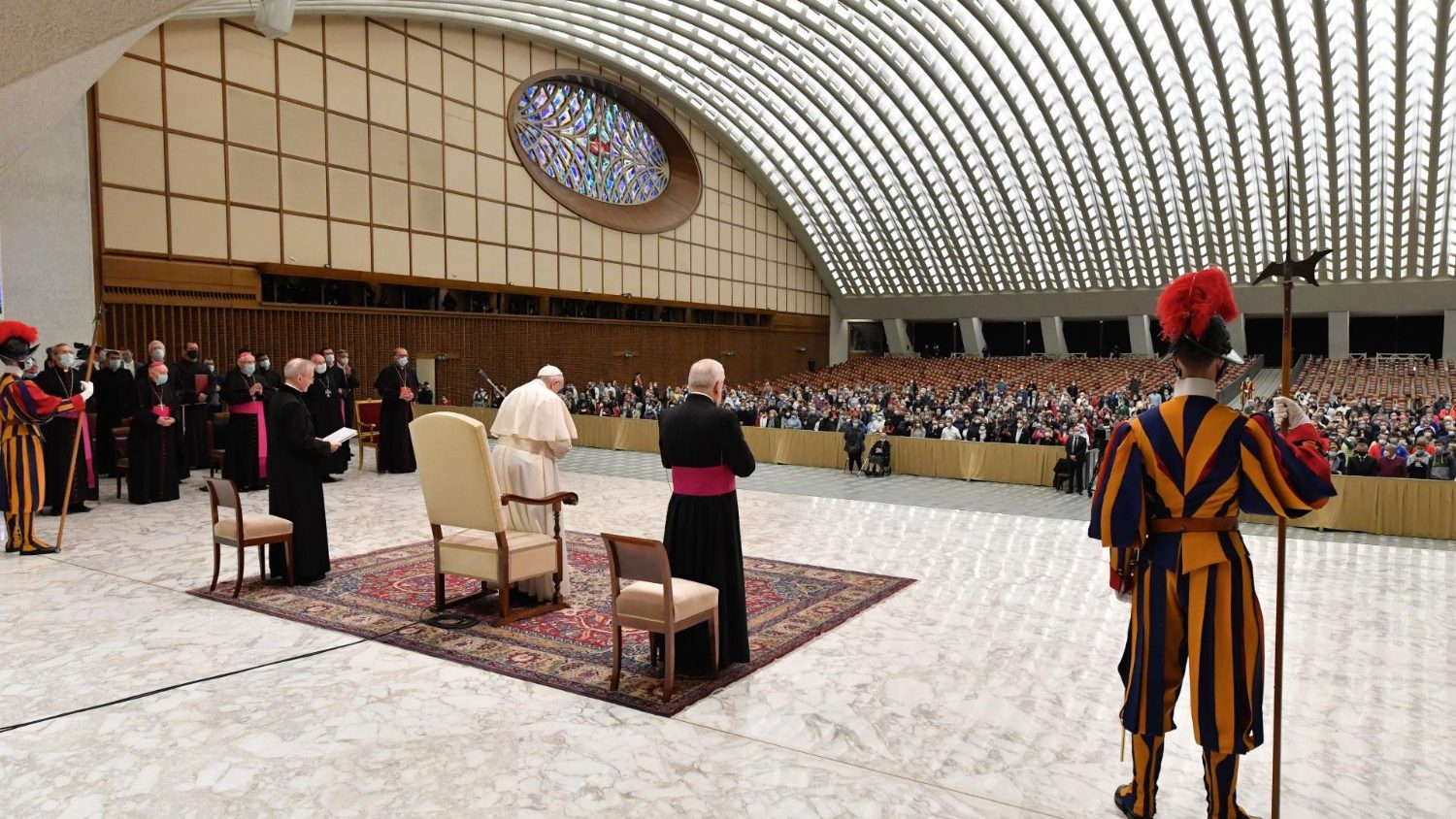 In his general audience on Wednesday, Pope Francis concludes his reflection on hymns in a series of catechesis on prayer. He says that the hymns allow us to “contemplate reality with the eyes of God”.

By staff writer of Vatican News

On Wednesday, Pope Francis introduced the General, noting the increasing number of Kovid-19 infections worldwide, including Italy. Even if he wants to get closer to the audience, he cannot do so because of the threat of contagion for all. “I’m sorry for doing this, but it’s for your safety,” he said. So instead of shaking hands, he suggested to the attendees to greet each other at a distance, but assured that they were close to his heart.

The pope said that his attention was caught during the reading of the passage of the Bible at the beginning of catechesis by a mother in the crowd who was calling her weeping child. He said, “This God is with us, like that mother.” These beautiful images of the tenderness of a mother, the Pope said, are images of the Church, symbolizing God’s tenderness for us. Therefore, he said, “He said.” Never silence a crying child in church, because it is the voice that attracts the tenderness of God. “

Pope Francis started the second and final catechism on Psalms in his series after prayer. The hymn, they say, “help us not to fall into the temptation of ‘the wicked’, that is, to live, and perhaps even pray, as if God does not exist, and as such the poor do not exist”.

Seeing reality through the eyes of god

Instead, the Pope points out, Psalm prayer is a fundamental reality of life, because the context of the absolute, parlokic, what the spiritual master calls “the holy fear of God” makes us fully human. Prayer, they say, prevents us from venturing into life “in a predatory and sinister way.”

However, the Pope warns against “false prayers” that ask for praise from others or to show the latest fashion, which Jesus believes against himself. Instead, the true spirit of prayer in the heart “allows us to contemplate reality through God’s eyes”.

The Pope also warns against tiring and rote prayers like a parrot. Rather, prayer should be the center of life, from the heart. He says, “If a prayer happens, even a brother, a sister, even an enemy becomes important,” he says, “Those who believe in God, Love your children. People who respect God, they respect humans. “

Prayer, the Holy Father continued, should not be considered as a “sedative reducing life’s worries”, which is not a Christian form of prayer. “Rather, prayer makes each of us responsible,” as we see in “Our Father” that Jesus taught his disciples.

Prayer holds the temple and the world together

The psalmist, the pope notes, often “unfolds the mark of existence.” Yet these prayers, even the most intimate and personal, were used first in the temple, and then in the synagogues. Catholic Church It states that the hymn “takes shape in both the temple’s leela and the human heart” (n. 2588). Thus, personal prayer is “nourished first by the prayers of the people of Israel, then by the prayers of the Church.”

The Pope says, “Even in the first person singular, the hymn” is a “collective patience,” praying for everyone and for all. There is “breath” and spiritual tension in the Christian’s prayer. “To keep the temple and the world together”.

“Prayer,” Pope Francis explains, “may begin in the column of a church cave, but may end in the streets of the city.” “And on the contrary, it can blossom during daytime activities and reach its fullness in litigation.” Thus, they say, the doors of the church let everyone’s groans.

Therefore, the Pope is under stress, the world is always present in the prayer of hymns. They assure the divine word of salvation for the most vulnerable, warn against the danger of worldly riches or open the horizon to God’s vision of history.

Love of god and neighbor

“In short,” the Pope says, “where God is, the human person must also be there.” This is not because “we love, but because he loved us for the first time”. Pope Francis quotes 1 John who says “If anyone claims that he loves God and hates his brother, then he is a liar, because if someone does not love his brother whom he has Seen or not, then he cannot love God whom he has not seen. ”

The pope further states that God does not support the “atheism” of those who replicate the divine image that is “inscribed in every human being.” Believing God while driving away and hating others, the Pope said, is practical atheism. “It is a sacrament, an abomination, the worst crime that can be directed towards the temple and the altar.”

Pope Francis concludes his quotations by saying that the hymns prevent us from “falling into temptation to live, and perhaps pray, as if God does not exist, and as if the poor do not exist”.