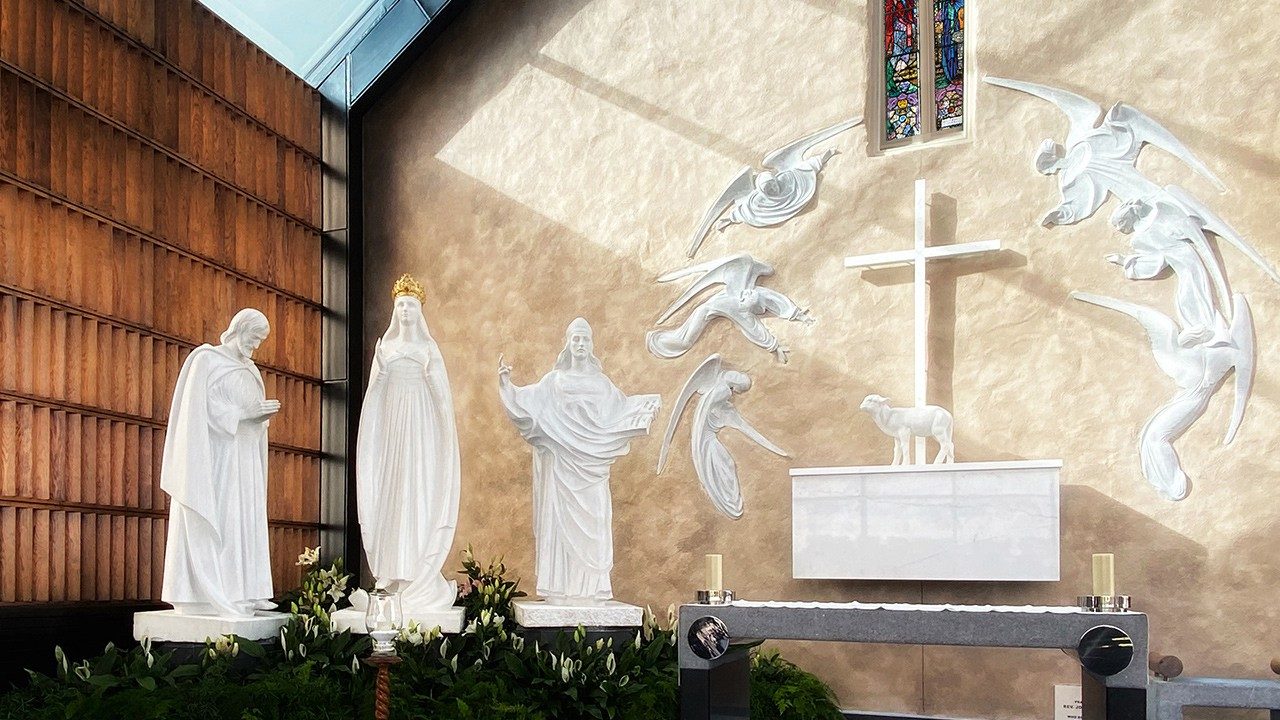 The Pope on Friday night will deliver a special message via video link recognizing Knock Shrine as an International Marian and Eucharistic Shrine.

The message will be conveyed during the Mass to be celebrated by the Archbishop of Tuam, Michael Neary, and concelebrated by Father Richard Gibbons, pastor and rector of the Knock Shrine.

This honor comes almost two and a half years after Pope Francis visited the Marian Shrine, located in the west of Ireland, during his Apostolic Visit to the country for the World Meeting of Families.

While there, he prayed in front of the Apparition Chapel for all the families of the world, and presented the Shrine dedicated to Our Lady of Knock with a golden rosary in recognition of the family rosary tradition in Ireland.

The story of the apparition is deeply symbolic and unique, with the representation of the Eucharist as the risen Lord appearing as the Lamb on the altar, standing before His Cross and surrounded by a multitude of angels.

On August 21, 1879, fifteen people in the town of Knock stood for two hours in the pouring rain praying the Rosary before the Apparition scene, which also featured Our Lady, Saint Joseph, and Saint John the Evangelist.

Speaking before the Eucharistic celebration on Friday, Father Richard Gibbons said he was “thrilled and delighted” with this recognition. “It is a great honor to be recognized in this way and what it means is, I suppose we have the ultimate in terms of recognition from the Church.”

This special status is also being celebrated by the parishioners of the Shining, who have expressed their gratitude to Pope Francis for honoring this place of Marian pilgrimage in this way.

Listen to the interview with Fr. Gibbons

The National Shrine of Ireland is being honored on the feast of Saint Joseph and on the day that Pope Francis celebrates the eighthth anniversary of his inauguration as pope, which Fr. Gibbons said, made it even more significant. He also noted that Pope Francis, visiting this pilgrimage site in 2018, understood “what the Shrine means to the Irish people and also the importance of the message.”

Our Lady of Knock

In addition to the Apostolic Visit, the Marian Shrine of Knock participated in the inaugural Mass of the “Sunday of the Word of God” presided over by Pope Francis in Saint Peter’s Basilica in January 2020.

During the Eucharistic celebration, a new pilgrim statue of Our Lady of Knock was displayed on the Papal Altar, which was commissioned to celebrate the 140th anniversary of the apparition at Knock in 1879.

The statue was blessed by the Pope in Rome in 2019 after his visit to Ireland.

When asked if he expected to see more interest in the Shrine from abroad given its new international status, Fr. Gibbons said he has received messages from people around the world saying that when they are allowed to travel they plan to come to Knock.

Knock Shrine in the middle of the pandemic

Ireland today continues to adhere to level 5 lockdown restrictions, which means the masses are still in line. Speaking about how Knock Shrine has led the way during this pandemic, the Rector highlighted, in particular, one such celebration in November last year, which remembered everyone who died from COVID-19 on the island of Ireland. “In the Basilica, we had 3,000 candles, one for each person who had died, and more than 120,000 people joined us for that mass online,” he said.

As the Shrine was recognized with this special status, Fr. Gibbons emphasized that it will help this place of Marian pilgrimage to “look to the future full of hope”.

The Triduum will be broadcast live on the Knock Shrine website www.knockshrine.ie, and on Facebook @knockshrine on Friday, March 19 at 7:30 pm; Saturday March 20, at 7.30 pm; and concluding on Sunday, March 21 at 12 noon.