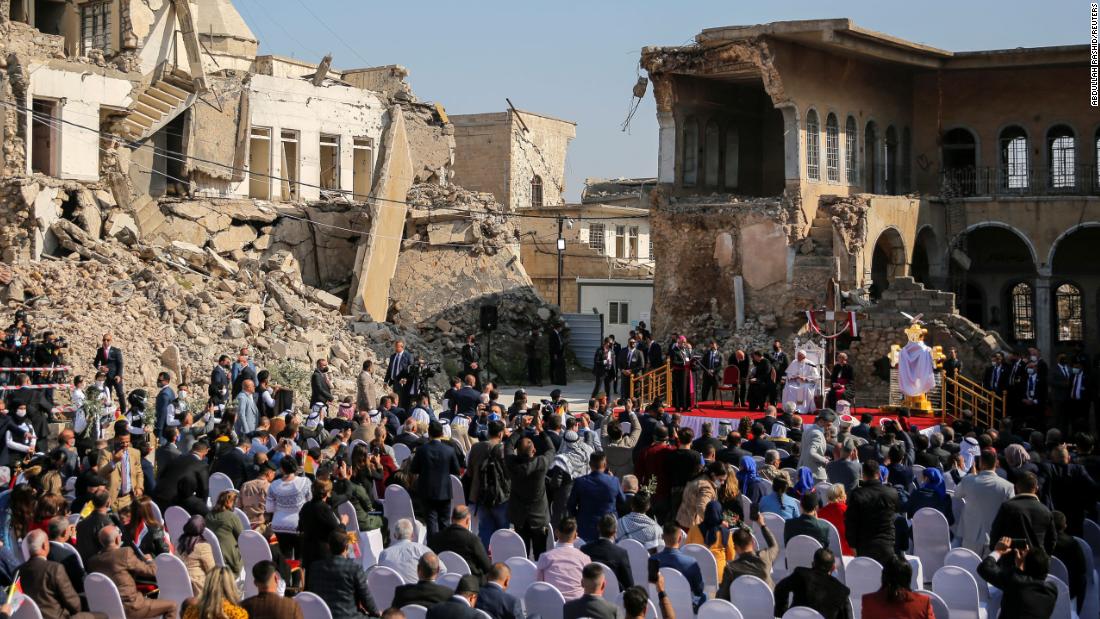 Francis called for a “harmonious coexistence” of people of different origins and cultures as he led a prayer in a square overlooking the ruins of the Syro-Catholic Church in Mosul’s Old City. Once a stronghold of ISIS, the entire city was completely destroyed in 2017, during the nine-month battle for its control.

“Here in Mosul, the tragic consequences of war and hostility are all too apparent,” Francis said. “How cruel it is that this country, the cradle of civilization, has been hit by such a barbarous coup, with former places of worship destroyed and thousands of people – Muslims, Christians, Yazidis and others – forcibly displaced or killed!”

Thousands of people were killed during the battle to take back Mosul from ISIS, which controlled the city between 2014 and 2017.

The visit to Mosul came on the third day of the Pope’s tour of the war-torn nation, the first papal visit to Iraq and Francis’ first trip outside of Italy since the coronavirus pandemic began. He has repeatedly denounced religious extremism and called for interreligious friendship during the trip.

After leaving Mosul, Francis traveled to Qaraqosh, the largest Christian city in Iraq. Like Mosul, Qaraqosh was also controlled by the ISIS terror group for more than two years.

The Pope visited the city’s Church of the Immaculate Conception, where he delivered a speech and led a prayer. He was greeted by thousands of people there, a marked difference from his visits to other parts of Iraq. The government has imposed a total curfew during the four-day papal visit to minimize health and safety risks.

Late on Sunday, the pope was scheduled to celebrate a mass at the Franso Hariri stadium in Erbil, according to Iraqi state television Iraqiya. Some 8,000 people have gathered at the stadium to greet the Pope there, security officials told CNN. The plan had been to have the 35,000-seat stadium at 50% capacity with an empty seat between each of the attendees to allow for social distancing, according to officials. However, the stadium footage showed stripes of the stadium bleachers filled with people sitting close together without social distancing.

The pope is believed to have long wanted to go to Iraq, which is largely in the Old Testament and whose dwindling Christian minority has suffered greatly from the country’s long cycles of violence.

Considered one of the oldest Christian communities in the world, before the 2003 US invasion, there were 1.5 million Christians in Iraq. About 80% of them have since fled, according to top Christian clergy there.

He landed in Baghdad on Friday, where he was received by Iraqi Prime Minister Mustafa al-Kadhimi. Later, Francis met with clergy and other officials at a Baghdad church that was the site of a bloody massacre in 2010.

On Saturday, the pope held a historic meeting with revered Shiite Muslim cleric Grand Ayatollah Ali al-Sistani in the holy city of Najaf before visiting Ur, the ancient Iraqi city where Jews, Christians and Muslims believe their common patriarch Abraham was born.

Francis then returned to Baghdad on Saturday afternoon and celebrated Mass at the Chaldean Cathedral of St. Joseph. He is scheduled to leave Iraq on Monday.