Pope: crucifix our compass and hope in life 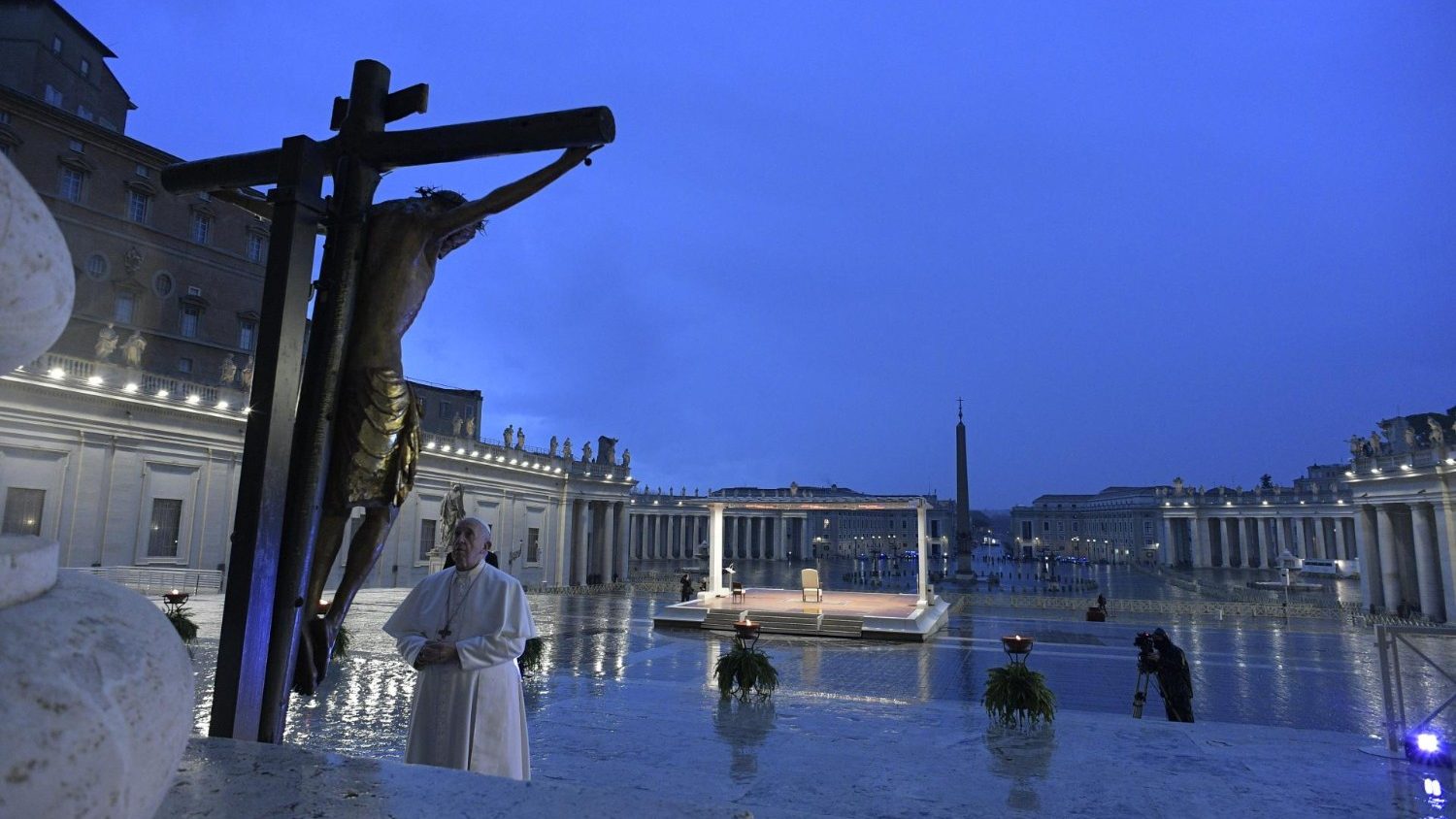 “Why are you afraid? Have you no faith? Is the title of a new book from the Vatican Dicastery for Communication. It contains images and texts that recall the gestures and words of Francis in the extraordinary service of prayer and blessing” Urbi et Orbi “under the coronavirus shutdown on March 27 of last year.

“I walked like this, alone, thinking of the loneliness of so many people … an inclusive thought, a thought with the head and the heart, together.” These are the words of Pope Francis in the book that recalls the extraordinary moment of prayer that he celebrated on the night of March 27 of last year in a desolate and rain-bathed Saint Peter’s Square, pleading that humanity be saved from the clutches of the deadly coronavirus. The event broadcast live was followed by crowds from around the world.

The book, “Why are you afraid? Have no faith? “It is a brief interview with the Pope by Monsignor Lucio Adrián Ruiz, secretary of the Dicastery for Communication, in which the Holy Father relives that memorable event through photographs. The title of the book, taken from the Gospel of Mark (Mk 4:40), is the words of Jesus to his terrified disciples who wake him from sleep in the boat that dives into the rough sea. The Vatican Publishing House (LEV) will make the book available to the public on December 17, when the Pope turns 85.

The first part of the book includes the Pope’s passionate and powerful plea to God for humanity at the March 27 event. The second part contains the development of this reflection in the light of the Gospel and the social doctrine of the Church that emerged in the months after that event. Encourage people to make the pandemic an opportunity to rethink the meaning of life and existence, come out better and not worse, and allow themselves to be questioned and converted.

All in the same boat

“Two things came to mind: the empty square, the people united in the distance, … and on this side, the migrant ship, that monument …”, the Pope recalls in his interview. the ship, and in this ship, we do not know how many will be able to disembark … A whole drama in front of the ship, the plague, the loneliness … in silence … “, the Pope comments, emphasizing that he did not feel alone but contact with people at that time.

A particularly moving moment on that night of March 27 came when, after a moment of silent prayer in front of the soaked crucifix, he kissed the feet of Jesus. “Kissing the feet of the Crucifix”, says the Pope, “always gives hope”. Jesus “knows what it means to walk and he knows quarantine because there they put two nails to hold him down.” “The feet of Jesus are a compass in people’s lives, when they walk and when they stop. The feet of the Lord touch me a lot … ”, adds the Pope. Apart from the crucifix in that deserted square there was also the image of María Salus Populi Romani (Mary the health of the Roman people). The prayer service was a kind of stop in the time when Christians around the world were glued to the event in St. Peter’s Square, to invoke God’s mercy and rethink life in a personal and global way.

The two deeply linked parts of the book on prayer and teaching also provide QR code links to a rich variety of Vatican media content.

In the same vein as the Pope’s message for World Communications Day 2020, the Dicastery for Communication’s book also encourages the art of telling and sharing constructive stories that make us realize that we are all brothers and sisters, part of a story that goes beyond ourselves. The objective is not only to recreate a past event, but to propose a memory that is made flesh today to bear fruit.

At the conclusion of the first part, Monsignor Ruiz explains that the March 27 event was “a celebration that reflects history,” because it presents the human drama to the God of mercy. It is also history because God’s response is his presence in the midst of his people. “The present moment”, explains the secretary of the Dicastery, “is not only marked by this virus, but is fundamentally sealed by the presence of God”, which must be remembered and narrated so that it remains fixed in the memory and is part of the “great story of God’s way with humanity.”

The second part includes several interventions by the Pope in the months following the prayer service on March 27, urging a change of direction and leading to the Pope’s latest encyclical. Fratelli tutti, which also includes passages related to the global pandemic.

In this sense, the Pope has delivered a new cycle of catechesis on the healing of the world during his weekly general audience from August 5 to September 30, 2020. These reflections on the transformation of the roots of our physical, spiritual and social illnesses They addressed issues such as the common good, the preferential option for the poor, the care of the common home and subsidiarity. Focusing on Christ is essential, remembering that no one is saved alone, since the pandemic has made it manifest in a concrete way.