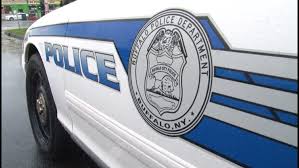 Buffalo police suspended an unpaid lieutenant on Monday night and launched an Internal Affairs investigation into an incident captured on video on Sunday in which he called a woman a vile name when he questioned why 10 officers were called in to try. with a man who seemed drugged by drugs. .

Police Commissioner Byron Lockwood responded by ordering an investigation by the department’s Internal Affairs unit, and then suspended DeLong. Lockwood was responding to the wide circulation of the video, filmed by Salim on his phone outside a 7 Eleven store on Prospect Avenue near D’Youville College on the city’s West Side.

Salim pulled out his phone to film several police officers looking for a man outside the convenience store, he wrote on Instagram. The lieutenant is seen on camera talking to her.

“It is not necessary that all these police officers handle someone who is drugged,” said Salim in one of the videos published on Twitter and Instagram.

In the video, Salim, a community organizer who has worked with PUSH Buffalo and the Western New York Peace Center, continues to wonder why there are 10 officers on the scene, and that’s when DeLong responds with the derogatory name.

DeLong knew Salim was recording it when he asked him where he worked and then he replied, “I’m going to go to your job and start filming you.”

“Why is it okay for me to be demoted?” Salim posted on it Instagram account, who has six videos of his meeting with DeLong.

Section 2.13 of the Police Department rules and regulatory states:

“Employees must carry out their duties efficiently, courteously and orderly, with patience and good judgment at all times. They will be courteous and considerate of the public, their superior officers, and their coworkers. They must not use harsh, profane, or insolent language. They will be discreet in their duties and are expected to exercise the utmost patience and discretion even in the most difficult circumstances. “

City payroll records show that DeLong joined the police force in 2000 and received $ 116,878 for the last fiscal year. Records indicate that he lives in Hamburg. It is assigned to District B, whose campus house is located on Main Street in the Theater District.

DeLong did not attempt to hide his name tag or insignia during his interaction with Salim. That contrasts with officers stationed outside Mayor Bryron Brown’s home last Wednesday. Brown fled when about 70 protesters approached her home and spent the night at a downtown hotel.

All but one of the officers who responded to that incident removed their names from their vests. Protesters have complained that this is an ongoing problem in protests in recent weeks.

In addition, the department’s rules and regulations state: “Members must give their name and credential number to anyone who requests such information.”

In recent protests, including that of the mayor’s house, Investigative Post journalists observed police officers not displaying their name badges and labels and ignoring people who requested that information.

DeLong is the third Buffalo Police officer to be suspended by the department in the past month.

Officers Robert McCabe and Aaron Torgalski, members of the now-dismantled police department’s emergency response team, were suspended without pay on June 4, hours after they were caught on video pushing protester Martin Gugino, who fell to the ground and He hit his head. He remains hospitalized. McCabe and Torgalski have subsequently been accused of serious assault.

However, both officers will be paid again next week. Under New York State Civil Service Law section 75, the suspension without payment cannot exceed 30 days pending the result of an investigation of incompetence or misconduct.

Two other officers, Ronald Ammerman and Michael Scheu, were recorded on May 10 in a violent fight with a motorist, Quentin Suttles. Ammerman can be seen hitting Suttles on the head multiple times while Scheu searches his pockets. Suttles suffered a broken shoulder blade and an eye socket.

Suttles Lawyer filed a claim notice, a forerunner of a lawsuit, against the city and the police department last week alleging racial discrimination and excessive use of force. The protesters have demanded the suspension and prosecution of the officers, but both remain on the job pending multiple investigations.