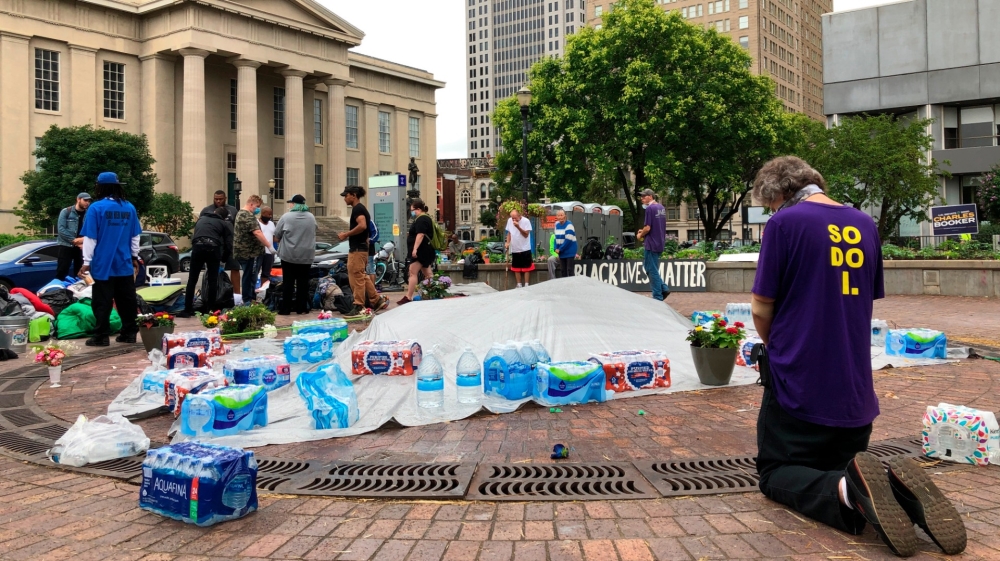 The man who was shot dead in a protest against the police murder of Breonna Taylor in Kentucky was identified as an avid photographer who had been a strong advocate of anti-racist protests in the US state.

Police said Tyler Charles Gerth, 27, of Louisville, died Saturday night after being shot in Jefferson Square Park in downtown Louisville. A suspect, who has not yet been publicly identified, has been taken into custody, they said.

The Courier Journal reported that Gerth was a budding photographer and a University of Kentucky graduate who documented the weeks of Louisville racial justice protests on his Instagram account.

“Tyler was incredibly kind, tender and generous, with deep convictions and faith,” his family said in a statement, reported by the newspaper. “It was this sense of justice that led Tyler to be part of the peaceful protests advocating the destruction of systemic racism within our society’s systems. This, combined with his passion for photography led to a strong need within of him being there, documenting the movement, capturing and communicating the messages of peace and justice. ”

Homicide investigators were interviewing the suspect, who had been hospitalized after the shooting, Louisville Acting Police Chief Robert Schroeder said at a press conference on Sunday.

In a video of the shooting shown during the press conference, the suspect was surrounded by several people before they were shot and people rushed to cover. Schroeder said the man had been participating in the protests since they started and that he had been arrested multiple times.

“Other members of the park had repeatedly asked him to leave because of his destructive behavior,” said Schroeder.

Another video posted on social media later showed at least one person bleeding profusely on the ground.

Several other people fired after the suspect started shooting, but no one else was hit, Fischer said.

“Whether they were there at the time of the shooting or not, I know the sadness of those who have been organizing and participating in peaceful protests for racial justice. This is absolutely not what they wanted or any of us wanted,” said Fischer. “We cannot allow a senseless act by an individual to derail that dream, that vision that we have as a city.”

The shooting was at least the second during nearly a month of protests in Louisville over Taylor’s death.

Seven people were injured on May 28 when the gunfire erupted near the town hall, prompting Taylor’s mother to issue a statement calling on people to demand justice “without hurting themselves.”

Taylor, a 26-year-old black woman, was killed at her Louisville home in March by police who were following a no-touch order. Protesters have been asking that the officers involved in her death be charged. One of the officers was recently fired.

Taylor’s boyfriend, Kenneth Walker, was originally charged with attempted murder after shooting one of the officers who entered the home. Walker has said he thought he was defending himself against an intruder.

The no-touch search warrant that allows police entry without announcing their presence was recently banned by the Louisville Metro Council.

Several dozen people gathered Sunday at Jefferson Square Park, which has been the epicenter of continued protests. Some Louisville police officers arrived to pass out flyers saying camping and cooking overnight were prohibited on the site, but protesters would be allowed to continue meeting during the day.

John Kriner knelt for almost 30 minutes at the site to pray for peace. He said it was his first visit.

“I just want there to be peace and quiet,” Kriner told The Associated Press news agency.