The trial of Mourada T., charged with participation in the Islamic State, was launched 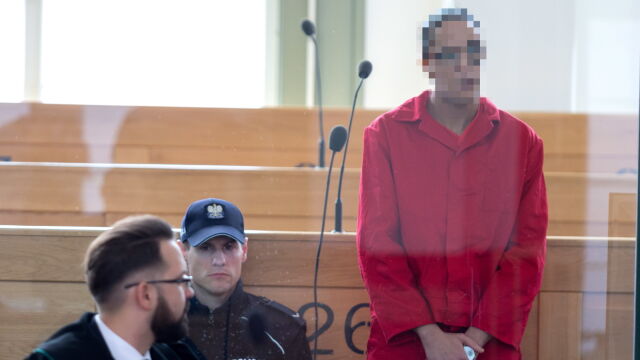 He was born in Casablanca, he was detained in Rybnik, he is accused of terrorism and participation in an international terrorist organization – Islamic State. He only admits to having drugs and using fake data. Today, the Moroccan Mourada T. trial has begun in Katowice.

Mourad T. sat on the bench today in the court district courthouse at ul. Koszarowa in Katowice.

This hall is a fortress. The defendants' bench is located behind the over four-meter-long, armored glass topped with a metal mesh. The accused are isolated from the rest of the room present on each side, also from their defenders, whom they contact by phone. The bench is attached to the floor, and the metal hoops attached to it are fastened to the accused

. Sala – former police cinema – is located in the police barracks. It is so protected that it is difficult to interrupt the process with a false bomb alarm.

In the room at Koszarowa, among others, there was a gang of Janusz T., nickname "Krakowiak"; Ryszard Niemczyk, pseudonym "Rzeźnik" and Katarzyna W. from Sosnowiec, convicted for killing his daughter Magda and parents beaten to death by Szymon z Będzin

"He served as a scout"

Accusation against Mourad T, arrested by the Internal Security Agency ., suspected of terrorism and participation in an international terrorist organization – Islamic State, was sent to the Katowice Regional Court in mid February.

A secret investigation into Moroccan Mourada T. was made in September 2016 – then he was arrested in Poland and the act the accusations were sent to the court in mid-February 2018. T. allegation of participation in an organized criminal union of an armed character – an international terrorist organization, referred to as Islamic State (ISIS, Daesh).

According to investigators, T. served as a scout for Abdelhamid Abbaoud suspected of organizing attacks in Paris on November 13, 2015, and for organizing on the THALYS train between Amsterdam and Paris

Abbaoud was killed in Saint Denis

Abbaoud was killed by the French police in an ambush in Saint Denis on November 18, 2015. Abbaoud has repeatedly appeared in ISIS propaganda, he was supposed to send fighters and scouts to Western European countries and young Muslims for military training in Syria. These trainings were to be combined with religious indoctrination.

Mourad T. was to collect and transmit to Abbaoud information from the route he traveled around Europe. Since the arrest by the Delegation of the Internal Security Agency in Katowice, he was kept in custody, systematically extended by the court at the request of the ABW investigating department of the Department of Organized Crime and Corruption of the National Public Prosecutor's Office in Katowice.

As spokesperson of the minister of special services coordinator Stanisław Żaryn , this is one of the first cases in Poland ended with an indictment and bringing to court a person cooperating with such an important representative of the Islamic State.

– The proceedings in this case were very difficult evidence – the investigators carried out activities in many European Union countries. While collecting evidence, the findings of the judicial bodies of the EU countries regarding ISIS activities were also used – said Żaryn confirming the indictment.

Do not admit terrorism

After prosecutor Paweł Leks read the indictment, the court began receiving explanations from the Moroccan. The accused declared that he did not admit participating in an organized criminal union of an armed character – an international terrorist organization known as Islamic State (ISIS).

He does not question the other allegations regarding possession and transportation of drugs and extortion of falsehood in documents, which enabled him to move around Europe.

The accused has not decided to put forward any further explanations before the court. The court read the protocols of his interrogation during the investigation, which he would later refer to. The dissertation takes place with the participation of an Arabic translator.