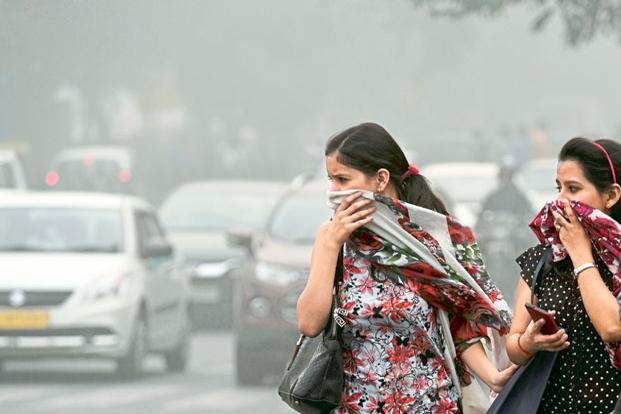 The Lancet study says annual average of PM2.5 concentrations in India are 59g/m³ with a maximum measurement of 176g/m³ in Gwalior while according to WHO it should not exceed 10g/m. Photo: Hindustan Times

New Delhi: More than half a million Indians are estimated to have died prematurely in 2015 due to particulate matter (PM) 2.5 air pollution, according to a new Lancet report that highlights the significant public health risks from climate change.

The medical journal said that the world has seen a 46% increase in weather-related disasters since 2000, contributing to $129 billion in economic losses in 2016.

The study, published on Monday, was authored by leading doctors, academics and policy professionals from 24 organizations across the world.

It estimated an average of 5.3% fall in productivity for rural labour globally since 2000 as a result of rising temperatures.

The study estimated 1.9 million deaths across 21 Asian countries in 2015 that could be attributed to PM2.5 air pollution from sources like coal power plants, transport, household pollution, waste, shipping, agriculture and others.

As per the report, the annual average of PM2.5 concentrations in India are 59g/m³ with a maximum measurement of 176g/m³ in Gwalior while according to the World Health Organisation (WHO) it should not exceed 10g/m.

PM2.5 (particulate matters less than 2.5 micron) is one of the deadliest components of air pollution. It is a fine particle that can settle deep in the lungs and be absorbed in the bloodstream, which can lead to respiratory problems, cardiovascular diseases and lung cancer.

It said that between 2000 and 2016, the number of people exposed to heatwaves has increased by approximately 125 million, with a record 175 million people exposed in 2015.

However, it is not Asia alone that faces high air pollution—the report revealed that “87% of random sample of global cities are in breach of WHO air pollution guidelines, meaning billions of people worldwide are exposed to unsafe levels of fine particulate matter (PM2.5)”.

“This is significantly higher than previously thought. Global exposure to PM2.5 air pollution has also increased by 11.2% since 1990,” the study added.

It highlighted “undernutrition as the largest health impact of climate change in the 21st century” and noted a 6% decline in global wheat yields and 10% fall in rice yields for each additional one degree Celsius rise in global temperature.

The report warned that the incidence of dengue could rise with climate change and noted that there is a “striking increase of 3% and 5.9% in the vectorial capacity for the transmission of dengue due to climate trends, by just two types of mosquito since 1990.”

“With 50 to 100 million infections of dengue estimated to occur each year, this will exacerbate the spread of the world’s most rapidly expanding disease,” it said.

“Climate change is happening and it’s a health issue today for millions worldwide. We need urgent action to cut greenhouse gas emissions. The health and economic benefits on offer are huge. The cost of inaction will be counted in preventable loss of life, on a large scale,” said professor Anthony Costello, a director at the WHO, in a statement.

The report observed that climate change is affecting the health of all populations and that these impacts are disproportionately felt by communities least responsible for climate change and those who are the most vulnerable in society.

It noted that there is no room for complacency and stated unavoidable increases in global temperature and the role of climate change as a threat multiplier and an accelerant of instability means many of the trends are expected to significantly worsen.

“We are only just beginning to feel the impacts of climate change. Any small amount of resilience we may take for granted today will be stretched to breaking point sooner than we may imagine. We cannot simply adapt our way out of this, but need to treat both the cause and the symptoms of climate change,” said professor Hugh Montgomery, director of the Institute for Human Health and Performance, University College, London.

The report also warned that unless necessary action is taken, over one billion people globally will be faced with a need to migrate within 90 years due to a rise in sea levels caused by ice-shelf collapse.