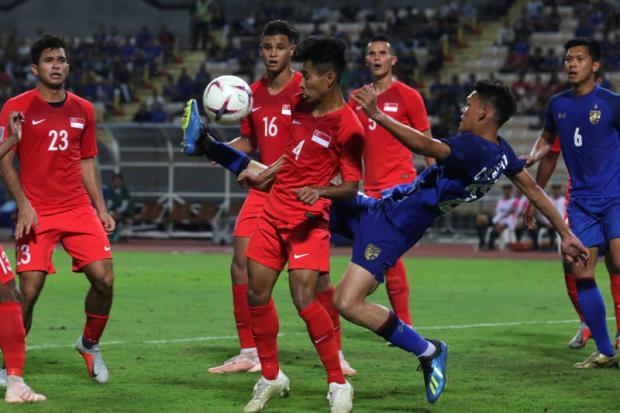 Supachai Chaided from Thailand, second on the right, in action against Singapore at the Rajamangala National Stadium. (Photo by Wichan Charoenkiatpakul)

Thailand coach Milovan Rajevac and his players insist that the War Elephants are not afraid to play in a hostile environment at the Bukit Jalil stadium when the defending champions face Malaysia in the semi-finals of the AFF Suzuki Cup on Saturday.

Thailand overtook Group B after beating Singapore 3-0 at Rajamangala National Stadium on Sunday to set up a two-leg semi-final clash with Group A runners-up Malaysia.

In the last four games, the Group A champions, Vietnam, face the Group B runners-up in the Philippines.

An own goal by Irfan Fandi, who will join the Thailand Bangkok Glassball team next season, and an attack by teen star Supachai Chaided gave Thailand a 2-0 halftime lead.

Adisak Kraisorn put the game beyond any doubt with his eighth goal of the campaign in the final moments.

With the goal, Adisak has become Thailand's top scorer in an ASEAN championship, surpassing Natipong Sritong-In's seven goals in 1996.

Supachai, the 19-year-old forward of Buriram United, champion of the Thai League 1 who scored two goals in the 2018 edition of the Southeast Asian championship, was named the man of the match.

It is likely that more than 80,000 enthusiastic Malaysian fans packed the Bukit Jalil stadium in Kuala Lumpur, but Rajevac played down the concern that the electrifying atmosphere could intimidate his players.

The second leg in Bangkok will take place on December 5 at the Rajamangala National Stadium.

"It's not a concern at all because professional players have to be able to achieve a good performance, whether they're playing against 100,000 people or just a few hundred," Rajevac said.

"We are playing two games and if we prepare well and act as we planned, everything should be fine for us."

The Serbian coach hailed the influence of Supachai.

"It's great to have such a young player with such a great talent, especially with the ability to score goals because we know that in Thailand, most of the players in attacking positions are foreigners," Rajevac said.

"It's very important to have national players and produce players capable of scoring." [Supachai’s nickname] He is really doing a great job and has a very bright future ahead. "

Supachai said he did not mind the possibility of playing in Bukit Jalil.

"I do not feel nervous about that," Supachai said. "We played in Malaysia before, we know they will have a lot of fans when we go there and they will support their team, but we will focus on our game on the field and there is no need to feel." Any additional pressure due to the noise of the house crowd. "

Defender Mika Chunuonsee expects a tough challenge against Malaysia on Saturday, but is confident that the two defending champions can bring a positive result to Bangkok for the second leg.

"It will not be easy," said the Welsh-Thai player. "Obviously they are a good team, they have done very well to get to the next round, I think that if we go with a game plan and the correct tactics, we can get the victory to take home."

"We have to do the hard work this week and we hope to go there and get at least a draw, but I'm looking for a win."