Persistence of memory in B cells: signs of stability in COVID immunity 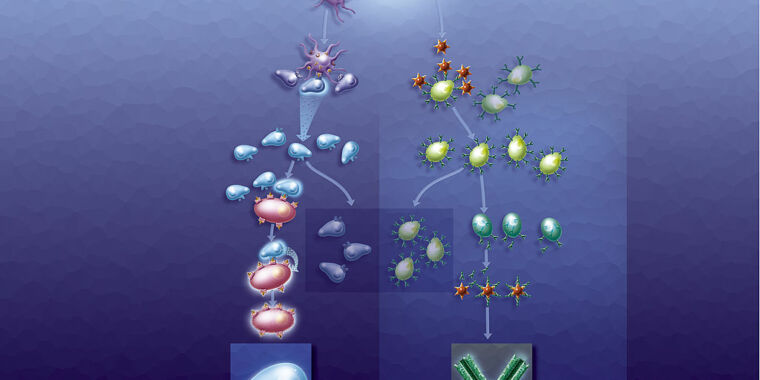 There is still much uncertainty as to how the immune system responds to the SARS-CoV-2 virus. But what has become clear is that despite the growing population of people exposed in the early days of the epidemic, re-infections are still very rare. This suggests that, at least in most people, the immune response to the virus has a degree of long-term memory.

But immune memory is complex and includes many specific immune features. It would be good to know which people are associated with SARS-CoV-2, as this will help us protect against vaccines and prior infections and better understand if there is a risk of memory loss. Early studies of this kind included all very small populations, but now there are a couple who have unintended reasons for optimism, suggesting that immunity will last for at least a year, and probably longer. But the picture is still not as simple as we might like.

The immune response requires coordinated activity of several cell types. There is an innate immune response that occurs when cells are infected. Different cells introduce protein fragments into immune cells to alert them to the identity of the invader. B cells produce antibodies, while different types of T cells perform functions such as coordinating the response and destroying infected cells. During all of this, a variety of signaling molecules regulate the strength of immune attack and induce inflammatory responses.

Some of the same fragments are recruited into the system that maintains the memory of the infection. These include various types of T cells that are converted into memory T cells. A similar thing holds for antibody-producing B cells, many of which express particular subtypes of antibodies. Fortunately, we have the means to identify the presence of each of them.

And this is the focus of a major study that was published a few weeks ago. Approximately 190 people who had COVID-19 were recruited, and details on all these cells were obtained for a period of up to eight months after infection. Unfortunately, not everyone donated every blood sample on time, so many populations were quite small; Only 43 individuals provided data for six months after infection, for example. There was also a large range of ages (age affects immune function) and severity of illness. Therefore the results should be interpreted carefully.

Months after infection, T cells in this population still recognized at least four different viral proteins, which is good news in light of the many variants in spike proteins that are developing. T cells that specialize in eliminating infected cells (CD8-expressing T cells), but were largely transformed into memory-maintenance. With a half-life of about 125 days, the number of cells declined over time.

Similar things were observed with T cells that are involved in the coordination of immune activities (CD-4-expressing T cells). Here, for the general population of these cells, the half-life was about 94 days, and 92 percent of those examined six months after infection had this type of memory cells. A particular subgroup interacting with antibody-producing B cells seemed relatively stable, with almost all still having more than six months of memory cells.

So overall, as far as T cells go, there are clear signs of memory establishment. It diminishes over time, but not so fast that immunity fades within a year. However, for most cell types tested, there are some individuals where certain aspects of memory go away for six months.

Like T cells, antibody-producing B cells can adopt a particular memory fate; Cells can also specialize in the manufacture of a variety of antibody subtypes. In the first paper both antibodies and memory cells were tracked. Overall, antibody levels specific for viral spike proteins dropped after infection with a half-life of 100 days, the number of memory B cells increased over that time, and remained on a plateau starting approximately 120 days post infection .

A second paper published this week looked at the trajectory of the antibody response in more detail. Again, this included a much smaller population of participants (87 in this case), but was monitored for six months. Half of them had some long-term symptoms after clearing their initial infections. According to earlier studies, the level of antibodies researchers found declined in the months following infection, falling anywhere from one-third to one-fourth, depending on the type of antibody. Apparently, people with high levels of antibodies during this period tend to have ongoing symptoms.

But when the team looked at antibody-producing memory cells, they noticed that antibodies were changing over time. In memory cells, there is a mechanism by which antibodies are encoded in parts of a gene. Continuing to select cells that produce antibodies with a high degree of affinity may lead to improved immune responses in the future.

It seems that these COVID patients are doing exactly that. At the time of the first sampling, researchers identified a sequence of several genes encoding antibodies against coronovirus proteins. After the time of the second check months, they were unable to find 43 of these early antibody genes. But 22 new ones were identified, which were generated by the mutation process – by six months, specific antibody genes raised between two and three times the number of mutations. In some cases, the authors were able to identify the paternal antibody gene that picked up the mutation to make one present in six months.

The system starts working. One of the early antibodies was unable to bind certain variants of the spike protein that have evolved in some coronav strains. But substitution, with more mutations, suggests that there was a higher affinity for the spike protein than the earlier version. While average antibodies had similar similarities at early and late time points, specific antibody pedigrees saw their ability to neutralize virus growth.

There are ways to preserve the spike protein for better antibody variants after cleaning up infections in the immune system, and that may be part of what’s going on here. But many of the participants (under half of those tested), still had signs of active SARS-CoV-2 infection in the gut, although nasal tests came negative. It is therefore possible that at least some of the better bonds come from continuous exposure to real viruses.

Let’s emphasize again: These are both small studies, and we really need to see them replicated with larger populations and more consistent samples. But at least when it comes to antibodies, the continuity between these two studies is a step towards instilling confidence in the results. And those results are very good: clear signs of long-term memory and the immune system’s ability to speed up its defenses seem to work against SARS-CoV-2.

In addition, T cell results, while more temporary, also hint at a longer term immunity. But there, as the results are not consistent, T cell persists in different patients with different aspects of immunity. The researchers divided the individual aspects into five categories and found that half of the population studied still had all five categories of memory present after five months. But at least three categories were present in 95 percent of them, suggesting at least some persistence of memory. At this point, however, we do not really understand what protective immunity would confer, so it is difficult to judge the meaning of these results.