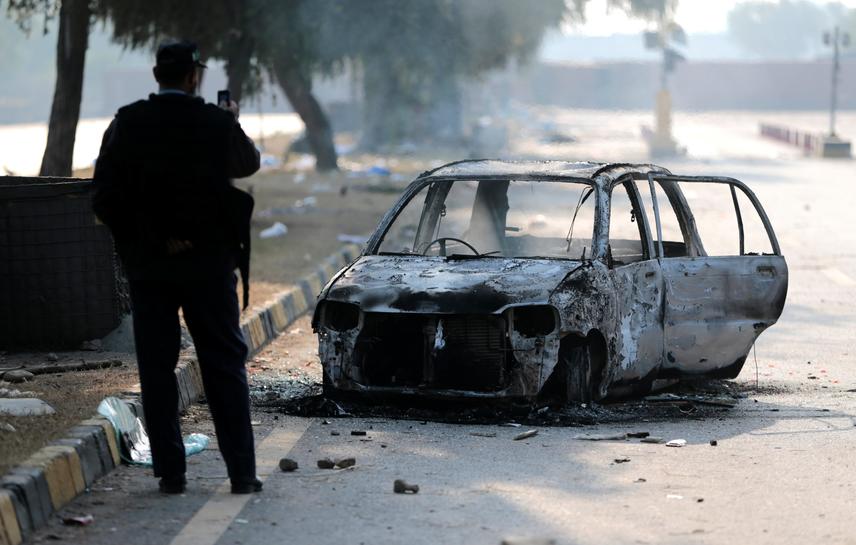 FAIZABAD, Pakistan (Reuters) – Activists from a hardline Islamist party clashed with security forces in the Pakistani capital and other cities on Sunday, authorities said, paralyzing Islamabad a day after a strike broke out. Failed cleaning operation killed several people and wounded about 150.

A policeman takes a picture of a car burned during the clashes near the Faizabad crossing in Islamabad, Pakistan, on November 26, 2017. REUTERS / Caren Firouz

Religious activists accuse a blasphemy minister of a change in the wording of an election oath burned several vehicles outside the capital before retiring in an uncomfortable clash at a protest camp they occupied for two weeks, said the police.

Despite orders from the civilian government to the army on Saturday night to help restore order, there were no military troops on the scene around the protest camp in Faizabad, outside the capital, witnesses said.

The army press department did not respond to inquiries about the government order.

On Sunday night, Interior Minister Ahsan Iqabal said the paramilitary force of the Rangers would be authorized to handle the demonstrations.

At least seven people, including a policeman, were killed the previous day, when several thousand security forces tried to disperse the protesters, according to local media reports and a provincial official

At least 187 people were injured in Saturday clashes, said the provincial official who asked not to be identified. Police superintendent Amir Niazi said at least 80 members of the security forces were among those injured.

In the eastern city of Lahore, thousands of Islamists camped in front of the provincial parliament and attacked a minister's house, prompting police to fire tear gas projectiles, a Reuters reporter testified.

On the outskirts of Lahore in the city of Faisalabad, his supporters attacked and tried to burn down another minister's house, said police officer Niaz Mirza.

Humo waved from the charred remains of a car and three motorcycles burned on Sunday morning near the protest camp.

On Saturday, protesters also set fire to seven prison trucks, three police vans, a television van and a service station, all of which were still smoldering the next day.

Activists from Tehreek-e-Labaik have blocked the capital's main road for the past two weeks in protest after blaming right-wing minister Zahid Hamid for changing the wording on an election oath proclaiming that Mohammad is the last prophet of Islam from "I swear solemnly" to "I believe", a change that according to the party is tantamount to blasphemy.

A pbader-by takes a selfie in front of a police prison van destroyed during clashes with police near the Faizabad crossing in Islamabad, Pakistan November 26, 2017. REUTERS / Caren Firouz

The government blamed the change on an administrative error and quickly changed the language.

"Our movement has spread throughout the country," Tehreek-e-Labaik spokesman Ejaz Ashrafi told Reuters.

"Thousands more people have joined us, we will remain here until our demands are met."

Directed by cleric Khadim Hussain Rizvi, Labaik is one of the two new ultrareligious political movements that have gained prominence in recent months. Labaik, who campaigns to maintain Pakistan's strict blasphemy laws, won a surprisingly strong 6 percent and 7.6 percent of the vote in two recent by-elections.

While it is unlikely that the Islamist parties win the majority, they could play an important role in the elections to be held in the summer of next year.

Laibak was born from a protest movement that praised Mumtaz Qadri, a bodyguard of the governor of the province of Punjab who shot his boss in 2011 for his call to reform the strict blasphemy laws.

By Sunday afternoon, orders had been issued to lift a block imposed the previous day on private television stations and social networking services.

After Saturday's crackdown by the police, the government asked for military badistance "for compliance with the law and order according to the constitution."

However, there has not been a public statement by the military in response and no sign that the troops have left their barracks.

On Saturday before the government order, Pakistan's army chief asked the civilian government to end the protest while "avoiding violence on both sides," said the military press wing.

The ruling party of former Prime Minister Nawaz Sharif, who was disqualified by the Supreme Court in July and faces a corruption trial, has a history of difficulties with the army, which in 1999 launched a coup to expel Sharif from a finished.

Interior Minister Iqbal said Sunday that the operation was not carried out under his supervision, and said that the city police acted directly under court orders.

"I thought we should give negotiations two or three more days," he told local Geo TV.

Iqbal had said on Saturday that the protests were part of a conspiracy to weaken the government, which is now administered by Sharif's allies under a new prime minister, Shahid Khaqan Abbasi.

"There are attempts to create chaos in (the) country," Iqbal said on state television in Pakistan.