Pakistan reaches an agreement with the Islamist protesters in Islamabad 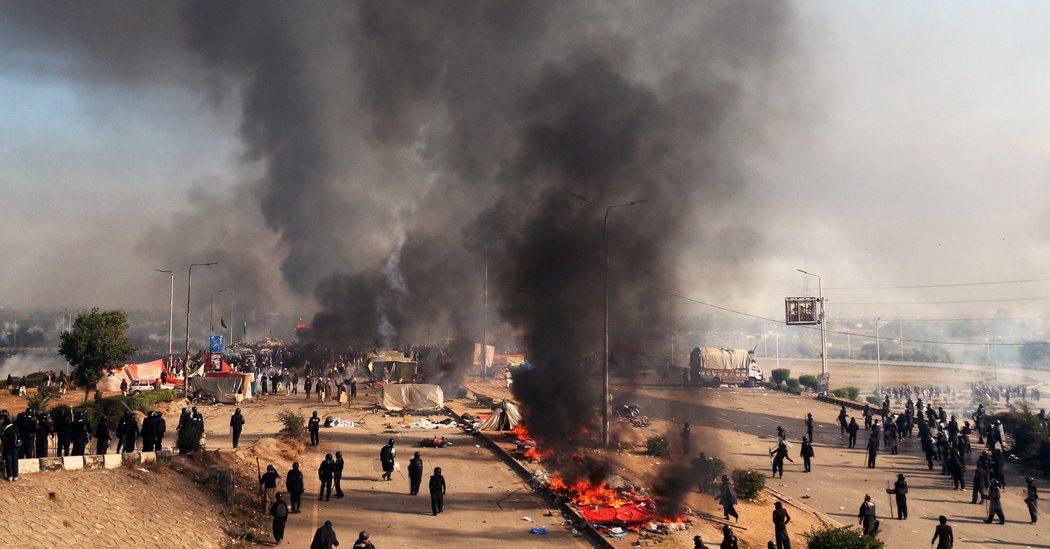 An attempt by the ruling party, the Pakistan-Nawaz Muslim League, to clear the protest site last Saturday ended in deadly clashes, with at least six protesters killed and more than 200 people injured.

The government was forced to suspend the operation, but the violence quickly spread to other parts of the country, especially in the province of Punjab, the most important political base for the ruling party. The house of the law minister there was attacked, and several other party figures were also under pressure.

On Sunday, Prime Minister Shahid Khaqan Abbasi met with General Qamar Javed Bajwa, Pakistan's army chief to discuss the crisis. The army chief said his troops would not use force to stop the protests, but agreed to safeguard important buildings around the capital, military officials said.

The Barelvi party protest began with the proposed changes to the oath of the incoming legislators, including the alteration of the language that declared the Prophet Muhammad as the last prophet of God.

Mr. Rizvi and other hard-line clerics said the changes, under the supervision of Mr. Hamid, the law minister, resulted in blasphemy, which appears in the country's laws as a capital offense. Even isolated accusations of blasphemy have led to lynchings or mob violence, and Mr. Rizvi has frequently used the topic to stoke indignation in sermons and party meetings.

The minister denied the accusation and published a video in which he claimed that he personally believed that Muhammad was the last prophet of God, and the government quickly abandoned the proposed changes to the oath. But efforts to placate Mr. Rizvi and other religious leaders failed, and demonstrations began three weeks ago.

The agreement signed in the early hours of Monday demanded the immediate dismissal of the Minister of Justice. In turn, the religious leaders badured that they would not issue an edict against him, apparently to make sure that the minister did not suffer more attacks; Accusations of blasphemy have often led to badbadinations of the accused. The agreement called for the release of all workers and supporters of Mr. Rizvi's party, in addition to asking the government to pay damages to public property.

A particularly revealing part of the agreement was a thank-you note to General Bajwa, the army chief, who was thanked for "saving the country from a great catastrophe." In some circles, the military has been criticized for being too tolerant, or even supportive, with extremist Islamist groups.

Maj. General Faiz Hamid, general director of the counterintelligence section of the Interservice Intelligence Directorate, the country's powerful intelligence agency, signed the agreement as the representative of the army chief.