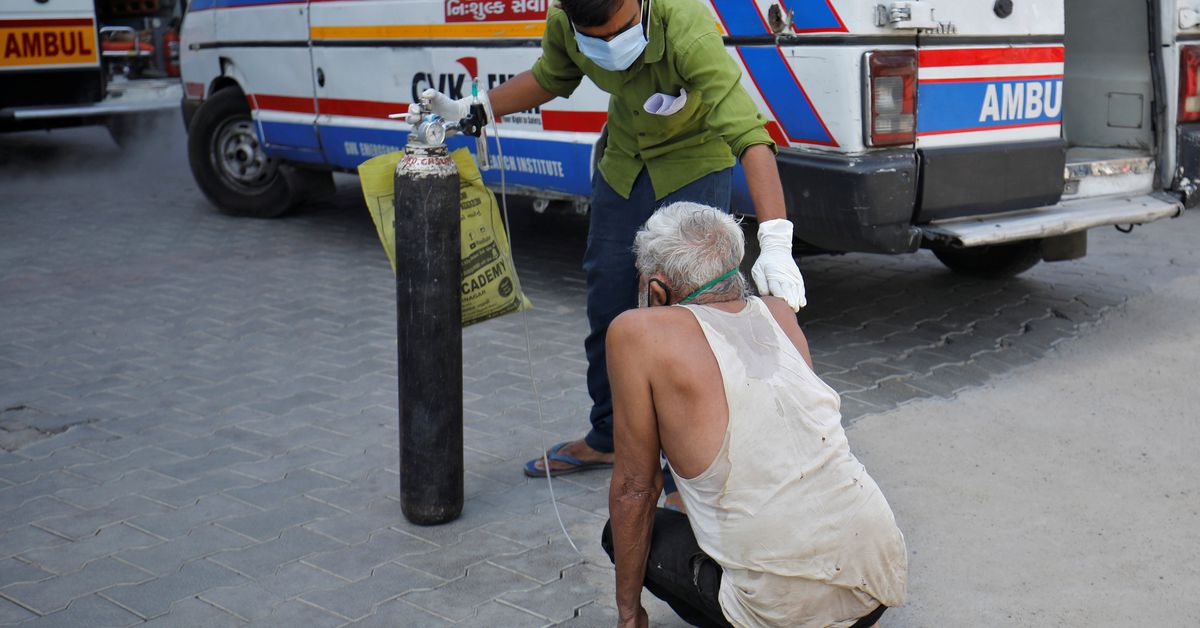 At least 22 patients died at a hospital in western India on Wednesday following a disruption in their oxygen supply caused by a tank leak, the health minister said, while a nationwide surge in coronavirus cases absorbs gas supplies.

The incident in the city of Nashik, one of the worst-hit areas in India, occurred after the oxygen tank leaked, said Rajesh Tope, the health minister of Maharashtra, the wealthiest state, where the city is located.

“Patients who were hooked up to ventilators at Nashik hospital have died,” Tope said in televised remarks.

“The leak was detected in the tank that supplies oxygen to these patients. The interrupted supply could be related to the death of the patients in the hospital.”

The world’s second most populous nation reported 295,041 new infections on Wednesday, the largest daily increase reported in any country, pushing its hospitals to the limit, authorities said.

The United States alone had a slightly larger one-day increase of 297,430 cases in January, though its count has dropped dramatically since then. India’s 2,023 deaths were also the highest in the pandemic.

In addition to the sense of alarm, the Serum Institute of India, which makes the AstraZeneca (AZN.L) COVID-19 vaccine, said it will be able to increase its monthly production to 100 million doses in July from 60 million to 70 million now. later than your previous end of May calendar.

The delay could slow down India’s immunization campaign, which the government has opened to all adults starting next month to try to stop the deadly second wave.

Hospitals in Delhi, the capital, and elsewhere have been warning that medical oxygen supplies given to seriously ill COVIOD-19 patients are running low as cases rise.

Max Healthcare, the largest private sector healthcare provider in Delhi and its suburbs, said some of its hospitals had just two hours of oxygen left.

“Over the past few days, the hospital has faced serious difficulties in obtaining an adequate and regular supply of oxygen,” he said in a statement.

“Currently, most of the hospitals in the network are working with dangerously low oxygen supply levels, which can cause a very serious adverse event for the patient,” said Max.

Television showed images of people with empty oxygen cylinders crowding filling facilities in the most populous state of Uttar Pradesh, as they rushed to save their affected relatives at the hospital.

The situation was so dire that some people had tried to loot an oxygen tanker, forcing authorities to tighten security, said the health minister of the northern state of Haryana.

“From now on, I have ordered police protection for all oil tankers,” Anil Vij told Reuters partner ANI.

Health experts said India had let its guard down when the virus appeared to be under control during the winter, allowing for large gatherings such as weddings and festivals.

India is now facing a coronavirus “storm” overwhelming its healthcare system, Prime Minister Narendra Modi said in an overnight national address, adding that authorities were working with states and private companies to deliver oxygen with “speed and sensitivity. “.

Modi himself faces criticism for addressing packed political rallies for local elections and allowing a religious festival to take place in which millions ritually bathe in the Ganges River, considered sacred by Hindus.

India has so far administered nearly 130 million doses of vaccine, the most in the world after the United States and China, but it is still small relative to its population of 1.35 billion people (https://tmsnrt.rs/3tlH6Gq ).

Vaccine doses have already been depleted in many states, although vaccines are currently restricted to front-line workers and those over the age of 45.