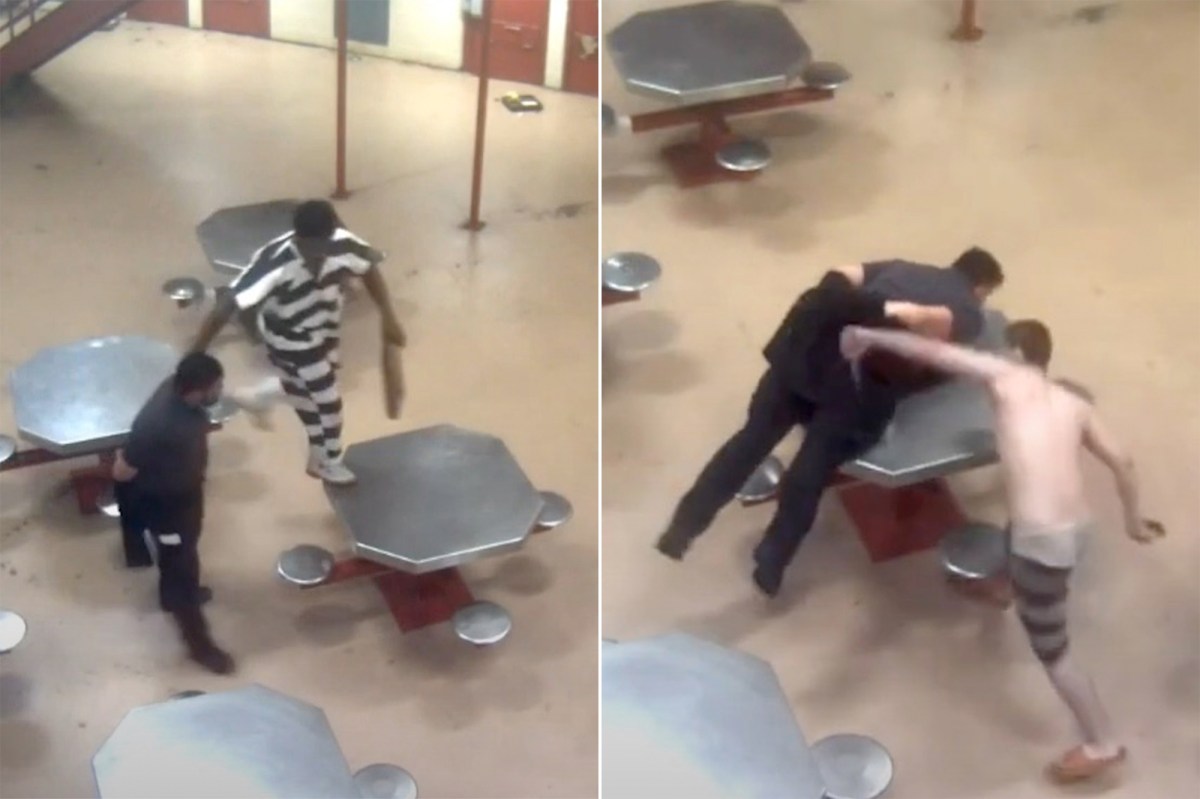 Inmates at an Oklahoma City jail held a guard hostage, beat him and stabbed him multiple times before one of the suspects was shot and killed, graphic video shows.

Heartbreaking footage of the hostage situation on March 27 at the Oklahoma County Detention Center shows inmate Curtis Montrell Williams, 34, being shot and killed while holding a makeshift knife to the neck of detention officer Daniel Misquez. .

Misquez, who was tied up and held captive for about an hour, is seen in surveillance footage being hit in the head and stabbed multiple times in the leg by a second inmate.

The guard was also pepper-sprayed with his own device, Oklahoma City Police Chief Wade Gourley told reporters on Friday, according to The Oklahoman.

Chaos erupted after inmates complained about conditions in the jail, claiming they had no running water and were not being fed, KFOR reported.

“What worries me a lot while watching this is [Williams] he puts the hostage on his knees in front of me and continues to hold that knife to his throat and that’s what the officers face when they come in, “Gourley told reporters about the images.

The officers who shot Williams during the incident, which was streamed live on social media – have been identified as Lieutenant Coy Gilbert and Officer Kevin Kuhlman. Both remain on administrative leave while the investigation continues, Gourley said.

Protesters outside the police department on Friday demanded that Gourley be fired for the incident, as Williams’ relatives claimed they killed him for seeking better conditions in the jail.

“I’ve known Curtis for 34 years and I’m sure he wouldn’t go out and kidnap anyone,” his mother, Rhonda Lambert, told The Oklahoman last week. “The conditions in prison made my son and many others like him lose self-control.”

Lambert said Gourley should resign for his handling of the incident and asked that Gilbert and Kuhlman face criminal charges.

A former inmate recently detained at the jail told the newspaper that inmates often deal with the lack of security there, as well as cockroaches and bed bugs.

“They have three men in a two-man cell, people sleeping on the floor,” said the former inmate. “Some toilets don’t flush or don’t have hot water … I told my people that they had to start talking to [reporters] in the news.”

Misquez was treated at a hospital for non-life-threatening injuries after being rescued, jail officials said. Gourley, meanwhile, refuses calls to resign.

“I haven’t seen anything here that could cause that,” Gourley said.