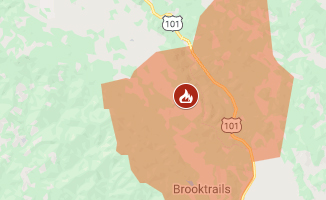 A blazing fire that began Monday afternoon in Mendocino County has forced evacuations, including the city of Wills.

Oak John was reported at 12:16 pm five miles north of downtown Willits off Big John Road. Resident Joseph Haggard told Willits News that he was on the flames of a 911 dispatcher’s phone reporting when he “heard a huge explosion that shook homes,” followed by several small explosions.

Evacuations were ordered within minutes for residents in Brooktrills, a subdivision subdivision.

As of 6:30 a.m., the fire was on 1,000 acres with no control, the Mendocino unit of California’s Department of Forestry and Fire Protection said. One structure was destroyed.

The evacuation was expanded over a 40-square-mile area with the southern end at Wills High School. That area is indicated by orange on the map above.

The latest updates can be found on the county’s official evacuation map.